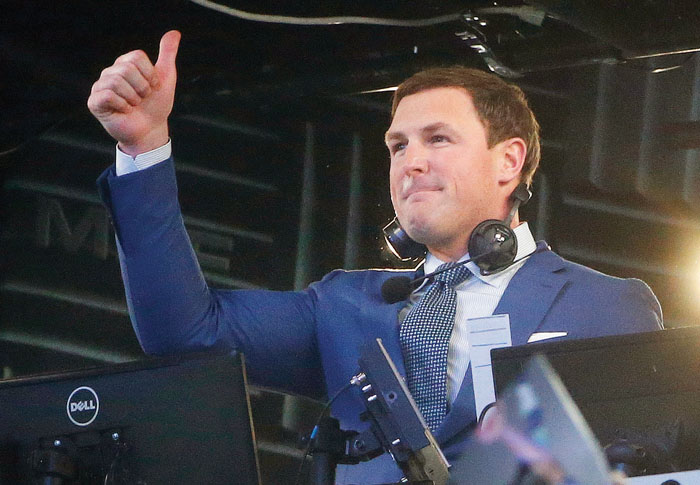 FILE - In this Nov. 5, 2018, file photo, former NFL player Jason Witten and broadcaster is recognized by the Dallas Cowboys before the first half of an NFL football game between the Cowboys and the Tennessee Titans in Arlington, Texas. Witten is coming out of retirement and rejoining the Cowboys after one season as a television analyst. The Cowboys announced Thursday, Feb. 28, 2019, that the 11-time Pro Bowl tight end had agreed to a one-year contract. (AP Photo/Michael Ainsworth, File)

By SCHUYLER DIXON, AP Pro Football Writer
FRISCO, Texas (AP) — Jason Witten said the hardest thing about deciding to retire nine months ago was leaving football without winning a Super Bowl with the Dallas Cowboys.
The 36-year-old tight end is giving it another shot.
Witten announced Thursday he is coming out of retirement and rejoining the Cowboys after one season as a television analyst. The 11-time Pro Bowler will play on a one-year contract worth about $5 million.
“The fire inside of me to compete and play this game is just burning too strong,” Witten said. “This team has a great group of rising young stars, and I want to help them make a run at a championship. This was completely my decision, and I am very comfortable with it.”
The closest Witten came to shedding a tear during an emotional farewell ceremony last May was when he turned to owner Jerry Jones and said, “The hardest part of this decision was knowing that I would never be able to hand you that Lombardi Trophy.”
In one year as the lead analyst for “Monday Night Football,” Witten must have seen enough in the Cowboys — mostly from afar — to think he can make good on his wish for the man who is now his boss again.
Quarterback Dak Prescott and running back Ezekiel Elliott are coming off their first playoff victory, which came two years after losing their postseason debuts as rookie sensations in the divisional round against Green Bay, a loss that had the distinction of being Witten’s final playoff game — so far.
Prescott, the 2016 NFL Offensive Rookie of the Year, and the two-time league rushing champion Elliott helped Dallas recover from a slow start this past season to win the NFC East and beat Seattle in the wild-card round.
The Cowboys lost a divisional game at the Los Angeles Rams, making it 23 consecutive seasons without even reaching the NFC championship game since the last of the franchise’s five Super Bowl titles following the 1995 season.
Witten has been around for well more than half of that lengthy drought, sharing a franchise record of 15 seasons in Dallas with three others who also spent their entire careers with the Cowboys.
A 16th season will add to a list of club records that includes games, starts, catches and yards receiving. And he’s returning with the Twitter blessing of 40-year-old Dallas Mavericks star Dirk Nowitzki , who just set an NBA record with his 21st season with the same franchise.
Witten’s decision to join ESPN’s crew came a year after quarterback Tony Romo, his longtime teammate and best friend, made the same move with CBS. But their receptions were dramatically different.
Romo was praised from the beginning two seasons ago for his ability to see what was going to happen before the snap, and the delivery resonated with fans. His reputation grew further during the AFC championship game in January.
Witten’s transition wasn’t nearly as smooth , and he was frequently criticized. Most notably, Witten was grilled for saying Green Bay quarterback Aaron Rodgers pulled “another rabbit out of his head” with a tying touchdown pass late in a 33-30 overtime win against San Francisco.
“We thank Jason for his many contributions to ‘Monday Night Football’ and to ESPN over the past year and wish him continued success,” the network said in a statement. “We have seen many former coaches and players go into broadcasting before eventually returning to the game they love, so we understand Jason’s desire to return to the Dallas Cowboys.”
Dallas struggled at tight end without Witten. Geoff Swaim was the most productive before his season ended with a broken wrist after 10 games. Blake Jarwin tied a club record for touchdown catches by a tight end in a game with three in the regular-season finale against the New York Giants. Those were all three of Jarwin’s touchdowns as he had 27 catches for 307 yards. Swaim had 26 catches for 242 yards with one TD.
Swaim got the bulk of the playing time before his injury because of his ability as a blocker, whereas the Cowboys believed Jarwin needed to work on that part of his game. With Witten, the Cowboys get back someone coach Jason Garrett believes is one of the best two-way tight ends in NFL history.
Witten had four 1,000-yard seasons, mostly recently with 1,039 yards in 2012 when he set an NFL record for tight ends with 110 catches. Philadelphia’s Zach Ertz topped that with 116 this past season.
In 2017, Witten broke Hall of Famer Michael Irvin’s club record of 11,904 yards receiving, finishing with 12,448 to go with 1,152 catches. He is the Dallas leader in receiving touchdowns by a tight end with 68.
Witten and Tony Gonzalez are the only NFL tight ends with at least 1,000 catches and 10,000 yards receiving. Gonzalez was voted into the Pro Football Hall of Fame in his first try this year. Witten is postponing consideration of his date with Canton.
___
More AP NFL: https://apnews.com/tag/NFL and https://twitter.com/AP_NFL