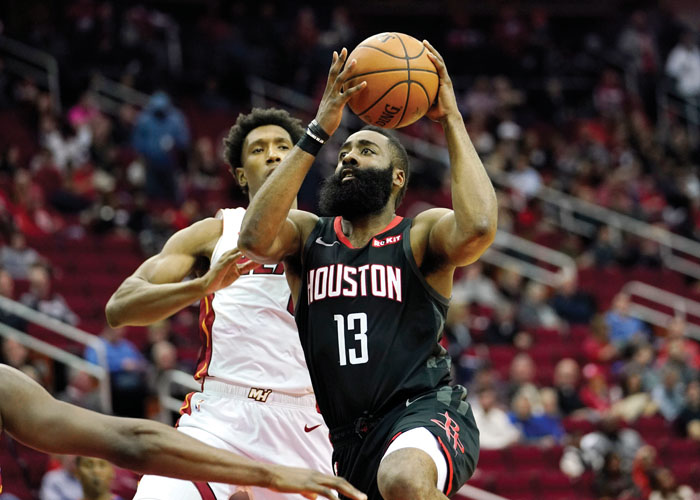 Houston Rockets' James Harden (13) goes up for a shot as Miami Heat's Josh Richardson defends during the second half of an NBA basketball game Thursday, Feb. 28, 2019, in Houston. The Rockets won 121-118. (AP Photo/David J. Phillip)

HOUSTON (AP) — James Harden had 58 points, 10 assists and seven rebounds and the Houston Rockets overcame a 21-point third-quarter deficit to beat the Miami Heat 121-118 on Thursday night.
Harden made 8 of 18 3-pointers and was 16 of 32 overall from the field and 18 of 18 on free throws. He fell three points short of his career high set at New York on Jan. 23, and had the most point ever against the Heat — breaking Willie Burton’s mark of 53 for Philadelphia on Dec. 13, 1994.
Austin Rivers scored 17 points, and Chris Paul and Gary Clark each had 14 to help Houston win its fourth straight game. The Rockets shot 49 percent, including 19 of 46 on 3-pointers.
Kelly Olynyk and Goran Dragic each had 21 points for Miami, Justise Winslow added 19 points and eight assists, and Josh Richardson had 18 points. The Heat shot 52 percent, making 15 of 28 3-pointers.
Miami was coming off a home victory over Golden State on Wednesday night on Dwyane Wade’s banked 3-pointer at the buzzer. Houston played at Charlotte on Wednesday night.
76ERS 108, THUNDER 104
OKLAHOMA CITY (AP) — Tobias Harris scored 32 points and Ben Simmons had a triple-double to help Philadelphia beat Oklahoma City.
Harris had his highest point total in eight games with Philadelphia since coming off in a trade with the Los Angeles Clippers. Simmons had 11 points, 13 rebounds and 11 assists for his ninth triple-double of the season.
Star center Joel Embiid missed his fourth straight game because of left knee soreness.
Russell Westbrook had his 25th triple-double of the season for Oklahoma City, finishing with 23 points, 11 rebounds and 11 assists. Thunder forward Paul George sat out with soreness in his right shoulder.
MAGIC 103, WARRIORS 96
ORLANDO, Fla. (AP) — Aaron Gordon had 22 points and 15 rebounds, Terrence Ross added 16 points and Orlando rallied in the final three minutes to beat Golden State.
A night after they were stunned in Miami by Dwyane Wade’s buzzer-beater, the Warriors blew an 11-point lead in the fourth quarter and lost for the fourth time in six games.
D.J. Augustin scored 14 points and Nikola Vucevic had 12 points and 13 rebounds to help Orlando end an 11-game losing streak to the Warriors. Orlando’s last win over Golden State was on Dec. 14, 2012.
Stephen Curry scored 33 points, but was only 1 for 6 in the fourth quarter. Klay Thompson and DeMarcus Cousins each had 21 for the Warriors. They played without Kevin Durant (rest) and Andre Iguodala (sick).
JAZZ 111, NUGGETS 104
DENVER (AP) — Donovan Mitchell scored 24 points, including six in the final two minutes, and short-handed Utah ended Denver’s nine-game home win streak.
Kyle Korver added 22 as the Jazz showed plenty of energy despite playing on the second night of a back-to-back and with two of their guards out of the lineup. Utah led by as many as 18 points in the third quarter, only to see the lead trimmed to five with 8:41 remaining. Korver helped the Jazz on a 13-0 run to gain some separation and send them to their third straight victory.
Jamal Murray and Will Barton each had 21 points for Denver. All-Star big man Nikola Jokic dealt with foul trouble but still finished with 16 points, 13 rebounds and seven assists.
PACERS 122, TIMBERWOLVES 115
INDIANAPOLIS (AP) — Bojan Bogdanovic scored a season-high 35 points and Indiana overcame Karl-Anthony Towns’ big night for Minnesota.
Towns had 42 points and 17 rebounds, scoring 23 points and grabbing seven rebounds in the first quarter.
Tied at 107, the Pacers closed with a 15-8 run, with Bogdanovic scoring 11 points.
CAVALIERS 125, KNICKS 118
NEW YORK (AP) — Kevin Love scored 26 points, Jordan Clarkson and Collin Sexton each had 22 and Cleveland overcame a 14-point deficit in the fourth quarter to beat New York.
Allonzo Trier scored 22 points for the Knicks.
___
More AP NBA: https://apnews.com/tag/NBAbasketball and https://twitter.com/AP_Sports