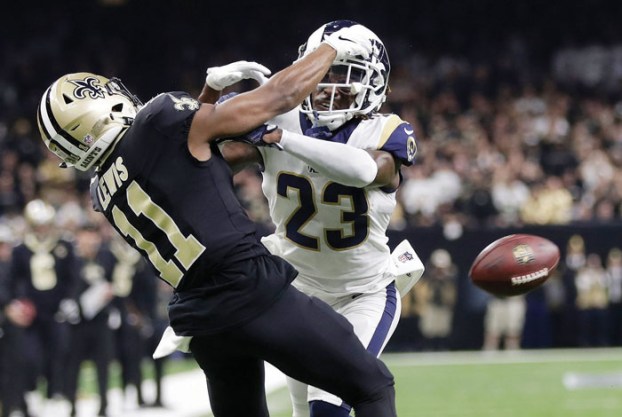 FILE - In this Jan. 20, 2019, file photo, Los Angeles Rams' Nickell Robey-Coleman breaks up a pass intended for New Orleans Saints' Tommylee Lewis during the second half of the NFL football NFC championship game in New Orleans. The NFL’s competition committee discussed the league’s replay system during its annual meeting in Indianapolis but reached no consensus on possible changes. And it may not recommend any major alterations. Officiating and the use of replays have been under scrutiny since a missed pass interference call and helmet-first hit in the final two minutes of the NFC championship game helped the Los Angeles Rams force overtime and eventually reach the Super Bowl. (AP Photo/Gerald Herbert, File)

INDIANAPOLIS (AP) — John Mara hears the cries to change the NFL’s replay system. He doesn’t think it has the votes.

After the New York Giants owner emerged from the competition committee’s annual meeting in Indianapolis, Mara told a handful of reporters he doesn’t anticipate significant changes coming to the system, which returned to the league in 1999.

Any rule change requires a 24-vote threshold to pass. Right now, committee members continue to listen to those involved. On Tuesday, it was the game officials. Later this week, it will be the coaches and general managers. At Phoenix, in March, the owners will weigh in — and they are the ones with the power to alter the rules.

But no formal proposal or recommendation is on the table.

Fans and many media members have vociferously expressed displeasure with the system since a blown call late in the NFC championship game — officials missed a blatant pass interference penalty and a helmet-first hit by the Rams’ Nickell Robey-Coleman deep in Los Angeles territory. The non-calls helped Los Angeles force overtime and eventually win the game to reach the Super Bowl.

Mara knows all about that, too. And he also recognizes what repercussions can result from major alterations.

“Are you going to look for one area or check the entire offensive line?” Mara said. “I think you get into a lot of areas with a lot of unintended consequences, and I just don’t think there is a lot of sentiment for going in that direction at this point.

“We had a group of officials in there and I don’t think there was a lot of support from them about sending it upstairs or sending it to New York.”

Atlanta Falcons President Rich McKay, the chairman of the competition committee, noted that supporters of expanding replay could seize on the tide of complaints about the NFC title game. He stressed that the committee will continue to have “healthy discussions” on the subject.

McKay also said the committee is looking into the on-field celebrations that included players — or even non-players — coming from the sideline.

“So there is some concern about that and it’s something I am sure we will put into the book as a reminder,” he said of limiting the number of participants in those celebrations.

Feedback on the stricter rules against use of the helmet for hits on opponents has been positive, McKay said.

“We certainly like the numbers that showed up, from an injury standpoint,” he said of concussions and helmet-to-helmet hits declining. “It appears the players (learned) and coaches did a good job of teaching, but there is a period of adjustment; these players didn’t play with this rule for a long, long time — meaning their entire careers.

“We know there is an adjustment period for on-field officials and we went through that a lot as a committee and looked at a lot of plays. They remain confident that, just like with the defensive player (rule), they will get better at it as they look for it more, and I think we are confident we will see less of these potential fouls because the players will get comfortable with it.”

NEW YORK (AP) — Baseball players and management appear headed to early labor negotiations that could lead to significant economic changes in the collective bargaining agreement and possibly a new deal past the current expiration of December 2021.

Management backed off its desire for a pitch clock this year in a proposal to the players’ association on Tuesday, putting off most on-field changes to 2020 at the earliest. The union quickly made a counteroffer Wednesday, and the biggest alterations still being discussed for this year are a single trade deadline, most likely on July 31, and lowering the number of mound visits without a pitching change from six to five.

While players have proposed major initiatives that impact economics, such as expanding the designated hitter to the National League and adding provisions that make rebuilding rosters with young players less attractive, management has been focused on on-field issues thus far. Management told the union it would be willing to discuss larger economic issues as part of talks that could lead to a longer labor contract.

Details were disclosed to The Associated Press by people familiar with the negotiations who spoke on condition of anonymity because talks were ongoing. Many aspects of management’s latest proposal were first reported by ESPN.

Among the items put off until 2020 at the earliest are several where an agreement could be reached soon:

— a three-batter minimum for pitchers.

— increasing the minimum regular injured list and option recall period for pitchers from 10 days to 15.

— a new rule that position players could pitch only from the ninth inning on, or from the sixth inning on when their team trails by seven runs or more.

The sides remain in discussion over starting extra innings of the All-Star Game and of spring training games with a runner on second base and ending spring training games after 10 innings. They also are discussing experimenting with shorter between-inning breaks combined with televising the start of innings on split-screens alongside commercials.

A single trade deadline would replace the current rules, which have a July 31 deadline for trades without waivers and an Aug. 31 deadline to acquire players who would be eligible for that team’s postseason rosters.

While unilaterally making the decision to experiment with a 20-second pitch clock during spring training this year, management has offered not to pursue a pitch clock in the regular season through 2021. Management has the right to implement a clock in games that count, but baseball Commissioner Rob Manfred has said he is reluctant to take that step without players’ agreement.

Baseball has had 12 collective bargaining agreements starting with the first in 1968 and has never held mid-agreement talks that led to an extension or new deal. The only mid-agreement extension was reached in the settlement of the 1981 midseason streak, in which management gave players credit for major league service during the 50-day walkout in exchange for extending the deal by one year through December 1984.

The NFL and NBA have reached new deals in mid-agreement, motivated by uncapped final years in the football contract and opt-out provisions in the basketball contract.

After experiencing eight work stoppages from 1972-95, baseball has enjoyed a quarter-century of labor peace. But players have become angry because of two straight slow free-agent markets that has seen many deals reached on the eve of spring training or with workouts already underway. St. Louis pitcher Adam Wainwright has talked about the possibility of a strike.

Union head Tony Clark and players have accused rebuilding teams of tanking, a charge management denies. Manfred maintains clubs have the right to rebuild with youth as they please.

The 2012-16 labor contract imposed limits on bonuses for amateurs residing in the U.S., Canada and Puerto Rico, and the 2017-21 deal capped spending on international amateurs. In addition, the current deal raised the top luxury tax rate for repeat offenders from 50 percent to 95 percent, which has impacted behavior among the highest-spending teams.

Because of management’s success under the current deal, some team owners may be reluctant for mid-agreement negotiations. However, overall attendance has dropped in three straight seasons, the average last year fell below 30,000 for the first time since 2003 and six ballparks set record lows for a season. MLB attributed the drop largely to bad weather last spring.