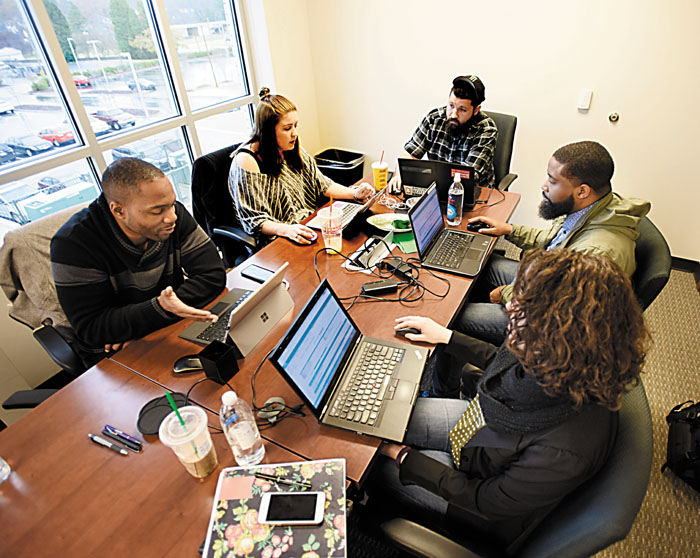 SALISBURY — Local teachers are studying for their master’s degrees for free, thanks to a program provided by the University of North Carolina at Charlotte.

“We’ve found this district to be incredibly hospitable and inviting to us, very engaged in the development of a strong teaching force,” Jones said. “Many districts are hiring teachers who have no degree and allowing them to literally learn on the job. RSS seems to understand the value of a master’s degree and all the things that come along with one: communication skills, leadership, research skills, how to nurture community and school partnerships, justice.”

In 2015, Jones and Heafner decided UNCC’s master’s content was no longer relevant. Adolescents are different today and the way teachers teach is different, Jones said.

Armed with a grant from the Goodnight Foundation, the educators offered a new master’s program in Union County, thinking it was a one-time deal.

But the graduate school was impressed with their results and suggested a master’s program to reach out to high-needs counties? Jones said she and Heafner had the freedom to go wherever they deemed appropriate. They chose Stanly County next and repeated the Union model. The school paid for tuition, and students paid for fees and books.

“Stanly was such a success,” Jones said. “The graduate school said, ‘OK, you can do it again.’ They are holding back state dollars because they believe in the value of this program.”

The educators held simultaneous sessions in Stanly and Rowan and then went to Iredell County.

“The teachers helped us understand how to individualize the program for their needs,” Jones said. “After Iredell the grad school said, ‘Let’s do it again.’ We met with the district office and asked are there enough teachers in Salisbury?”

Using the first cohort to recommend the program to other teachers, the graduate school is offering free master’s degrees for a second time in Rowan County.

There are 29 students in this year’s cohort. Many come from neighboring counties – Mecklenburg, Cabarrus and Davie.

The program works hard to keep all the cohorts connected so that after school is over, it has a deep network of teachers who can support each other and share strategies and experiences.

Jones says student culture changes about every three to four years: what they value, how they learn, use of technology, options in charter and private schools, proportions in immigrant students.

“Things shift so rapidly in students, schools have to remain flexible to respond to their changing needs,” Jones said. “Additionally, a child in early adolescence – fifth through ninth grade – can grow up to 20 inches and gain up to 50 pounds of weight. Multiply that by 20-something students in a classroom and they are all worried about what is happening to them. Are you going to tell them, ‘Sit down and let’s focus on algebra’?”

The master’s program is a hybrid program, partially online and partially face-to-face. Some classes are held on Saturdays at the district office, with the remainder online. It includes 33 hours, 11 courses, and a year and a half of study, including a full summer.

Heafner taught the session on models of teaching, in which teachers examined the world through their students’ eyes. They looked at social mediaand at TV. Once they realized things about their kids, they looked at how their curriculum met their needs. With that deeper knowledge of who the kids are, Jones said, teachers were able to identify what was and was not working in the classroom.

Some of the issues they revealed were archaic homework policies, needs of students in poverty and inadequate mentoring for new teachers.

“As a result,” Jones says, “teachers modified their classrooms to accommodate for children of poverty. It may be as simple as keeping a snack drawer in the classroom; re-evaluating the homework policy for children living in a car; recognizing transportation issues for after-school programs.

“Teachers were catapulted into an area of personal growth, which led to professional growth and impacted the classroom.”

One study group of student-teachers in the Rowan cohort learned more about themselves as they learned about each other. While some teachers recognized poverty in rural trailer parks, others saw it in urban public housing. Rural kids may not have access to internet while urban kids have access but cannot afford it. Rural kids may take it for granted to have a gun around; for urban kids, guns mean something different altogether.

Amber Quinn travels over an hour for classes in Salisbury.

“I felt I would be all alone. I was the only person from my county,” Quinn said. “But here I am with five new best friends, and someone is checking on me every day. I didn’t want to do it alone, and I have a great support system. It’s been amazing.”

Amber’s husband is also a teacher. He started working on his master’s in art, all online, in the summer.

Ashley Eyer said, “I went into this selfishly, wanting to get what was in it for me. But the focus this semester has been learning about our kids. We’ve learned about their brains and their bodies, and now I understand more. Also, they identify more with me; I’m in the same position they are. They are asking me, ‘Did you get your paper done?’ – so we are connecting in a beautiful way.”

Ellen Annas says, “Everything we’ve done has been so applicable to me and my classroom. Just in the last six weeks, I’ve observed more engagement in my students. I kind of knew these things before, but now I have the research and data to back it up. Before I knew sort of that I should integrate these things into my class, but now I know why.”

Starting master’s work was a challenge for Jenna Mangano. The first day of class was overwhelming, she said.

“But with each class you see the benefit, you get the support, you learn time management,” Mangano said. “It’s been a huge thing for me. I thought I was busy before, but now I’m like, ‘I’ve got class on Saturday.’”

She said her husband cares for their children, offers support when she’s overwhelmed, sends her articles, listens when she needs to vent and gives her praise.

Temeia Williams had some significant life changes just as the program started, but Jones offered words of support and asked about ways she could help.

“I had no idea what she really meant, what it would be, all at the beginning of the school year. I had new students, changes in curriculum, and personal stuff. We had projects due. I was nuts,” Williams said. “My group members didn’t really know what was going on. Some assignments, I couldn’t focus, but I got through.

“Dr. Jones said, ‘You will be a stronger mother, a better teacher.’ I trusted her, and I’m here today.”