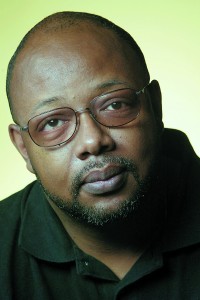 There’s an old song that always comes to mind at times like this.

“I’m Gonna Make You Love Me” — a 1968 hit for the Temptations and the Supremes — is a litany of lavish promises: “Every minute, every hour, I’m gonna shower you with love and affection — look out, it’s coming in your direction. I’m gonna make you love me.”

As boy meets girl sentiment, it is harmless and sweet. But as government policy, it is something else, entirely. What does it mean, after all, when the state says, “I’m gonna make you love me”?

For an 11-year-old black boy in Lakeland, Florida, it meant being arrested.

It happened earlier this month — the story came to widespread attention only last week — after the child, whose name has not been released, refused to join his class in expressing love of country. Which is to say, he defied a substitute teacher’s order to stand and say the Pledge of Allegiance. The Pledge, he said, represents racism.

There followed a standoff with the sub who probably didn’t know and maybe didn’t care that the boy has been refusing to take the pledge all year. As reported by Bay News 9, a TV station in St. Petersburg, which obtained the teacher’s written statement, she asked why he didn’t go somewhere else to live if America is so bad.

She said the boy responded, “They brought me here.”

The teacher said she told him, “Well, you can always go back, because I came here from Cuba and the day I feel I’m not welcome here anymore I would find another place to live.” Thereby equating her decision to flee a totalitarian regime with the kidnapping at gunpoint of this child’s ancestors.

Compounding her cluelessness, the woman called administrators, who called police. They claim the boy was arrested because he became disruptive, refused to follow instructions and resisted arrest without violence.

That feels like a lame excuse for an indefensible overreaction, especially given that school policy — and a little thing called the First Amendment — give him the right to opt out of the pledge. Small wonder a prosecutor has declined to prosecute.

And here, one might declaim about how readily schools criminalize ordinary disciplinary issues where children of color are concerned.

One might also observe that doing so rather proves the boy’s point about the pledge. But leave that for another time. Focus instead on the coercive thing the state sought to do: make this boy love — or say he loves — America.

As the ongoing argument over Colin Kaepernick and the recurring debate over flag burning suggest, many of us have an unfortunate taste for forced patriotism. It’s worth noting that in 1940, the Supreme Court upheld the expulsion of two young Jehovah’s Witnesses from a Pennsylvania school after they refused to recite the Pledge on religious grounds.

It’s also worth noting that just three years later — on Flag Day, no less, in the middle of World War II — the court reversed itself. Writing for the majority, Justice Robert H. Jackson stated the obvious: “To believe that patriotism will not flourish if patriotic ceremonies are voluntary and spontaneous instead of a compulsory routine is to make an unflattering estimate of the appeal of our institutions to free minds.”

In other words, love you have to coerce is not love at all, something too many Americans still cannot get through their heads — including, apparently, a certain teacher from Cuba. As a pop song, “I’m Gonna Make You Love Me” was flirty and fun.

Isn’t that what people leave Cuba to escape?

This past week, Salisbury lost one of its loveliest and most gracious citizens. Patsy Reynolds gave so much of herself... read more