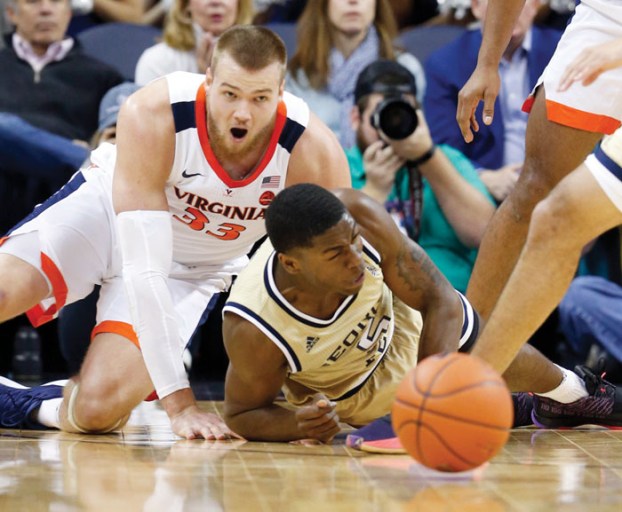 The Cavaliers (25-2, 13-2 Atlantic Coast Conference) trailed 11-7 before a 3-pointer by Braxton Key sparked the eight-minute surge. Hunter had nine points, Kyle Guy six and Jerome five in the burst. Virginia’s lead was 41-22 at halftime and 51-24 after a 10-2 run to start the second half as the Cavaliers won their fifth in a row in the series. Guy added 11 points and three others had eight.

Georgia Tech: The Yellow Jackets are very young with only two seniors on the roster, and neither Abdoulaye Gueye nor Brandon Ashton contributed much until Gueye made a few baby hooks in the second half.

Virginia: Coach Tony Bennett went with a new starting five of freshman guard Kihei Clark, Jerome, Guy, Hunter and Mamadi Diakite. It’s the third game in a row Bennett has juggled combinations, with Jack Salt and Braxton Key also getting starts in that span. Salt had started every ACC game before Wednesday night.

Tennessee (25-3, 13-2 Southeastern Conference) bounced back from a tough loss to LSU on Saturday with a hard-fought victory over the Rebels. The Volunteers remain in a three-way tie atop the SEC with LSU and Kentucky.

From that point forward, it was a back-and-forth struggle. Ole Miss guard Breein Tyree missed the front end of a one-and-one with 18 seconds remaining, Tennessee grabbed the rebound and Williams hit a driving layup in the lane to make it 72-71.

Ole Miss (19-9, 9-6) had one more opportunity in the final seconds, but Devontae Shuler was called for a charge while shooting a deep 3-pointer with a second left. Tyree and Davis led the Rebels with 16 points each.

Tennessee scored the first eight points and led for most of the first half. Ole Miss rallied in the final minutes to take its five-point halftime lead.

No Ole Miss players knelt for the national anthem before the game.

The minutes before the game were highly anticipated after eight Mississippi players kneeled during the anthem in response to a Confederacy rally near the arena before the Rebels’ 72-71 victory over Georgia on Saturday.

But there were no obvious demonstrations before the Tennessee game, with players standing in their usual spot along the free throw line in front of the Ole Miss bench.

Tennessee: It was a huge bounce-back win for Tennessee, which got the clutch shot it needed from Williams in the final seconds. Lamonte’ Turner added 17 points on 8-of-12 shooting from the field.

Ole Miss: A tough loss for the Rebels, who likely would have assured themselves a spot in the NCAA Tournament with a win. Bruce Stevens was a bright spot with 10 points and 10 rebounds.

Tennessee: Returns home to face No. 4 Kentucky on Saturday.