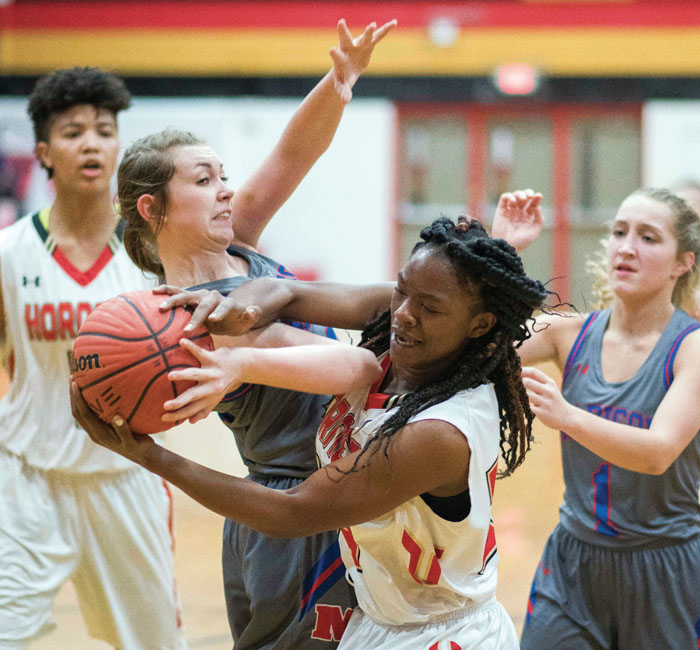 SALISBURY — With 48 seconds left, Salisbury girls coach Lakai Brice smiled for the first time on an intense night, walked purposefully to the end of the bench, and silently bumped fists with senior Bryanna Troutman.

Payback was on the menu, and Troutman ate heartily on Thursday night in the SHS gym. She had 22 points, 10 rebounds, nine blocks and five assists as the second-seeded Hornets crushed Madison, 63-44, in a 2A second-round matchup. Troutman had 19 points by halftime and rejected everything Madison put up in the paint. On one possession, she produced back-to-back swats. On another Madison offensive foray, she blocked a shot, started a break, and then finished it as she was fouled.

“Revenge,” the Wingate-bound Troutman said quietly. “This was revenge. We lost to that same team at home in the second round and ended my sophomore season. It wasn’t going to happen again. Not my senior year.”

As was the case two years ago, 18th-seeded Madison (17-11) was over-matched athletically. The difference this time was that the Hornets were a lot more disciplined, a lot more mature and a  lot more together than they were in 2017. Two years ago, Salisbury launched way too many 3-pointers and negated its physical advantage. This time the Hornets hammered the ball into the paint and powered in layups. Madison had no answer for the strength and tenacity of Troutman, Tacorra Robinson (10 points) and Jaleiah Gibson, who chipped in with six points.

“Tacorra was sitting out with a knee injury and had to watch when we lost to Madison two years ago,” Brice said. “This might have been the best game she’s ever played.”

This is a deeper Salisbury squad than the one the Hornets had two seasons ago. All-county standouts Troutman and Anayia Fulson are still around, but now Tacorra Robinson is healthy, freshmen Rachel McCullough and Gibson are already good players, and little guards Jinika Glenn and Chantal Robinson give the Hornets crazy bursts of intensity. Those two pestered Madison ballhandlers into turnovers.

Salisbury started fast. It was 7-2 out of the gate. When Troutman dished to Chantal Robinson for a bucket it was 16-6 after six minutes, and Madison’s Patriots couldn’t get anything to fall. After a quarter, Madison had one field goal and the Hornets (24-4) led 19-8.

“Our coaches told us that our defense was going to win this game,” Chantal Robinson said. “We came out fast. We jumped on them.”

Madison settled down in the second quarter, made free throws and got 3-pointers from Hannah Chandler (15 points) and Alex Nix to stay within 35-24 at halftime. But Troutman had made it to halftime, not only with 19 points, but with just one foul. She had blocked and altered numerous shots without getting into foul trouble. That’s always the critical element for the Hornets. Troutman, about 6-foot-1 and a beast athletically, is the difference-maker on both ends.

“We stressed to Bryanna that she couldn’t get any silly fouls tonight,” Brice said. “We needed her on the floor, and she stayed out of foul trouble and just had a tremendous game. She’s always played to win, but she was better than usual tonight.”

Fulson, Salisbury’s floorleader, did have three fouls at halftime, but Glenn and Chantal Robinson were playing so well that the Hornets were able to mix and match and rest Fulson when they needed to.

Fulson still managed 12 points — some of them spectacular — and six assists.

When the second half began with a Troutman-to-Gibson layup and a Fulson-to-Tacorra Robinson layup, the Hornets surged ahead by 15. Then McCullough got loose for a right-wing 3-pointer and the Hornets led by 18. They were headed for a relatively easy victory.

Salisbury led by 21 after three quarters. Troutman, her work done, was able to relax and sit down for good with 2:20 remaining. She smiled and cheered as she watched her teammates finish things off.

“We picked up the energy tonight and everyone did their part,” Troutman said. “I didn’t score as much in the second half, but I was able to get my teammates involved.”

McCullough didn’t score like she normally does, but she was a factor as Salisbury pulled away early in the second half. She’s more than a a shooter. She rebounded on the defensive end, helped push the ball, and made a couple of steals.

“Our communication on defense was great tonight,” McCullough said.

The Hornets’ stunning 58-46 setback to Madison in the second round two years ago had been one of the low points of Brice’s coaching career at Salisbury and abruptly ended a 21-3 season.

She talked to the team about that disappointing night before this rematch. Then her team went out and made her proud.

In the third round on Saturday, the Hornets will host 10th-seeded Surry Central, a 35-34 upset winner over East Rutherford.