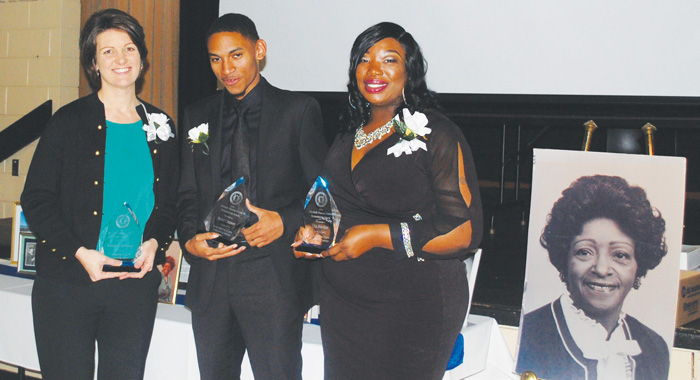 SALISBURY — For the 30th anniversary of the death of Elizabeth Duncan Koontz, her legacy and those who carry it on by serving youths were recognized Thursday night.

At an annual awards ceremony at the Salisbury Civic Center, the Elizabeth Duncan Koontz Committee honored Myles Cannon, Meredith Williams and Ola Nwafor for their impact in the community.

Nwafor was recognized for establishing the Born Leader Club, a nonprofit group that provides leadership development, mentorship and advocacy for middle schoolers from single-parent households, at the poverty level, and with poor attendance and academic records. Nwafor was raised by a single mom.

“Like most humanitarians, we just do it every day,” Nwafor said. “I get up and help every day.”

“If you look at the accomplishments of Ms. Koontz and the adversities that she suffered and what she was able to accomplish to bring us to where we are today and the past 30 years, we look actually to this person for the same thing,” Schaffer said.

Nwafor said she always wanted to help because someone helped her — a sixth-grade science teacher named Ms. Gregg.

Williams, principal at North Rowan High School, was credited by her nominator, Brian Whitson, for “relaunching the school as a restart school.”

“I just want you to know how deeply humble I am by this opportunity and recognition tonight,” Williams said. “This award brings honor not just to me but to the truly brave and dedicated staff of North Rowan High School.”

Dee Dee Wright, who presided over the ceremony, recognized Cannon, 17, who advocated for a skate park and worked with Salisbury Parks and Recreation. He gave a call to people at the ceremony to think about the youth of the community, saying if kids don’t have activities to keep them busy, they may end up in jail.

Cannon petitioned the City Council for construction of a skate park and was invited to be a guest lecturer at Winston-Salem State University to speak about using public comment to make an impact.

Salisbury Mayor Al Heggins spoke of the value of the legacy that Koontz left to the youth in the city.

“We’re just so pleased that this great work continues, and what an honor it is to have you following in her footsteps because she cared so much about people and about children,” Heggins said.

Koontz was one of the organizers of the city’s Human Relations Council in 1985. During her life, she became a national figure in education, civil rights and women’s rights.

In 1968, Koontz served as the first black president of the National Education Association. Less than a year later, President Richard Nixon appointed her director of the U.S. Labor Department’s Women’s Bureau, making her the highest-ranking woman in his administration.

Before the awards were handed out Thursday, the audience watched videos and heard from Dora Wood, who chairs the awards committee.

“We are here to recognize members of the Salisbury community for their honorary commitment to the humanity through service, and I’d like to leave with you a quote from Elizabeth Duncan Koontz. And she said, ‘Teaching is the mother profession; without teaching there would be no other professions,’” Randall said.

The Elizabeth Duncan Koontz Committee is a subcommittee of the Salisbury Human Relations Council.