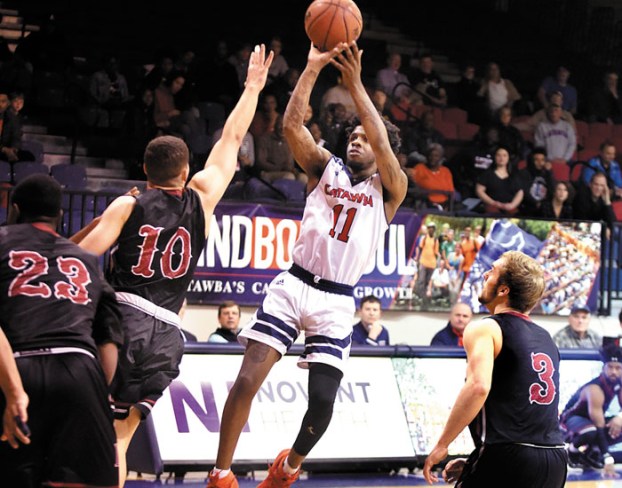 Catawba wins in overtime over Lenoir-Rhyne, 89-81

Catawba gets the home win in OT 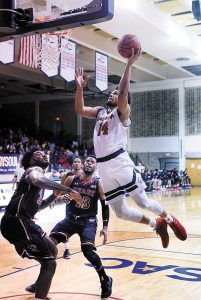 The Indians squandered a 20-point first-half lead and shot a dreadful 30 percent from the field in the second — then rode senior Jordan McElveen’s 15 overtime points to a declarative, 89-81 SAC victory over visiting Lenoir-Rhyne.

“It’s a really good feeling,” McElveen said, outside the boisterous Catawba locker room. “This game was big for seeding in the conference and the tournament. But yeah, we made it harder than it had to be.”

The victory snapped a two-game skid for third-place Catawba (20-7, 13-6) and assured the Indians a home game when the conference tournament kicks off next Wednesday. They reached 20 wins for the first time since the 2005-06 season.

“We’ve been knocking on that door for a while,” said coach Rob Perron. “But we’re really concerned about getting into the national tournament. That means winning as many games as possible.”

This was a game they had to win twice. Catawba shot a sizzling 63 percent from the field in the first half and took a 36-16 lead when lightning-bolt Marcell Haskett hit a pull-up jumper from inside the lane with 3:04 on the clock. His fade-away 3-pointer at the buzzer gave the hosts a 43-27 halftime advantage.

“We were real engaged in our defensive assignments and in finding open shots,” McElveen said, moments after 7-for-14 from the floor and scoring a career-high 27 points. “We were ready to come out and play.”

L-R (18-9, 11-8) was more than ready to counterpunch in the second half. The Bears opened with seven unanswered points, then got an individual 7-0 run by senior Djibril Diallo to close to within 47-43.

“We knew at some point they were going to put it together,” said Catawba’s Jameel Taylor. “They’re coach (Everick Sullivan) makes them play hard — and when they do that, they can be a different team.”

“I think we stopped attacking in the second half,” Perron said. “We were playing not-to-lose instead of to win.”

Taylor forced the overtime when he hit a pair of free throws 16 seconds later and then turned a game-saving steal into a breakaway jam with 1:02 left.

“It’s playing basketball,” he said, with a post-game shrug. “I read the defense and gambled on a steal. At that point, it was make a play or go home.”

There was only one player to watch in OT — McElveen. The 6-4 forward scored 13 straight Catawba points during a pivotal, 100-second span. Haskett’s 3-ball tied the score 73-73, just seconds before McElveen twisted down the lane for a layup that put the Indians ahead for good. He added a 3-pointer from the top of the key and converted all 10 of his free throw attempts.

“He was like Krispy Kreme,” said Taylor. “The ‘Hot-Now’ sign was turned on. A lot of people on this team can score 20 points in any game, but we all realized he had the hot hand. Everything was going good for him.”

“The point guards (Taylor and Devin Cooper) told me to stay aggressive and keep penetrating,” he explained. “They kept calling plays for me and putting the ball in my hands. All I had to do was stay confident.”

And by doing so, he opened the back door.

NOTES: McElveen’s previous career-best was the 26 points he scored as a sophomore for Davis & Elkins. He finished 12-for-12 from the free-throw line. … Haskett shot 6-for-11 from the floor and netted 19 points. … Catawba made 13 of 14 free throws in overtime. … The Indians held a 45-30 rebounding edge, led by Jeremy McLaughlin’s 12. … Catawba had 20 turnovers, including 12 after the first half. It closes its regular-season against Anderson Saturday afternoon at Goodman Gym.

By David Shaw sports@salisburypost.com SPENCER —Nobody knows how North Rowan’s post-season adventure will end, but it made quite an opening... read more