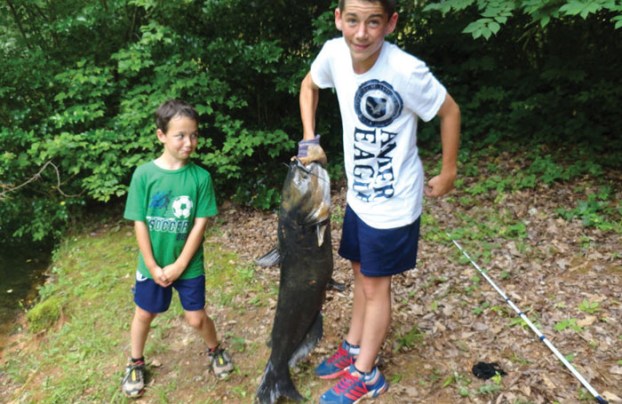 Submitted photo Ever since Hunter Faust was a kid, he has loved fishing,. Here he is with a friend and a big catch. Now the Catawba College student is learning to be an entrepreneur.

Catawba College junior Hunter Faust may seem to some to be an unlikely entrepreneur, but the student-athlete from Statesville is literally fishing to develop his big idea.

In fact, Faust has been pondering his business venture since childhood.

“When I was 12 years old, I was fishing with my dad in Virginia. I had hooked a really big bass and I was reeling it in, reeling it in, and then, all of a sudden, it just spit the hook out. It didn’t break my line or anything, and the hook was still intact,” Faust remembers.

“I went and sat on the bank on a rock in the sand, and with a stick, I drew the outline of the hook. And I drew a circle – sort of like the hook would close and set.”

It was in the entrepreneurship class that Faust took during the 2017-18 academic year that he began to once again more closely examine his idea for a “closing” fishing hook.

“Professor (Renee]) Just assigned a project to innovate something that already exists. My classmate and I chose my fishing hook idea for the class project. While presenting the project in class, Dr. Just had already emailed about running this idea through the Catawba (Center for Entrepreneurship and Experiential Development lab).”

During the first stage of developing his idea — the research and development stage — the 20-year-old Faust learned “that they make a whole lot more fishing hooks than I thought, but none like the one I’m working on.”

It was during this stage that mentor Wes Bray was assigned. He lent a hand in “brainstorming the hook’s name and in fixing a couple of preliminary design flaws.”

Faust made Biteloc a legal limited-liability company in North Carolina this past summer, but his first prototypes had “a lot of moving parts,” including a spring and a lever. For the springs, he admits to “stealing out of my mom’s work pens (sorry Mom!) to make my early prototypes.”

Bray pointed out to Faust “that if the hook was used in saltwater, those fish have teeth and getting it out of their mouths could pose a problem.”

Even his second prototype had a lot of moving parts, too many to be cost-effective to produce, and were problematic to get out of the mouth of a fish, and didn’t stand up to repeated use.

Last summer, Faust met with Eventys in Charlotte, a company that helps entrepreneurs get their ventures to market. Eventys is now in the process of developing a one-size or average-size hook for his prototype.

Faust shows several hooks he made himself over Christmas break at the MiXXer in Winston-Salem. MiXXer is a hands-on facility where entrepreneurs have access to tools — scrap metal, metal working machines, as well as a wood shop, 3D printing and machinery for the production of soft goods.

After Eventys completes his prototype, Faust says, “it’s up to me to test them, use them and make sure they work.”

He’ll work out the kinks, and then it’s on to crowdfunding to seek investors, and then, “taking it to market.”

“I really haven’t thought about the money aspect of it,” Faust says. “I just think it would be cool to walk around a store and see something that I invented. This process has made me realize that I want to own and manage my own company.”

Faust says the process of getting his venture launched has been both overwhelming and fulfilling.

“I’m not a business major or familiar with the business world, and a lot of the terms are new to me. However, this has shown me that I can learn quickly and that I have a pretty good work ethic.

“I don’t really like all of the attention because I’m reserved and do my own thing. I’m not a partier. I’d rather spend my time doing something.”

For Faust, that something could be anything from fishing from his canoe to hunting with his dad, or you might catch him on the soccer field. He is captain of Catawba’s soccer team, continuing to play the sport he has played since he was 3 years old.

After Catawba, he’s not sure where his path will take him. “I want to work outside and in nature – anything but behind a desk.”

Looking back on how far Faust has come with his venture, Just shared these thoughts: “The process of working with Hunter has been rewarding from a mentor’s point of view as he consistently takes feedback, processes the information, and works to improve his product and/or process. While Hunter considers himself an ‘unlikely entrepreneur,’ I was not surprised. Entrepreneurship is more about how individuals think, their mindset, and how they solve problems than it is business.”

By Emery P. Dalesio and Jonathan Drew Associated Press RALEIGH — The political operative at the center of an election... read more