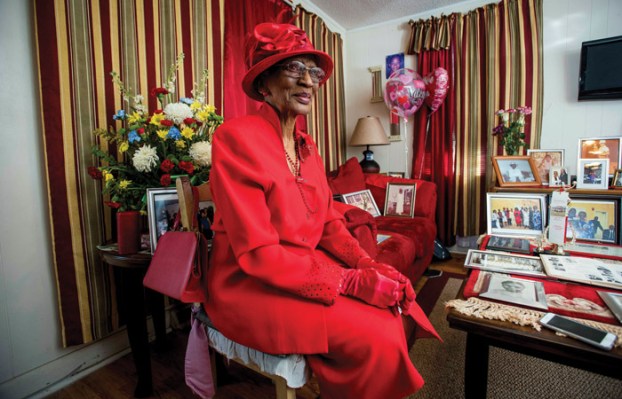 JON C. LAKEY / SALISBURY POST Magdalene Cathcart Fox graduated from J. C. Price High School in 1956 and has been a member at Southern City AME Zion Church for over 60 years. She is receiving the Leadership Award from the Church. Salisbury, North Carolina 2/14/19

SALISBURY — For over 60 years, Magdelene Fox has attended the local Southern City Tabernacle A.M.E. Zion Church as an unsung, spirited member. This year, the church tipped its hat to Fox, honoring her life with the “Legacy of a Leader: Black History Celebration award.”

The award recognizes Fox as an impactful, uplifting member not only of the church but also of the community, said Kim Kelsey, who has known Fox for around 25 years.

Having demonstrated a lifelong dedication to Southern City, Fox said she was president of the Spiritual Chorus Choir as well as a member of the Usher Board and Trustee Board. In 2014-15, she was voted layperson of the year.

But the list of awards doesn’t end there. Southern City also presented Fox with a senior ushering award in 1999.

Fox — a Rock Hill, S.C., native — was born May 16, 1936. She moved to Salisbury when she was 9 after her father’s death. Once in Salisbury, Fox attended Monroe Street School, followed by J.C. Price High School, where she would graduate in 1956.

While at Price, she was a participant of the school’s Glee Club, Student Council, Yearbook Committee and Future Business Leaders of America. She also played the xylophone in the school band.

In her senior year, Fox was voted friendliest female in school.

Fox was also a starting athlete for Price’s women’s basketball team. In June 2008, she was added to the Price High School Hall of Fame.

To this day, Fox is the unofficial cheerleader for Salisbury High School’s basketball team, saying “I just like to see them play.” She still attends almost every basketball game.

After finishing high school, she first started working for Rowan Hospital, which is now a member of Novant Health. She would stay there for two years.

She went on to work at Cone Mills. Working there for 30 years as a spinner, she would retire in 1997.

“I told (my parents), there was only three things I wanted when I was growing up: a home, a car and some high-heel shoes.”

She said, she was grateful to have gotten all of that and added “I have got to thank the Lord, praise the Lord.”

Outside the church, Fox’s commitment to the community did not end. Fox was member of the Rose Sharon Chapter 1 Order of the Eastern Star. There, she was a chaplain as well as an active member for more than 45 years.

Kelsey said she has known Fox as a member of the Rose of Sharon Order of the Eastern Star and that Fox is a big asset.

Fox is also an active member of the women’s club, Red Hatters, and a resident of the West End community.

Dee-Dee Wright, a long-time friend of Fox, said she is a wonderful, strong spirit who has been a strong member of the community for a long time.

Wright added Fox has received that award because of “what her leadership has done.” If you need something, Fox is there, Wright said.

More broadly, Kelsey said, Fox is the kind of person who brightens up your day.

Both Kim and Wright said Fox was well known in the community for singing “Tears,” an old gospel song.

True to their word, Fox sang the song for the Salisbury Post, noted that she has performed the song in the choice at Southern City and every church she’s attended.

Fox went on to speak to the Salisbury Post about Black History Month:

Post: When you think of Black History who inspires you and why?

Fox: “The one we marched for all the time, Martin Luther King Jr. … He’s a good soldier in the army and all, and I just give him the praise.”

Post: How do you personally live out Martin Luther King’s ideals?

Fox: “First thing, I pray and thank God for blessing us to see another day. … There are changes in the world, you know, and he brought us from a long way, and I marched in his parade.”

Post: What legacy do you hope to leave for future generations?

Editor’s note: This story has been updated to correctly state the title of a song for which Fox is well-known. The songs name is “Tears” and is an old gospel song.

Salisbury gathers to remember Patsy Reynolds, a ray of sunshine

By Susan Shinn Turner For the Salisbury Post Chance Reynolds has been a pilot for 20 years, and, no matter... read more