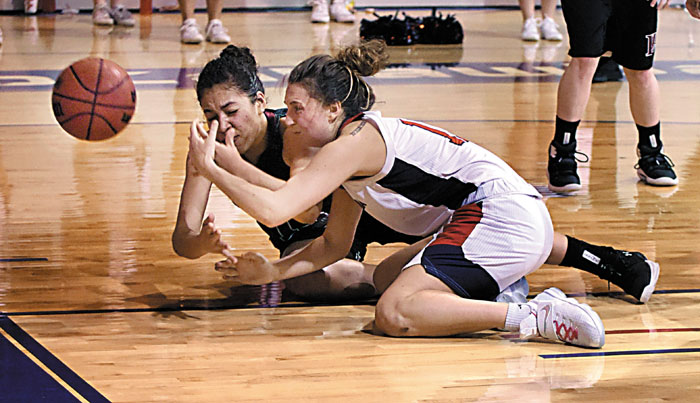 SALISBURY— Red-eyed, puffy-lipped Catawba Indians emerged from a quiet locker room one by one.

The scoreboard wasn’t visible from the lower level of Goodman Gym, but it was obvious it was a disappointing Wednesday night for Catawba’s women’s basketball team.

They were pummeled physically, mentally and emotionally by visiting Lenoir-Rhyne. The final score was 66-50.

It was a savage struggle for seventh place.

Now Catawba (13-13, 8-11)  is locked into the eighth spot in the South Atlantic Conference, and that’s not good news. Catawba plays league champ Anderson, one of the top teams in Division II, on Saturday’s Senior Day. Then the Indians will have to go to Anderson for the first round of the SAC tournament. Barring absolutely amazing events, it’s going to be a losing season.

It was a rough game with all the grace of a demolition derby. Catawba is a finesse squad, young and thin, reliant on speed, and the taller, more experienced Bears had their way. L-R seniors Kendall Toineeta, Ashley Rodriguez and Madi Suddreth combined for 39 points on a night when it was a chore to score.

“We played Saturday at Lincoln Memorial and it was whistle, whistle, whistle, and then tonight they just kind of let them play,” Catawba coach Terrence Baxter said. “A physical game is not the type of game we’re very good at right now. L-R has bigger people. They’re better suited for that style of play.”

Catawba was only called for 11 fouls in the contest, while L-R was whistled for 12. Catawba actually drew a lot more whistles on shots and got to the foul line 16 times, making 15 free throws. L-R shot only two free throws all night, but the Bears handled the blood and bruises and kept playing. By not losing their composure, the Bears (15-12, 10-9) were able to avenge a loss to the Indians on their  home floor on Jan. 23.

“That night they beat us in Hickory, I thought Catawba played a lot tougher than we did,” said L-R coach Cameron Sealey, an All-SAC standout for the Bears before graduating in 2012. “Look, it’s the end of February and everyone’s tired. So it comes down to toughness, and we were the tougher team tonight.”

The Bears had to show resilience early because Catawba jumped to an 8-0 lead on five quick points by Taisha DeShazo and a 3-pointer by Elizabeth Webb.

“We’ve had some sickness and had to change our starting lineup, and that was a factor in our slow start,” Sealey said. “Catawba started the game playing really fast.”

Nearly four minutes into the game, a layup by Madeline Hardy finally put the Bears on the board. They made it 8-all on a 3-pointer by Rodriguez. Then the teams scrapped on even terms for a while.

“We were playing hard,” Webb said. “But we just never could get everyone on the same page tonight. Nothing clicked.”

Catawba slid behind by 15 points on another Rodriguez 3-pointer midway through the third quarter, but then the Indians had their best minutes of the game, turning up the heat with frantic defensive pressure and creating mayhem. Madi Hallman made a 3-pointer. Shemya Stanback scored twice off turnovers. Webb found Hallman for a layup to cut the Bears’ lead to 43-37.

L-R went to the fourth quarter ahead 47-40, but Catawba didn’t appear to be in bad position.

Sophomore post player Talia Barnes had the best night of any of the Indians with 16 points and 16 rebounds, but she missed a contested layup in traffic to start the fourth quarter. That was a big possession.

“There were a couple of times that if they’d made a shot at the right time, momentum could have been completely different and the game changes,” Sealey said. “At the same time, I thought we made some very big shots, especially in the fourth quarter.”

After Barnes’ shot didn’t fall, Suddarth made a spinning jumper in the lane for the Bears. Toineeta got loose for back-to-back layups, one on an uncontested drive, another when she split two Indians to finish a one-person fast break after a steal. When fearless bomber Kennedy Weigt buried a 3-pointer with 5:46 left, the Bears led 60-44, and the frustrated, exhausted Indians were finished.

“We just couldn’t get the big stop,” Barnes said. “We had their lead down to seven and had a chance, but then they scored four of five times in a row — and scored easily. We went through a lot of defensive rotations, but we didn’t stop them.”

L-R shot 9-for-12 from the field in the fourth quarter.

Catawba posted some ugly numbers — 24 turnovers and only eight assists. And 28 percent shooting for the game. Only Stanback (4-for-7) had a good shooting night.

“We’ve searched for consistency all season,” Baxter said. “But our big players have been hit-and-miss.”

NOTES: The future is brighter than the present for the Indians, with a banner 2019 recruiting class that includes 2,500-point scorer Lyrik Thorne (Ledford) and 2,300-point scorer Janiya Downs (South Rowan) on the way. … Five of Catawba’s 12 fouls were whistled on Hallman, who fouled out late. … Catawba’s only senior, Webb, will be saluted on Saturday when the Indians play a nothing-to-lose game against Anderson at 2 p.m.