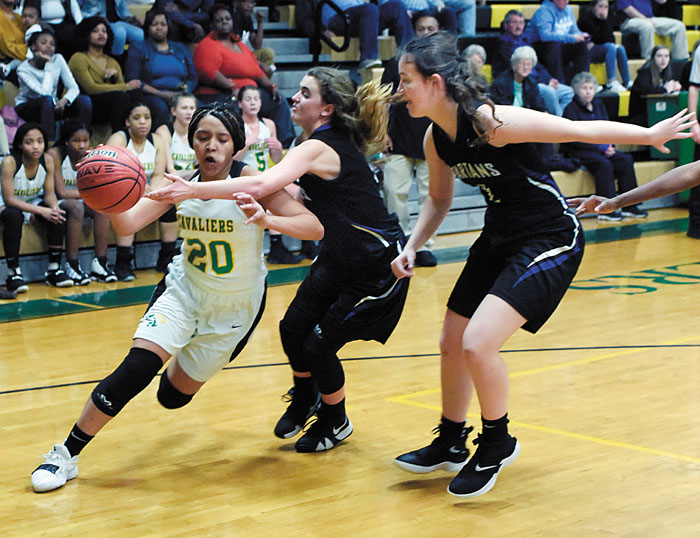 The 14th-seeded Cavaliers received a game-best 20 points from freshman Hannah Wilkerson and 14 more from sophomore Jamiya Daniels, but were pink-slipped out of the tournament by the Community School of Davidson.

“We missed a lot of opportunities,” coach Lamar Wilkerson said, after North suffered a 56-49, first-round loss. “And we let the game get out of hand. We got a little frustrated.”

The Cavs (16-12) fell behind early and never caught up against No. 19 CSD (16-11), which advanced to Thursday’s second round. The visitors used freshman Jillian Charlet’s 3-pointer at the buzzer to open a 14-10 lead after one quarter and stretched it to 31-24 by halftime.

“I don’t know if they were any better than we were,” said Hannah Wilkerson, the coach’s daughter. “But they moved the ball around well and made us lose their shooters. Our wing players weren’t rotating fast enough and that gave them open shots.”

CSD was paced by Lauren Whitley’s 17 points. The 5-foot-11 sophomore made a three-point play early in the final period that gave the Spartans a 44-34 edge. Then with 5:37 remaining in the fourth quarter, she pulled up for a short set shot inside the lane that provided 48-35 lead.

“She’s got a high motor and plays with a lot of intensity,” said winning coach Brian DeLay. “But her defense was a key. We had to focus on two players (Wilkerson and Natavia Taborn), and she really helped out.”

North inched as close as 54-48 when senior guard McKenzie Shoaf emerged from a scrum under the basket and hit a last-minute layup.

“I’m pleased with how we hung in there right until the end,” said Coach Wilkerson. “We tried to limit our turnovers and competed with them. We showed glimpses of playing a whole game, but for a team this young, playing in a playoff atmosphere, it was a wake-up call. It was a good lesson for us.”

Wilkerson, the 5-7 guard, produced a number of authoritative dribble-drives to the basket and scored most of her points on overpowering layups. “That’s just how I play,” she said afterward. “I have a good inside game.”

There were 40 personal fouls called, including 27 against CSD. North shot 23-for-35 from the free-throw line, but missed five in the fourth quarter.

“Is it tough to walk away from this? Yes and no,” Coach Wilkerson said. “We won 16 games. Win or lose, I told them I’m proud of them. They turned the program around.”

That did little to soften the sting his daughter felt.

“We came in happy,” she said. “We didn’t think our season would end tonight. Not like this.”