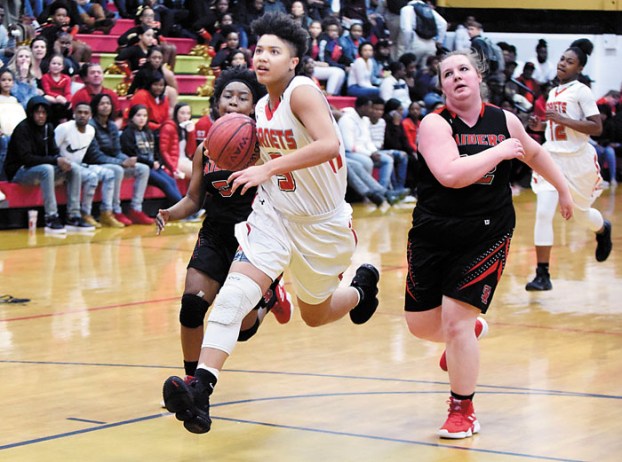 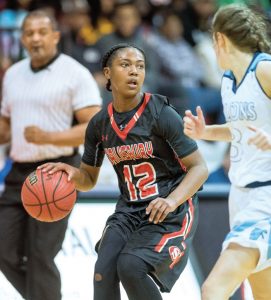 Salisbury’s Anayia Fulson (12), shown in an earlier game this season. Fulson and her teammates defeated Fred T. Foard in the first round of the state 2A playoffs, 71-27, on Tuesday night. The Hornets are the No. 2 seed in the 2A playoffs and will host Madison in the second round on Thursday. … JON C. LAKEY FILE PHOTO / SALISBURY POST

SALISBURY — For Salisbury girls basketball coach Lakai Brice, this was one of those playoff games that you dream about, but don’t really expect to see.

Salisbury’s reserves got to finish it off on Tuesday night, sprinting, dishing and finger-rolling, while the grinning starters stood and applauded every bucket.

Second-seeded Salisbury over-matched No. 31 seed Fred T. Foard on Tuesday in the first round of the 2A state playoffs. The running-clock final was 71-27.

“It was a big advantage for us playing at home,” Salisbury forward Tacorra Robinson said. “Everyone was comfortable. That helped us get off to a good start.”

Bryanna Troutman keyed that frenzied start with five quick buckets. Fred T. Foard nailed a couple of early 3-pointers, but then Salisbury (23-4) scored 12 straight points to take a 16-6 lead and never looked back.

“We’ve had some slow starts lately, but I think the girls understand that now it’s win or go home,” Brice said. “We played with a lot of energy. We had Jaleiah Gibson back from an ankle injury and she played strong inside. And Tacorra Robinson played really well. I tell her all the time she’s the heart and soul of this team.”

Robinson was a key varsity player for the Hornets as a freshman in 2015-16, but missed her entire sophomore season with a knee injury. She made a comeback as a junior. She’s missed quite a few games this season, but when she’s healthy and rebounding the way she can, it gives Troutman the freedom to leave the paint and roam all over the court. Robinson has quietly scored 350 career points, almost all of them on layups, stick-backs and free throws.

“My knee swelled up and I missed some games, but I’m fine now,” Robinson said. “The knee felt good tonight, and it was great to see everyone on the team play so well.”

Robinson scored inside to give the Hornets a 20-point lead in the second quarter.  Rachel McCullough splashed a 3-pointer as the Hornets expanded their lead to 40-15 at halftime.

The third quarter was a Salisbury highlight film, with McCullough and Chantal Robinson driving for three-point plays. Troutman scored at will against the smaller Tigers. Fulson swished a long 3-pointer and fired no-look passes to cutting teammates for crowd-pleasing layups. Salisbury outscored the visitors in the quarter, 22-2.

“Anayia made some wonderful passes tonight,” Brice said. “She’s made the decision to put her teammates first. She’s always looking to make that extra pass.”

Fulson’s scoring has slowed down a bit lately, but the junior continues to progress steadily toward 1,000 career points. She has 957.

Troutman played about half the game but still accounted for 18 points, nine rebounds and four steals. She got in some foul trouble and will have to avoid whistle issues when the Hornets face tougher opponents in the games ahead.

McCullough scored 11. She’s such a good shooter, it’s always a shock when she misses a free throw, but she missed a few. Gibson is very powerful physically for a freshman but also has soft hands. She yanked down seven rebounds.

All in all, it was a great night for the Hornets, a confidence-builder for the tougher games ahead.

“We picked up our intensity tonight,” Tacorra Robinson said. “Now we have to keep it going.”