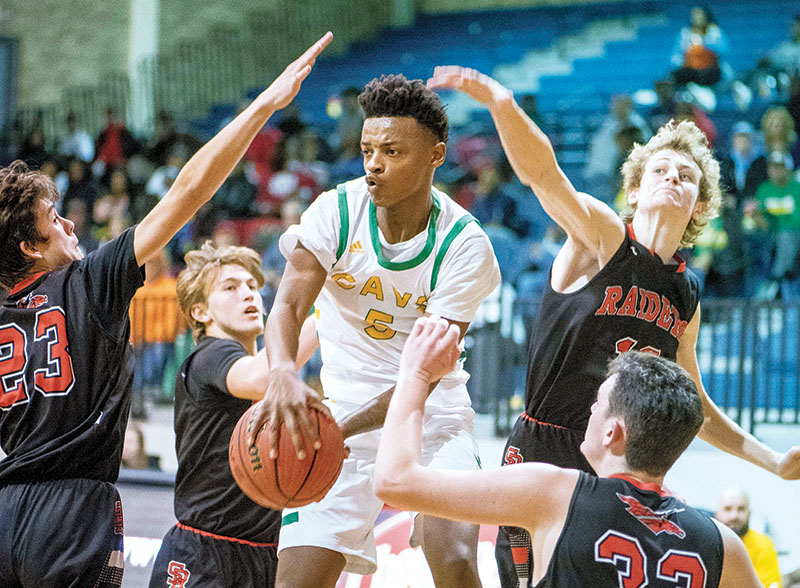 JON C. LAKEY / SALISBURY POST file photo North’s Derrick Page is guarded by South defenders during the first round of the Sam Moir Christmas Classic at Catawba College on Dec. 27, 2018.

Even in Mount Gilead, at the foot of the Uwharrie Mountains, home of West Montgomery High School.

North Rowan boys basketball coach Jason Causby says that’s where his team’s season turned around on the night of Jan. 4.

North Rowan had not experienced a merry post-Christmas. An ugly loss to Salisbury, the Cavaliers’ biggest rival, in a semifinal game in the Dale’s Sporting Goods Sam Moir Christmas Classic had been followed by an uglier loss to North Stanly in the third-place game. The Cavaliers had crumbled like a sand castle and scored a pitiful 15 points in the second half against the Comets.

“There was a rough four of five days for us,” Causby said. “And then our first game back after the Christmas tournament, we make the trip to West Montgomery, we’re struggling and they come out inspired. They’re making 3-pointers from everywhere.”

North went down seven, and then nine, and then 11. North didn’t lack energy, but it was misplaced energy.

North regrouped at halftime. Senior Brevin Goodlett would score 29 points, establishing himself as the county’s most prolific scorer. Senior Dayjuwon Cooke took over the boards in the second half. Kendrell Goodes, a sophomore shot-blocker, made a key 3-pointer. The Cavaliers rallied to win, 65-57.

“We made a nice comeback in a tough gym to play in,” Causby said. “Huge game. We hadn’t been playing very well, and if we lose that one, it’s probably going to lead to two or three more losses.”

That comeback at West Montgomery was the start of a North Rowan winning streak that has now reached 17 games. The night after winning at West Montgomery, North returned to Catawba and crushed Salisbury, 69-38, with scary efficiency on both ends of the floor. Things took off for the guys in green and gold from there.

Seeded third in the 1A West bracket, North (24-2) has won the easy games and the tough games, including one-point decisions over rugged Yadkin Valley Conference foes North Stanly and South Stanly to take the conference tournament. The Cavaliers went 16-0 in the YVC in the regular season.

“We won a critical one at South Stanly very early,” Causby said. “That’s a gym that our guys lost in last year.”

As a young coach, Causby led terrific Salisbury teams, including the 2008 squad that reeled off 28 straight victories. That team lost in a sectional final to Starmount after leading scorer Brandon Abel injured an ankle.

“I’ve learned that you’ve got to be lucky as well as good in the state playoffs,” Causby said. “You’ve got to stay injury free. I’ve also learned to appreciate the highs and enjoy the moments a little more than I did earlier in my coaching career.”

Causby coached at Charlotte’s Mallard Creek High last season and picked up some things from competing in a 4A environment.  One thing he brought with him to North from Mallard Creek was “Weight Room Wednesday.” The Cavaliers have partnered up and hit the weights all season long during those mid-week sessions.

“We’ve tried to keep it light and fun, but it’s also competitive,” Causby said. “Guys have embraced it, and I have no doubt that it’s really helped us stay strong and fast all season.”

When Causby was hired in June, he walked into an unusual situation. North had lots of talent, mostly senior talent, but it was also talent that had been through adversity. The Cavaliers had a mid-season coaching change in 2017-18, finished 18-9 and lost in the second round of the 1A playoffs.

“We have a lot of talented players, although talented players don’t necessarily equate to wins,” Causby said. “What makes this group of guys special is they’ve played together a long time and they’ve been through some tough times together. They’re hungry. They’ve all got something to prove. They were worried their careers might end before they had a chance to make a run at anything big.”

The chance appears to be there this season.

Goodlett has added a smooth 3-point stroke to his game as a senior and is hitting from long distance at almost 40 percent. That’s made him practically unguardable. He’s scoring 19 per game.

Cooke, who joined Goodlett as a 1,000-point career scorer in the YVC tournament, is the ultimate slasher/rebounder. He’s been virtually automatic (almost 74 percent) on 2-point attempts and scores 17 per game.

Derrick Page, another senior, is the point guard, the floor leader who orchestrates North’s offense and defense.

“That’s just what comes natural for me,” Page said. “I know I can score if the team needs me to score, but being that guy who will pass first has been my role on every team I’ve ever played on. I try to bring out the best in my teammates. We’re all brothers at heart.”

Page’s offensive strength is the old-school mid-range game. He’s good on the pull-up in the lane.

He thought he had a lousy game against South Stanly in the YVC tournament final, but that was before Causby showed him the stat sheet.

“My shots weren’t falling, but Coach pointed out I had seven rebounds, seven steals and four assists,” Page said. “I helped get the win.”

Goodlett, Cooke and Page are all unsigned, but they all are fully qualified academically and will play college ball somewhere next year. Causby says he’s getting more calls about them now, and the state playoffs should provide additional exposure.

Goodes is the future of the Cavaliers. He came up big in the YVC tourney championship game with 15 points.

North benefits from some outstanding athletes from the football team who have accepted workman-like roles on the basketball squad. Malcolm Wilson, Quintous Smith Jr. and Zay Davis were all first-team all-county football players.

Wilson, a running back who was Rowan County Offensive Player of the Year,  can bring defensive quickness and strength off the bench.

“Our depth has really made a difference,” Causby said. “Our practices are very competitive. There were times, during the softer part of our schedule, that our toughest competition was ourselves, but those practices really helped us improve as a basketball team. We’ve got a young kid (6-foot-8 freshman Brandon White) who does unbelievable things in practice.”

Smith, who caught TD passes as a wideout in the fall, does a lot of the thankless dirty work. He’s a muscular defender. He’s second on the team in assists, third in rebounds, and usually chips in with a half-dozen points.

“This is a special team because of the bond we have on the court and off,” Smith said. “The chemistry has always been there with us, whether it’s AAU ball, high school ball or pick-up ball. We play the roles we need to play to be successful.”

Smith, Page and Causby all pointed at work ethic as a key to this team’s success. Talent plus work ethic leads to trophies and championships.

“All of these have tried hard to play the game the right way,” Causby said. “I’m proud of them for that. None of them have worried about scoring averages or individual accolades. They’ve put the team ahead of themselves. We haven’t had a time this year when someone did something good on the court, and everyone on the bench wasn’t happy for him. They’ve celebrated each other’s successes.”

Causby has a long row of assistants. He says they’ve all contributed. He’s especially thankful to have Bill Kesler on board. Kesler, a fixture at North for decades, guided the team for the last 11 games last season and went 9-2.

“Bill has not only been at North Rowan a long time, he’s been with this group of kids a long time,” Causby said. “He’s been a huge part of this. The assistants have made me look better than I am.”

North has looked very good since that January night at West Montgomery.

North starts what it hopes will be major playoff run tonight at home at 7:30 p.m. against Carolina International School from Concord. North’s girls, also YVC tourney champs, will play the first game of a doubleheader at 6 p.m. Admission is $8.

Causby believes the Cavaliers, who have been working since July for this, are good enough to go 6-0 the rest of the way to win it all.

But 1A is a mine field with stacked prep schools, charter schools and academies all over the place. The Cavaliers will have to be good — and lucky – to get it done.

“We’re excited,” Smith said. “Who wouldn’t be excited about the playoffs? We all believe we’ve got a run in us.”