Cooper pitches school bonds, Medicaid in State of the State 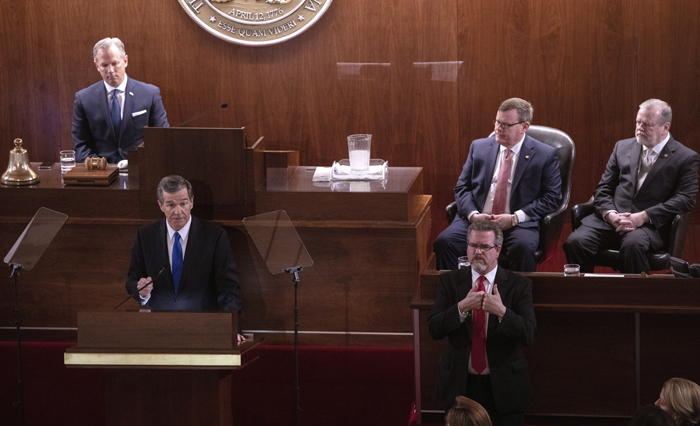 House Speaker Tim Moore address to a joint session of the General Assembly in Raleigh on Monday. Travis Long/The News & Observer via AP

During his second biennial State of the State address, Cooper made a soft sell for his favored — but not always universally supported — initiatives to a joint session of the General Assembly. The legislature is still in Republican hands, but Democrats won 16 additional seats in November, taking away veto-proof control the GOP held during the first two years of Cooper’s term, which was marked by acrimony and litigation.

“The people of North Carolina are determined for us to work together. They have spoken. They want a more balanced approach to government,” Cooper said to a statewide television audience.

While Cooper and Democratic legislators have more negotiating power, the governor declined to use a figurative stick on the Republicans to get his points across during his nearly 40-minute speech in the House chamber.

On Medicaid, Democrats have for years sought to expand its rolls to cover hundreds of thousands of low- and middle-class residents, arguing it will bring tens of thousands of jobs, help rural hospitals and save lives.

“Are we willing to help them? It’s time,” Cooper said in a phrase he repeated several times during what was likely his strongest pitch of the evening. But he acknowledged the second thoughts of Republicans: “Guys, I know we can do this and I know some of you have some concerns. But let’s listen to each other and let’s get this done in a North Carolina way.”

As expected, he also urged lawmakers to agree to put a public school construction bond on the statewide ballot, saying roughly 40 percent of the public schools are at least 50 years old. He and Republican House Speaker Tim Moore have created an unusual alliance in support of a K-12 debt referendum. Senate Republicans have approved an alternate plan without debt.

A bond package “gets hammers swinging all across our state and still leaves money for good teachers and principals,” Cooper said. Although he didn’t provide teacher pay details — leaving it to his upcoming budget — Cooper has previously proposed to raise pay to the national average by the early 2020s. Republicans have pointed out that they’ve raised teacher pay, in some form, five years in a row.

Senate leader Phil Berger gave the Republican response on TV. With Cooper seeking re-election in 2020 and GOP Lt. Gov. Dan Forest, who sat behind him on the House dais and is a potential gubernatorial rival next year, the political environment is likely to turn more noxious as the two-year session continues.

While Berger emphasized that voters still kept Republicans in power in the legislative branch because they support “conservative principles of low taxes, reasonable spending and common-sense regulations,” he acknowledged the new dynamics.

“Republicans are going to have to work across the aisle, but so are Democrats,” Berger said.

Berger also criticized Democrats and Cooper for recent developments in the courts he considers partisan. On Friday, a Democratic trial judge voided a constitutional amendment approved by voters in November requiring photo identification to vote. And Cooper picked a Democrat on the state Supreme Court to become the next chief justice, passing over the longest-serving justice, a Republican.

Rather than unveiling programs or proposals, Cooper preferred to hit on previous ideas, including his proposal to create tuition-free community college, fight drilling off the North Carolina coast and rejuvenate small towns. While some got applause from Democratic legislators only, others, like expanding rural broadband access, received bipartisan clapping.

He also mentioned his executive order seeking to reduce greenhouse gases and praised lawmakers in 2017 for taking the state’s “bathroom bill’ off the books. He said more anti-discrimination efforts are needed.

Cooper also praised legislators for the recovery legislation approved after Florence, which caused well over $10 billion in damage and killed dozens of residents. He also highlighted heroism, pointing in the gallery to Trooper Nicholas Stoneroad, who kept working even when his own home was felled by trees and flooded, destroying almost everything he owned.

“I’m proud to report that the state of our state is determined,” Cooper said.