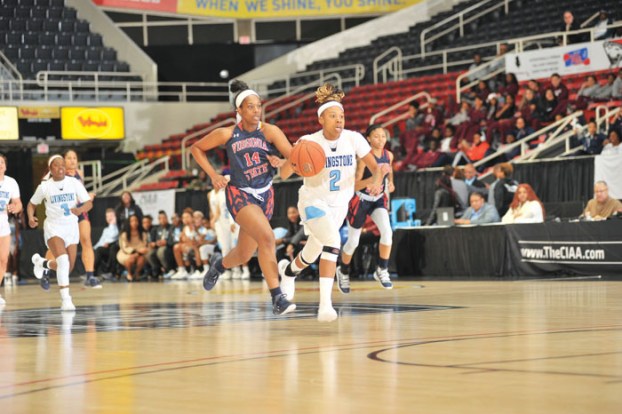 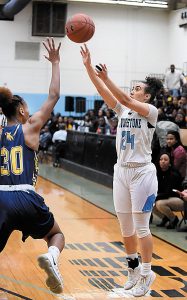 CHARLOTTE — Livingstone led whistle to buzzer and built a 27-point lead, but Tuesday afternoon’s CIAA Women’s Basketball Tournament win over Virginia State was anything but easy.

The Blue Bears hung on at the end, winning 67-63 at Bojangles Coliseum, advancing to today’s quarterfinals against Virginia Union at 4:30.

Livingstone, now 10-19 overall, the No. 4 seed from the conference’s Southern Division, got past the Northern Division’s fifth-seed on Tuesday. Today, Coach Tiffany Silver’s team takes on the top seed from the North, fresh off a first-round bye. The Panthers are 24-2.

The Blue Bears, 7-4 in their last 11 games, came out smokin’ hot on Tuesday, making nearly every 3-pointer they launched early on. They jumped out to leads of leads of 9-1, 14-3 and 25-9 in the first quarter behind guards Daisa Harris (16 points) and Darra Walker (six points).

When guard Adel Allen nailed a 3-pointer early in the second quarter, Livingstone had made 7-of-10 from the arc. Walker then dropped in her third from long range and LC owned a 31-12 advantage.

“It was a quick, exciting start,” said Silver. “The shots were there … we took the shots that were there and we were able to knock them down.”

The 11-0 Livingstone run was finally halted when Chrisanna Green hit a jumper at the 5:11-mark of the second period.

The bad news? Livingstone would score only one point (a free throw from Harris) during the last five minutes of the half. The Trojans closed the half on a 14-1 run, closing the gap to 40-26 at the break.

VSU cut into the deficit by five points during the third period, making it 52-43, heading into the final frame.

Livingstone pushed its lead to 15 points on another 3-pointer from Walker with 6:26 remaining, but again, the Trojans didn’t quit.

From that point, VSU outscored the Blue Bears, 20-9.

“Clearly, down the stretch, we needed that cushion that we had built,” said Silver. “There was definitely no sense of panic, but we stopped taking or going after the shots that were there early — and we got a little careless on some possessions, so we called time out, so Daisa could get a hold of the offense again.

“Virginia State is too good of a team not to take advantage of our mistakes and get back into the game,” continued Silver.

The Trojans closed to within three points at 66-63, with 16 seconds remaining. The outcome wasn’t secured until Yazmen Hannah’s potential game-tying 3-pointer missed with six ticks of the clock left, and LC’s Allen grabbed the rebound.

Allen was immediately fouled and made 1-of-2 free throws at the :03-mark, for the final margin.

“The difference was defense, which we’ve been focusing on in recent weeks, trying to get better,” added Silver. “We wanted to try to contain Green some and she still had an awesome game, but as a team, they had just 63 points.”

For Livingstone, in that first meeting against the Trojans, Harris scored 30 points and Walker had 19. In Tuesday’s victory, the duo did most of the damage again — Harris with 25 and Walker with 18. Allen followed with 13 points.

Harris had a monster game: In addition to the 25 points, the junior guard contributed 15 rebounds, seven assists and five steals — and just two turnovers while playing the entire 40 minutes.

Silver also applauded the work of freshman 6-foot post Karemee Copeland, although she did not score a point.

“Copeland had a good presence and always plays with a lot of energy when she’s on the floor,” said Silver. “She does a lot of talking on defense and does a lot of things for our team that doesn’t show up on the stats page.”

“Every night in the CIAA is tough and facing Union just makes it tougher,” said Silver. “They’re a little different from when we played them two months ago, but we are way different. Again, we’re just going to focus on us and do what we do …  and try to be the best version of ourselves that we can be.”