Bike tour draws crowd to ‘Pedal Thru the Past’

SALISBURY — More than two dozen cyclists pedaled through the streets Sunday as part of a tour educating participants about black history in the city.

The Pedal Factory already hosts Sunday social rides and had tossed around the idea of a history-focused bike ride, said the Pedal Factory’s Mary Rosser. Because it is Black History Month and important parts of the city’s history, particularly black history, are not widely known, Sunday’s ride was a natural fit, Rosser said.

At the bicycle tour’s first stop — Rowan Museum — Director Aaron Kepley spoke about the lynchings of Nease Gillespie, John Gillespie and Jack Dillingham — who were charged in the murders of the Lyerly family in west Rowan’s Barber Junction community. The trio were dragged from the county jail by an angry white mob and taken to what is now North Long Street before being tortured, lynched and shot.

In January, the Salisbury City Council unanimously passed a resolution condemning the lynchings as well as calling for the start of a process of racial reconciliation.

On Sunday, Kepley described how the mob overpowered guards — rumored to have been given blank bullets — and entered the jail to pull out the three men. 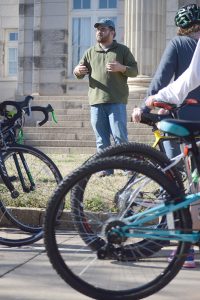 Josh Bergeron / Salisbury Post – Aaron Kepley, of Rowan Museum, speaks to more than two dozen riders who participated in Pedal Factory’s “Pedal Through the Past” event on Sunday in which cyclists drove to different sites to learn about the history of African-Americans in Salisbury

The next stop was North Long Street, where the Gillespies and Dillingham are thought to have be lynched.

Another site on the tour, Clyde’s house, is significant because it was previously owned by William Valentine — a free man of color who was a barber before the Civil War. Clyde said Valentine owned the house until the Civil War, but it’s unclear what happened to the man after that.

Lash and his family were owners of a chain of small grocery stores. He was a charter member of Salisbury’s Negro Civic League and was a constant proponent of voter registration. In 1929, at the age of 21 and with the help of a professor at Livingstone College, Lash registered to vote, a process for black Americans that involved reading a portion of the U.S. Constitution and interpreting it to the satisfaction of the registrar, according to files from Rowan Public Library’s Edith M. Clark History Room.

Lash, the son of Wiley Hezekiah Lash and Mayzonetta “Mary” Grundy Lash, was born in 1908 and died in 1995 of complications from surgery.

Speaking before riders in the Pedal Factory’s tour set out, Mayor Al Heggins said she hoped that participants would take some time to learn about one another’s personal history as they learned about Salisbury’s history.

Ask Us: What’s being built on Jake Alexander Boulevard West?

A parcel of land between Dunkin’ Donuts and and a Speedway gas station on Jake Alexander Boulevard will be the... read more