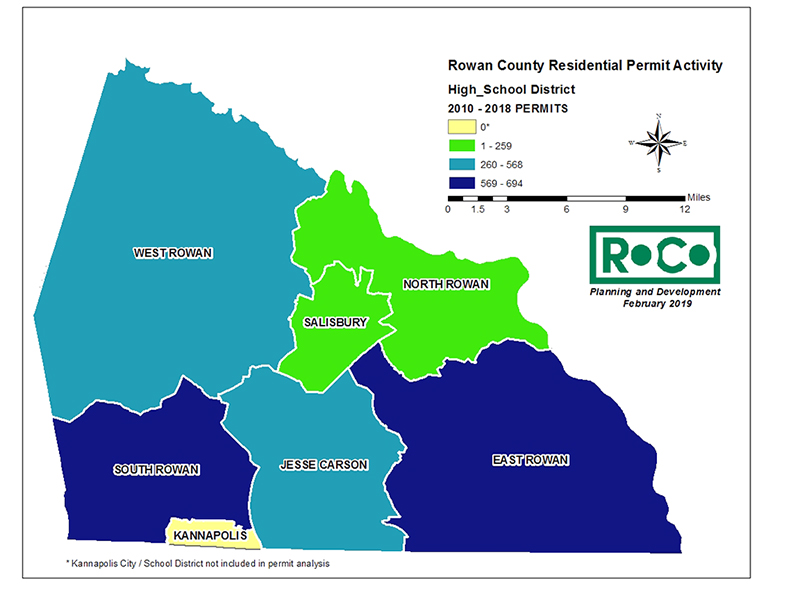 SALISBURY — In what’s scheduled to be a jam-packed meeting, the Rowan-Salisbury School Board on Monday will receive a presentation showing residential growth trends by school attendance zones and discuss consolidation and redistricting.

Compiled by the Rowan County Planning Department, maps in the presentation show residential permit activity by high school, middle school and elementary school districts. The data are a total of residential permits and do not necessarily mean the homes in question have school-aged children living in them.

Kannapolis City Schools are excluded from the presentation to be given Monday.

A memo to Chairman Josh Wagner and school board members states the presentation was requested by Superintendent Lynn Moody. During the school board’s meeting at 1 p.m. in Wallace Educational Forum at 500 N. Main St., Planning Department staff will provide observations on residential growth trends from 2010 to 2018 in comparison to school enrollment and perspective on anticipated commercial and industrial growth.

Among Rowan-Salisbury’s many elementary schools, Millbridge, with 266, saw the largest number of residential permits issued from 2010 to 2018. Close behind were Granite Quarry and Landis, with 258 and 266 permits issued, respectively.

Isenberg Elementary is the only district in which an overwhelming majority of the permits issued from 2010 to 2018 came in a single year. That occurred in 2011, when 56 residential permits were approved.

• The school board will receive a presentation about renovating Koontz Elementary School and turning into a CTE and Early College school.

The plan to be presented Monday will propose a new metal building be added to Koontz that contains a number of the career-specific classrooms, according to Monday’s agenda. The school would also budget for approximately 750 students.

The total construction cost is estimated at $9.09 million.

Career and Technical Education Director Mandy Mills and Assistant Superintendent for Operations Anthony Vann are scheduled to give the Koontz presentation.

• Following the Mills’ and Vann’s presentation, the school board is scheduled to enter closed session to discuss an unspecified personnel matter.

• The school board will hear a presentation about HVAC systems in need of repair or replacement across the district and consider selecting Moseley Architects for mechanical engineering design work.

The total cost of the work is estimated to be $8.02 million.

• The school board is also set to learn about two proposals to renovate Knox Middle School.

One would simple involve renovating the school as a middle school. Another, more expensive proposal is to turn Knox Middle School into a K-8 facility.

• The school board will consider a policy amendment relating to student assignment.