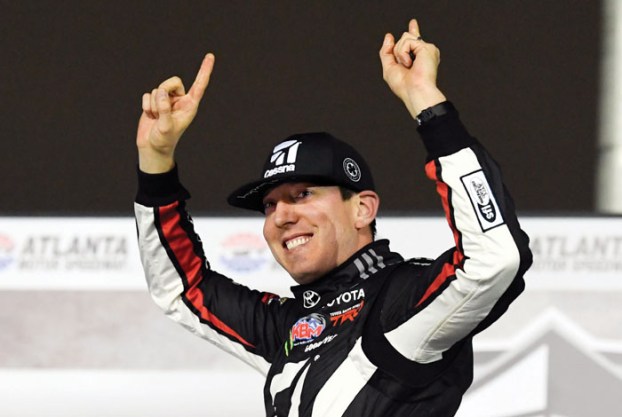 The first 16 victories came in trucks fielded by Billy Ballew before Busch founded his own Kyle Busch Motorsports team. With Ballew in attendance at Atlanta, Busch’s Tundra carried the former owner’s name.

“I had Billy Ballew on board with us here today,” Busch said. “And Billy’s right over here as well. It took putting Billy Ballew back on my truck to get me a win here, so we might have to make that an annual reoccurrence.”

Busch took Stage 1 and had an unscheduled stop shortly thereafter, but went from 24th to first to claim the second stage and went on for his fifth series win at Atlanta — and first since 2009.

There was a red flag with 13 laps to go after a multi-truck crash on the front stretch. The trucks were under caution until the race was delayed for weather and restarted with five laps left. Busch was never challenged after that in a race he led 92 of the 130 laps.

It was the first victory for the Supra that Toyota is using this season in NASCAR’s second-tier series.

“First Supra win in the Xfinity Series, so that means a lot for me to be able to win the first one,” Bell said.

Bell, who won a series-high seven races last season, gave up the lead during scheduled pit stops but cycled back to the front with 30 laps remaining. As dominant as he appeared, Bell didn’t believe he had the race locked up until a caution with eight laps to go gave him the chance to get fresh tires to preserve the victory.

Cole Custer made a late final charge, but Bell worked Atlanta’s abrasive racing lines over a three-lap sprint to the finish to win his first race of the season.

“I felt pretty sloppy there as a driver at times. We struggled on the longer runs,” Bell said. “I was tickled when that caution came out so I could go get some tires.”

The caution for John Hunter Nemechek’s spin with eight laps remaining gave Custer a shot to catch Bell. Although Bell beat Custer by .191 seconds, Custer felt that Bell would not have won had he not changed his racing line to hold off Custer’s charge.

“If he ran on the bottom, I think I would have had him,” Custer said. “It was close, man, but it just wasn’t enough.”

Justin Allgaier finished third and was followed by Brandon Jones and Tyler Reddick.

Jeffrey Earnhardt, grandson of the late Dale Earnhardt, was sixth for his first career top-10 finish. He has a partial deal with Joe Gibbs Racing — Bell’s team — and believes competitive cars will give Earnhardt a chance to win races this season.

“I was looking forward to maybe winning this thing,” said Earnhardt, who restarted second next to Bell on the final restart but didn’t get a good jump and faded.  “We showed we belong here and can run up front in these races.”

Mist and fog canceled qualifying, so the starting lineup was set by points and Custer was awarded the pole. But Bell got past him on the first lap and no one caught him for the entire first segment.

A clean pit stop put Bell back out front for the start of the second stage and he led all but one lap as his Toyota commanded the early part of the race.

Bell finally slipped at the final stage break and came off pit road in third, behind Jones and Reddick. But Jones was penalized for speeding and Bell moved up to second on the restart. Jones had to drop to 18th as part of the penalty.

The race marked the Fox Sports broadcasting debut for seven-time NASCAR champion Jimmie Johnson, who joined fellow driver Kevin Harvick in the booth as analysts. Harvick has worked select Xfinity Series races for the network for several years, but Johnson is new to medium.