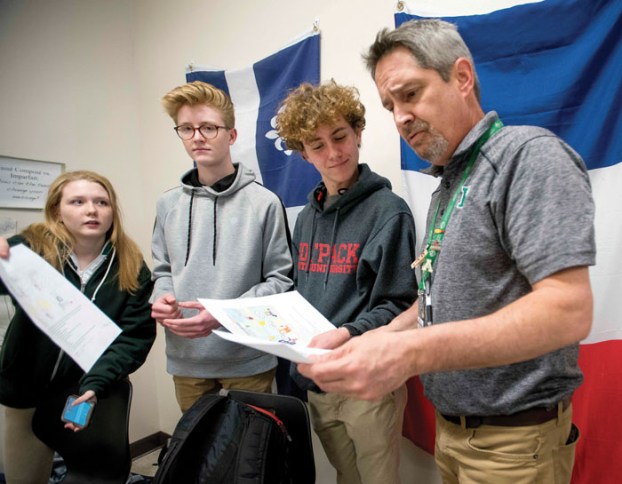 For Brown High School principal, now is the time to step back

KANNAPOLIS — When Todd Parker was a student at South Rowan High School, he couldn’t understand what made A.L. Brown High School so special.

But after being with Kannapolis City Schools since 1995 and principal of Brown for the past four years, he knows.

“When I finished school,” Parker says, “this was the district that gave me a chance. The students are honest, true, loving, caring and real.”

It’s been a privilege for him to lead the district’s flagship school, he says. As former principal at Wilson Elementary and Kannapolis Intermediate schools, he’s known the current kids at Brown since they were in prekindergarten.

That includes his daughter, Grace, a sophomore at Brown. His son, Jack, graduated in 2018 and is now with the Army, stationed at Fort Bragg.

Parker’s wife, Annie, is wrapping up a doctorate in educational leadership.

Now is the time, he says, to step back and simply be a parent and husband.

“I have been a principal for 15 years. I’m ready to slow down and support my family as I have every family in this community,” he says.

Parker will leave Brown at the end of this school year. The decision to leave wasn’t easy.

“Once you get established and once you’re able to help people, it’s just really hard to leave,” he says. “This is my life.”

His teachers are committed and dedicated, he says.

After Cannon Mills closed in 2003, Parker saw the number of free and reduced-price lunches increase in the district — to the point that all students in the system receive free breakfast and lunch.

“When I look at our diversity, it’s extremely diverse,” he says. “We are trying to be as inclusive as we possibly can. It’s important for our students to be welcomed and valued. Some of our kids don’t have homes to go home to. We have families living in cars. I have children having children. I have bought groceries and taken to homes.

“There really isn’t much of a middle class here anymore, and you can’t learn without those basic needs being met.”

Parker’s leadership team includes three assistant principals. Technology has freed them from being in their offices all day. They’re just as likely to meet in the middle of a main hallway as they are in the teachers’ lounge, says Alex Elliott, who with Cynthia Mills and Garrett Cooperman are Brown’s assistant principals.

Parker would much rather spend time in the classrooms, he says, observing, working with kids, being proactive about situations that may arise during the course of the school day.

“I’m very visible,” he says. “The kids know who I am, I can guarantee you that.”

Parker says his leadership style is hands-on, and his teachers think he probably has too many meetings.

“But I don’t know how you do this job unless you touch base often.”

Brown has always been a strong school when it comes to athletics, and with the busy spring sports schedule, a member of the leadership team is always on campus.

“We divvy up all the after-school events, but basketball is the hard one,” Parker says. “Two to three days a week, we’ll be here 7 a.m. to 10 p.m. Athletics take so much time, but it’s one of the things I love most. I love seeing the kids compete, but it will wear you out.”

Parker turned 50 this year, and he acknowledges being a principal is a young person’s profession. He’d like to see one of his assistant principals advance.

“I feel like I’ve raised other people’s kids,” he says. “I feel like I have a lot left to give, but I don’t need to be the main person.”

He’s ready now to more fully support his wife in what she’ll do next.

“We were Rowan County people,” Annie Parker says. “We never thought our blood would turn green.”

Kelly green and white are the Brown High colors.

She says her husband’s decision to leave was a family decision.

“We started talking about opportunities in the fall and just slowing down a bit. He is an amazing husband and father, but he is so dedicated to the kids at Brown. I know I’m a little biased, but the man has such a servant heart.”

Annie Parker says that she doesn’t see her husband walking away from education, but being a principal today is a 24/7 job.

“I commend any principal today at any level. … It’s a rewarding and fulfilling honor to serve students, but it is taxing,” she says. “Todd has agonized about this. … We’ll navigate it together.”

Annie Parker says she and her husband love to spend time outdoors at their family farm, read, work puzzles, and just get in the car and go to What-a-Burger or Gary’s BBQ to sit and talk. They’re looking forward to traveling more and visiting their son at Fort Bragg.

“We don’t mind what we’re doing, as long as we’re together.”

Assistant Principal Elliott, who graduated from Brown in 1999, has known Parker since he was her student counselor adviser.

“It’s hard in leadership to find people as loyal as he has been to the community and the schools in a single school district,” Elliott says. “He is very passionate about the student population he works with. For some of these kids, he’s worked with them at three different schools. He understands the development of the kids and where they’ve come from.”

Scott Rodgers is Brown’s dean of students and has been at the school for 28 years. Parker and Rodgers taught together at one time.

“He’s one of the best educators I’ve been around,” Rodgers says. “He cares about the whole school.”

Parker wants to make sure students are making good grades, but also that they’ve had breakfast each morning, Rodgers says.

“He loves these kids so much. He has great relationships with parents, too. Half the people in Kannapolis probably have his cellphone number.”

Assistant Principal Mills has been at Brown since summer 2017.

When teachers and subs were out recently because of the flu, Parker stepped into classrooms and taught, Mills says. If something needs cleaning up, he doesn’t get on his walkie-talkie, she says. He cleans it up himself.

“That all speaks to his character and his integrity,” she says.

Parker and his family are members of Midway Methodist Church.

He says he’d like to return to the classroom in a nearby school system.

“I am not leaving this community,” he says. “I have no anticipation of being too far away.”

By Liz Moomey liz.moomey@salisburypost.com SALISBURY — To give people with disabilities an opportunity to earn a paycheck, Annette Parker opened... read more