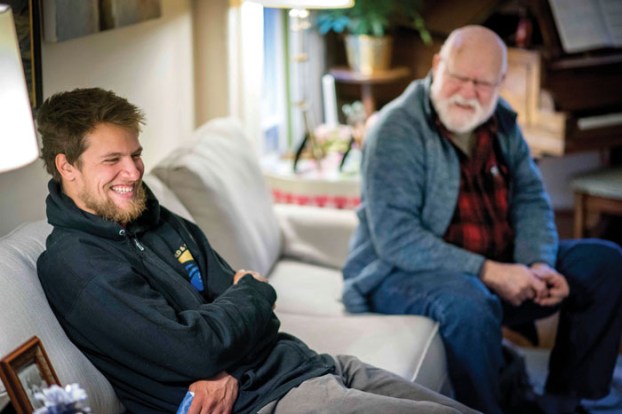 Jim Taylor and his son Khalil Taylor have been working on building a Greenland kayak in the garage for the last several months. JON C. LAKEY / SALISBURY POST

Dad and son build a kayak: ‘I’ve learned some things about working with my dad’

The bones of the kayak span the garage; the easternmost end extends beyond, into an annex created by 2x4s and a tarp. Symmetrical ribs run down the length, and parts with names like “chines,” “thwarts” and “combing.”

The builders are father and son, Jim and Khalil (pronounced “Ka-LEEL”) Taylor. Khalil answers the door with his thumb wrapped in a napkin and blue painter’s tape. “I just nicked it,” he smiles. “It was a pretty clean chisel.”

Jim is a local artist with national awards. Everything about the man seems to be big: his body (he’s six feet tall), his heart, his voice, and his guffaw. He’s done lots of things in his life, from photography for the Navy to boatbuilding; from underground comics in Cambridge to graphic design. Today at 74 he’s retired, creating paintings with amazing realism.

He’s only lived in Salisbury for about ten years but seems to know everyone in town.

Khalil, 23, works in Idaho from May to October, at the Frank Church River of No Return Wilderness. He maintains trails, assists groups and monitors wildlife. Khalil is also six feet tall, but quite slim, and has piercing eyes. He thinks before he speaks.

The U.S. Forest Service characterizes the area as “a wilderness of steep, rugged mountains, deep canyons, and wild, whitewater rivers.” Khalil says, “When I first heard the name, it made my eyebrows rise.” He says in the old days, men would try to bring timber and mining goods down the Salmon River. The current was so swift they wouldn’t return, hence the name.

Khalil works summers at the wilderness, saving his money for wintertime adventures. This year he spent seven weeks hiking in southern Chile and Argentina.

“I was in the Patagonia region,” he says. “I had wanted to go there for a few years. I had the time, and I saved up this summer. It seemed like it was a good year to skip winter. When I’m by myself, that’s when I think most clearly. I definitely value solitude. I wouldn’t say I’m an extreme introvert, but maybe to some degree, I am.”

Khalil says he went up a few mountains, but was mostly focused on backpacking, multi-day trekking and fly fishing. He was focused on keeping his backpack really light. He spent half his time in hostels and used his tent the other half, either near towns or on the trail.

“When I was in towns, I ate a lot of food and bought food. Food isn’t as expensive there as it is in the U.S. I packed my food in the mountains and ate it cold or cooked it.”

Khalil went to college for a couple of years but says it wasn’t quite time for him.

“I was anxious to see places and meet people and have real-life experiences instead of spending a bunch of money to do something I don’t know about.

“I want to move around and work at different places. I don’t want to work at one place right now. I started off doing internships and not getting paid as much, but I recently got a more legitimate job, and now I feel like the path is more secure.

“I can’t imagine doing anything except work with public land, river and land conservation, and natural research. That’s what I’m passionate about, and I can’t imagine committing time to something else.”

At age 23 he’s already visited Croatia, Austria, Slovenia, England, Argentina and Chile, staying for long visits and getting to know the land well. He has a friend on the coast of Brazil and says that may be his next trip. “If we can find a good trip, a fishing trip, we might go to the Amazon.”

He leaves in a week, headed to California for March and the first half of April before heading back to Idaho to work.

Starting with the book, “Building a Greenland Kayak” by Chris Cunningham, Jim and Khalil have built the frame for the kayak. Jim says they’re using the principles of the book, not the plans.

To fit the kayak for Khalil’s body, Jim had him sit on the floor and measured from his backbone to the soles of his feet. This number, 50 inches, drove the measurements for the remainder of the boat.

Greenland Eskimos, Jim says, built these boats on the beach from whatever wood they could find at hand. “So it’s not really high-tech. We’ll see how it comes out, but it’ll probably be okay. It’s a time of year when we can’t test it, so he’ll have to take it home and test it in Idaho.”

Jim hauled back a 20-foot piece of fir from a boatyard in Rhode Island, four years ago.

“You just can’t get that around here. It’s 2x6x20. I got some Sitka spruce from a boatbuilding supply in Boston, and drove some back from Oregon. I bought that for the thwarts (deck beams).

Today the frame is 90 percent complete. Where the early builders used seal sinew, the Taylors are using nylon string, “artificial sinew.” Where they used seal skin, Jim and Khalil are using ballistic nylon. It’s white now, but Jim has ochre dye for it. 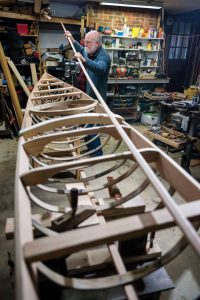 The boat is more than 80 percent finished and hopefully will be done before Khalil heads off to the west coast.
JON C. LAKEY / SALISBURY POST

“I think it’s a good idea for a non-motorized boat to be orange,” he says.

While Cunningham says the project should take about 50 hours, the pair have 80 to 100 hours in it so far, with a good week to go. They’ve got just a little bit more woodwork, then they’ll coat all the wood with tung oil. Next they’ll lash on the nylon and sew it up, a two-day job, then apply a couple of coats of urethane.

Khalil reflects on this time with his dad. “I’ve never really tried to work with him on anything before – to produce something. I guess I’ve learned some things about working with my dad. Usually we’re just hanging out and chatting. Neither of us is 100 percent confident on any of the steps. In communicating ideas that we’re not really clear on how we’re going to do it – it’s hard to be on the same page. We look at things from different perspectives. It takes a little more thought to find common ground and get on the same page, because we’re approaching it from different angles.”

Jim says, “I’ve grown as much as he has. I had to go back to Leadership 101, trying to train someone on how to do something.”

They seem really proud that there’s no metal anywhere in the boat, except for some copper rivets in the combing. The combing looks like a large embroidery hoop. It centers around the waist of the person seated in the kayak.

Jim’s original thought was to build the kayak with both Khalil and his sister Tillie. Tillie works in IT in Cambridge, in a traditional job.

“The idea was that somehow we could overlap with both of them. To build the boat with both of them. A boat is a combination of hydraulics, navigation, woodworking, basic hand tools. You need a bandsaw and a joiner. The Eskimos built this one on the beach, so hard could it be? It’s a cool boat. So this is that idea.

“Tillie fell out of the equation because she didn’t have the time to commit,” Jim says. “Khalil works seasonally, so it worked out to be the two of us.” 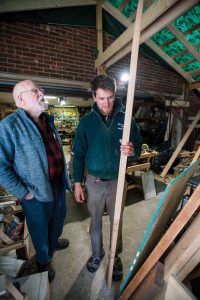 Jim looks at the piece of wood that Khalil is holding that will become one of the double bladed paddles.
JON C. LAKEY / SALISBURY POST

“This kayak was something my dad and I had talked about for a long time and this seemed to be a good time to get it done. I haven’t had the time in the last three years; this year I made the time to do it. It’s not for the sake of my having a kayak at the end, it’s the process of working with my dad.”

Khalil laughs at the thought of testing the kayak in the river of no return. “I’ll probably test it on a lake somewhere between and California, test it in the eastern Sierras, where I’m spending March and April. There are two large lakes out there. Mono Lake is where I imagine I’ll test it first, and eventually in Oregon.”

For Brown High School principal, now is the time to step back

By Susan Shinn Turner For the Salisbury Post KANNAPOLIS — When Todd Parker was a student at South Rowan High... read more