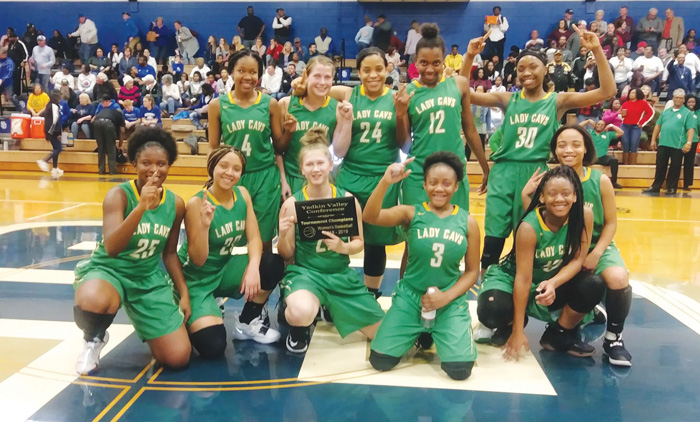 North’s girls, 3-6 at one point and looking to be, by far, the county’s weakest team in early January, won the Yadkin Valley Conference Tournament championship on Friday night.

In a county loaded with strong girls teams, the Cavaliers were the only one to win their league tournament.

The third-seeded Cavaliers beat Albemarle, 67-63, in Friday night’s final. Top-seeded Albemarle (25-2) is ranked third in 1A and hadn’t lost since falling to 3A Cox Mill in a close game in Mount Pleasant’s Christmas tournament.

“I can’t believe what just happened,” Wilkerson said. “Just a surreal moment for me, but I’m thankful for this moment and for these girls. They’ve been a blessing. They’ve worked so hard. They’ve improved so much.”

Prior to the game, Wilkerson reminded his team of the dark days in early January — a blowout loss to Salisbury at Catawba, followed by an ugly 14-point loss to Gray Stone. North managed just 29 points in each of those games. The Cavaliers were putting up more turnovers than points.

North (16-11) got 27 points from sophomore water-bug Natavia Taborn, a career high. The point guard always works for layups and free throws and, on this night, she made two 3-pointers. Freshman Hannah Wilkerson, a rock for the Cavaliers since the opening day of the season, scored 17, right at her average. In 27 outings, she’s scored in double figures 26 times. She had nine in the other one.

The other difference-maker was midseason addition Jamiya Daniels. Daniels has unbelievable spring and she bounced for four huge buckets in the fourth quarter and a 12-point night.

Wilkerson scored eight early as North Rowan took the lead. The Cavaliers were up at halftime, 29-26.

Albemarle tossed in nine of its 11 3-pointers in the second half, but the Cavaliers were able to withstand all that outside shooting with free throws and layups and a 22-point fourth quarter. Taborn scored nine in the fourth quarter.

“Albemarle knocked down tough shots, huge shots, but we won this game with our rebounding,” Coach Wilkerson said. “Second-chance points and third-chance points.”

The Bulldogs got 21 points from Zycoria Tillman and 18 from Armani Baldwin.

But the Cavaliers own their first conference tournament championship since they took the 2014 2A Central Carolina Conference tourney with a 45-43 win against East Davidson.

“I can’t say enough about Albemarle,” Coach Wilkerson said. “They aren’t big, but they are well-coached and they play with big hearts.”

Ki’Mya Lynch, McKenzie Shoaf, Makiya McDaniel and Darlissa Robbins also contributed points for a North team that will head into the 1A state playoffs with a four-game winning streak. North has won nine of its last 11.

“I’m so proud of them all that I’m at a loss for words right now,” Coach Wilkerson said. “Our fans made the trip to South Davidson, as nasty as the weather was. There was a lot of green in the stands, and that really helped our team. The girls never lost their composure.”