Good day for the Blue Bears 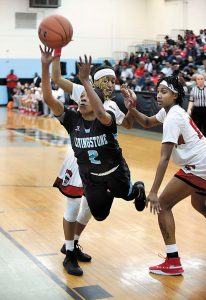 SALISBURY — It’s too bad that the season is quickly coming to an end, because the Livingstone women’s team may be playing its best basketball right now.

The victory closed the regular season for both teams. Livingstone improved to 9-19 overall, 6-12 in the CIAA and 6-6 in the conference’s Southern Division. The Blue Bears were 6-4 over the last 10 games, following a painful, 12-game losing streak in December and early January.

“We’re definitely playing better,” said Livingstone coach Tiffany Silver. “At this point in the season, they say you either know or you don’t know about your team. I believe this team is just taking it possession by possession and playing for each other.

“It (Saturday) was definitely a good win against a really good team,” continued Silver. “I guess a little bit of revenge for the game up there (90-82 loss on Feb. 2).”

The Rams fall to 15-13 and 11-7, but have a strong 8-4 division mark. Both squads now look forward to next week’s CIAA Tournament in Charlotte.

Entering the fourth period at 50-50, Livingstone scored a game-best 25 points to secure the win.

WSSU’s last lead came at 55-54 on a free throw from post player Brionna Pate, with 6:40 remaining.

A jumper by guard Daisa Harris moved the Blue Bears back on top, 57-55, and the home team, on Senior Day, never looked back. Senior Kyala Searcy had a big steal, leading to a layup from Harris, giving LC some breathing room.

Another senior, Kedra Bradley, had a big offensive rebound and layup, making it 66-60, with 2:34 left.

But the Rams didn’t quit, eventually tying the score at 67-67, on a free throw from Teara Johnson at the 1:17-mark.

Bradley scored on a layup to inch LC back on top and then after a Rams’ missed shot, Bradley was fouled and calmly sank two foul shots for a 71-67 advantage with 40 seconds left.

W-S State’s Amaya Tucker scored on a layup, cutting the deficit to two points again, but that would be the Rams’ last points of the contest. Harris, Darra Walker and Adel Allen combined for 4-of-6 free throws over the final 29 seconds to seal the victory.

Harris, a junior, had 15 points at halftime and finished the game with 29, leading all scorers. She did most of her damage at the foul line, sinking 11-of-15. Asia Green and Allen followed with 12 points and Bradley added 10.

Searcy and Green led the LC rebounding with seven each — before both players fouled out.

Pate led the Rams with 20 points, 14 in the second half. She also had a game-high 13 rebounds.

Tucker followed with 12 points for WSSU, while Laichelle Sparrow added 11, before fouling out.

“We started out really well, but we knew they were going to make a run and after they did, it took us awhile to get going again,” said Silver. “But I thought we maintained a good control of the game and then our last run couldn’t have come at a better time … the girls just stayed locked in.”

The Rams came out cold at the beginning of the contest, shooting just 39 percent in the opening half and committing 15 turnovers. LC shot 42 percent in the first half, made 8-of-13 free throws and turned the ball over just nine times.

“Obviously, the name of the game is putting the ball in the basket and if the opponent can’t possess the ball long enough to do that, then we benefit,” added Silver. “We would like to take credit for some of that with our defense, but some were unforced turnovers.

“But it’s what you do with the ball yourself and we feel that if we get that many turnovers and keep ours down, we’re pretty good,” continued the Livingstone coach.

NOTE: Pairings for the CIAA Tournament were announced officially on Saturday night. Livingstone, No. 4 in the Southern Division, will play on Tuesday afternoon at 2:20 in Charlotte against Virginia State, the No. 5 seed in the Northern Division.