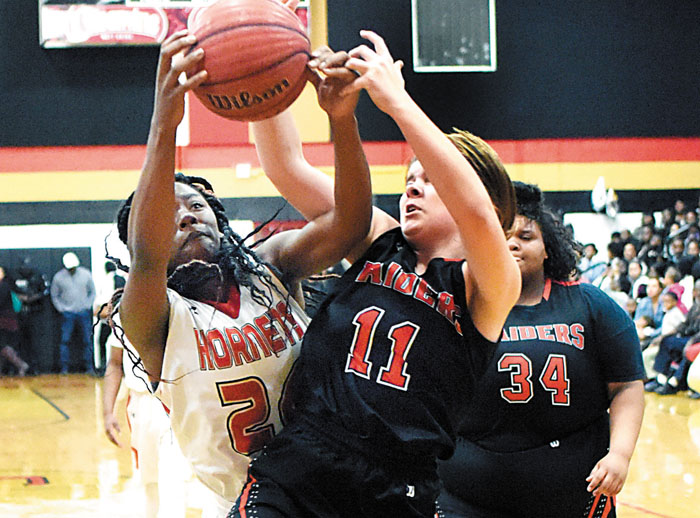 Wayne Hinshaw FILE PHOTO/for the Salisbury Post ... Salisbury’s Tacorra Robinson (24) and South Rowan’s Paige Chabala (11) battle for a rebound during an earlier game this season. Salisbury is a No. 2 seed in the upcoming state 2A playoffs, while the Raiders are seeded 22nd.

SALISBURY — The NCHSAA basketball playoff system gets tweaked virtually every season, and this one was no exception.

Carson’s boys were a strength-of-schedule victim. Despite a 13-12 overall record and a 7-3 record in the North Piedmont Conference, the Cougars didn’t make the 64-team field for the 3A state playoffs.

Only the top two teams in the six-team NPC were automatic qualifiers. That threw third-place Carson in with the stack of other at-large teams scrambling to make the field.

Carson was 72nd in the final adjusted MaxPreps rankings for 3A that were released on Saturday.

Five of Carson’s wins came against West Rowan and North Iredell, NPC teams ranked in the bottom 10 in 3A. Two wins came against a South Rowan team that ranked near the bottom in 2A. Carson had a good win (South Iredell at home) and losses to a series of stout teams (two to A.L. Brown, one to Concord, one to Salisbury, one to Davie County, two to South Iredell, two to Statesville), but the strength of schedule rating for the Cougars was pretty low.

The Cougars were a formidable team late in the year, but they lost three non-conference games early in the season when the team’s leading scorer Cole Perry was out — to Robinson, Central Cabarrus and Northwest Cabarrus. Those three winnable losses hurt. Carson started 3-8, but won 10 of its last 14.

“Our guys really competed well after that tough start without Cole,” Carson coach Brian Perry said. “To go 7-3 in conference play, that’s pretty good.  We won several tough road games, and I thought we played a lot of good teams. We’ve got a winning record, and with 64 getting in, it’s disappointing for our guys not to get to continue in the playoffs.”

Robinson, the fifth-place team in the six-team South Piedmont Conference, did make the playoff field. While the Bulldogs were only 9-16 overall and 3-7 in league play, their strength of schedule, which included three losses to second-ranked Cox Mill, was off the charts. The Bulldogs were ranked 43rd in 3A by MaxPreps.

The only Rowan boys teams that made the playoffs are North Rowan and Salisbury.

Regular-season and tournament champions in the Yadkin Valley Conference, the Cavaliers (24-2) were awarded the No. 3 seed in the 1A West bracket, which means that if they keep winning they’re assured of playing three playoff games at home. North opens the playoffs with a 7:30 p.m. game on Tuesday against Carolina International, a charter school in Concord. Seeded 30th, Carolina International (8-17) appeared in the Iredell Christmas tournament and went 0-3.

North is the only traditional public school in the top four seeds in the 1A West bracket, joining Winston-Salem Prep, Community School of Davidson and Lincoln Charter.

Salisbury is the No. 19 seed in the 2A West bracket and makes a short road trip to Cabarrus to take on No. 14 Mount Pleasant. Salisbury (17-8) tied for second in the Central Carolina Conference but is the league’s third seed after losing to Lexington in the semifinals of the CCC tournament.

Mount Pleasant (21-5) has beaten West Rowan and East Rowan this season. Three of the Tigers’ losses were to powerhouse Forest Hills.

Salisbury made a run to the regional final last season — where it was finally stopped by Forest Hills.

Davie County’s boys (23-2) are the No. 4 seed in the 4A West bracket and have a first-round bye. The War Eagles will host second-round action on Thursday against the winner of Tuesday’s Hopewell-Berry game.

Rowan’s girls teams were 6-for-6 as far as making the state playoffs.

East Rowan (14-12) wasn’t projected to make the playoffs not long ago, but the fifth-place Mustangs made it with room to spare as an at-large team. The Mustangs were 46th in the final MaxPreps adjusted rankings. The power of the NPC’s girls teams enhanced East’s strength of schedule. Carson, North Iredell, Statesville and West Rowan all rank in the top 11 in 3A.

East is seeded 24th in the 3A West bracket and will play at No. 9 Asheboro (20-7) in the first round. East’s most recent playoff wins came in 2015 when the Mustangs reached the third round.

Two NPC teams have to tangle in the first round, as 17th-seeded West Rowan (19-6) goes to 16th-seeded Statesville (20-6), the NPC tournament champ. The teams tied for third in the NPC. They split their regular-season meetings, with both teams winning at home. West scored 72 against the Greyhounds at home and 38 on the road, which gives you an idea of how hard it is to score against the Greyhounds in  Statesville.

Erwin (Asheville) and Freedom (Morganton) are 26-1 and own the top two seeds. As long as it keeps winning, Carson is assured of three home playoff games.

Salisbury’s girls, regular-season champs in the Central Carolina Conference,  have the top seed of any of the Rowan teams. The Hornets (22-4) are No. 2 in the 2A West bracket. They’ll take on No. 31 Fred T. Foard (12-14), which will make the trip on Tuesday from Newton to Salisbury.

The CCC’s girls were quite strong this season and helped Salisbury’s strength of schedule. Seven of the 10 teams made the playoffs. CCC tourney champ Ledford and East Davidson, teams that accounted for three of Salisbury’s four losses, will play in the 2A East bracket.

South Rowan (13-12) wound up as a middle-of-the-pack CCC team and has lost three of its last four games. Seeded 22nd,  the Raiders will head to No. 11 R-S Central (16-10). South’s Janiya Downs has scored 2,330 points and will be trying to extend her amazing career with an upset win.