Cokie and Steven Roberts: The wall is symbolic, not real 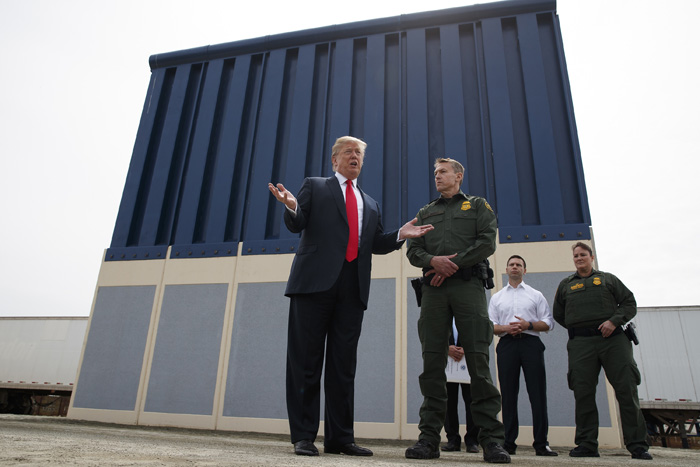 Here’s the truth about President Trump’s border wall: He doesn’t really care whether it gets built. What he does care about is building an issue, a case for his re-election. To Trump, the value of the wall is almost entirely symbolic, not real.

He’s absolutely convinced that sounding the alarm about rapists, murderers and drug dealers pouring across the border was a critical factor in electing him president. And he’s betting that similar fear-mongering will have the same effect in 2020 and give him a second term.

“The point of the wall is to show how the president is committed to border security and painting Democrats into a corner as being against that,” Marc Short, Trump’s former legislative director, told The Washington Post.

Another campaign adviser added: “Finish the wall is really: ‘Finish what we started.’ It’s about the Trump presidency more than anything.”

Trump’s opponents are equally convinced that the president is wrong. They see the wall as a symbol, too — of Trump’s blatant racism and xenophobia. And that will galvanize their own voters, especially nonwhites who will make up about 30 percent of the electorate.

After the president emphasized the border issue during last fall’s midterms, Democratic congressional candidates outpolled Republicans by 9 million votes. And a recent NPR/PBS/Marist poll found that six in 10 Americans object to Trump declaring a national emergency to fund the wall.

The president received 46 percent of the vote in 2016, but that was against an exceptionally weak opponent. His true base hovers around 35 percent — hardly a majority. And in the latest ABC/Washington Post poll, only 28 percent said they would definitely support him next year. So it’s really hard to see how emphasizing the wall swings the election to Trump.

“All things related to the declaring of a national emergency, the president is striking out in the court of public opinion,” said Lee Miringoff, who runs the Marist poll. “He’s maintaining his base and little else.”

Even if the wall is largely a political symbol, however, the debate over its fate is already dominating the capital. Sen. Lamar Alexander, a Tennessee Republican, is not running for re-election, so he’s free to speak his mind, and he thinks Trump’s declaration of a national emergency is a really bad idea. He called the decision “unnecessary, unwise and inconsistent with the U.S. Constitution.”

He added: “Our founders chose not to create a chief executive with the power to tax people and spend their money any way he chooses.”

Alexander is right. The constitutional principle is clear. Congress — not the president — has the ultimate right to spend taxpayer money. And a few brave Republicans will admit that publicly. Sen. Susan Collins of Maine told The New York Times that Trump is usurping a “fundamental constitutional responsibility of Congress. We should be opposing this strongly.”

The constitutional issue is not the only thing troubling Republicans. Some are worried that Trump is setting a bad precedent that could be used by future Democratic presidents. Rep. Mac Thornberry of Texas, the top Republican on the Armed Services Committee, warns that tapping the defense budget to fund the wall “would have detrimental consequences for our troops.”

Then there’s the obvious fact that no crisis exists on the border, making the president’s order rife for legal challenge, and 16 states have already filed suit against it. Even Trump admits he’ll probably lose in the lower federal courts, although he voiced the hope that the Supreme Court — stacked with two of his conservative nominees — will eventually give him a “fair shake.”

But the practical outcome is largely beside the point for Trump.

Stressing the wall is a potent way of saying to his core supporters: I will protect you from all those “others,” all those people and ideas you find so threatening, all those dark-skinned immigrants who speak strange languages and eat strange food and sit next to your kids and grandkids in school. And who, by the way, all vote for Democrats. Only I, Donald Trump, stand between you and doomsday.

Which argument is more powerful? Which version of the wall will sway more voters? The answer could well decide the next election.

Quotes of the Week: ‘He wanted this day’