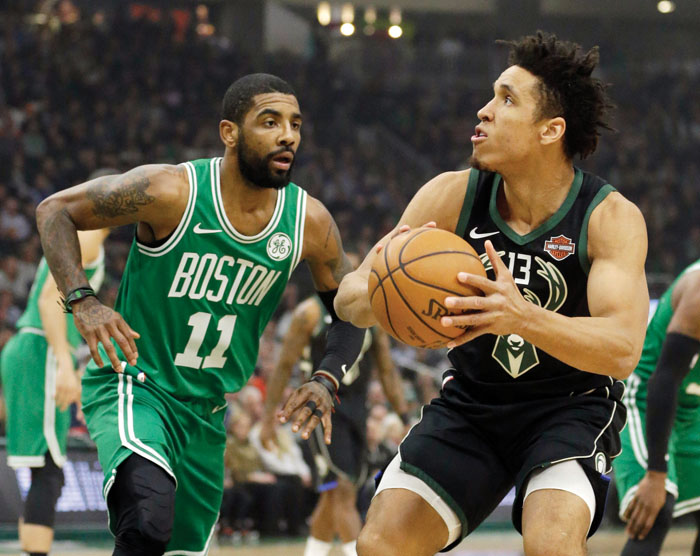 MILWAUKEE (AP) — Giannis Antetokounmpo scored 12 of his 30 points in the fourth quarter, Khris Middleton hit a 3-pointer in the closing seconds and the NBA-leading Milwaukee Bucks held off the Boston Celtics 98-97 on Thursday night.
On the second-to-last position, Marcus Smart forced a jump ball with Antetokounmpo. Antetokounmpo tipped the jump to Brook Lopez, who deflected it toward the basket, but missed as the shot clock expired.
The referees huddled during the timeout and put 3.5 seconds on the clock for the Celtics.
Smart inbounded the ball over the towering Lopez and dropped a pass into Kyrie Irving’s hands at the top of the key. With Eric Bledsoe draped all over him, Irving drove the lane, seemed to stumble and missed an awkward shot as time expired. The Bucks won the season series 2-1, their first over the Celtics since 2014-15.
Antetokounmpo added 13 rebounds, Middleton had 15 points and a season-high 13 rebounds, and Malcolm Brogdon had 15 points for the Bucks. They have won 15 of the last 17 games, including nine of the last 10, to improve to 44-14. Horford added 21 points and a season-high 17 rebounds for Boston.
76ERS 106, HEAT 102
PHILADELPHIA (AP) — Tobias Harris had 12 of his 23 points in the fourth quarter, JJ Redick hit a late 3-pointer and Philadelphia overcame All-Star center Joel Embiid’s absence to beat Miami.
Ben Simmons added 21 points, Boban Marjanovic had 19 — including three free throws in the final 1 1/2 minutes — and Jimmy Butler 18. Embiid will be out at least a week with a sore left knee.
Dwyane Wade scored 19 points for Miami, and Dion Waiters added 18.
Miami led 99-98 after Wade’s runner with 1:56 left. Marjanovic made two free throws to put Philadelphia ahead 100-99. Following Wade’s missed jumper, Redick made the 3 from the top of the key to make it 103-99 with 1:04 left.
Kelly Olynyk then missed a 3-point attempt, and Marjanovic made the first of two free throws with 38.3 ticks left to put Philadelphia up five.
CAVALIERS 111, SUNS 98
CLEVELAND (AP) — Cedi Osman scored 19 points, Kevin Love had 16 points and 11 rebounds and Cleveland sent Phoenix to its franchise-record 16th straight loss.
NBA-worst Phoenix (11-49) topped the record of 15 set March 2- April 1, 2018. The Suns’ last victory was Jan. 12 over Denver.
Love played 22 minutes in his third game since returning from foot surgery. He was 6 of 13 from the field.
Devin Booker scored 30 points for Phoenix, and Kelly Oubre Jr. had 23.
TRAIL BLAZERS 113, NETS 99
NEW YORK (AP) — Jusuf Nurkic had 27 points and 12 rebounds, new backup Enes Kanter added 18 points and nine boards in his Portland debut, and the Trail Blazers beat Brooklyn.
The center tandem was so good that the Trail Blazers didn’t even need a big night from All-Star guard Damian Lillard, who was just 5 for 21 from the field. He finished with 13 points, eight rebounds and eight assists. Kanter, who signed last week with the Blazers after losing his job with the Knicks, made his first seven shots and finished 8 for 9, missing only a 3-pointer.
Allen Crabbe had 17 points for the Nets.
___
More AP NBA: https://apnews.com/tag/NBAbasketball and https://twitter.com/AP_Sports