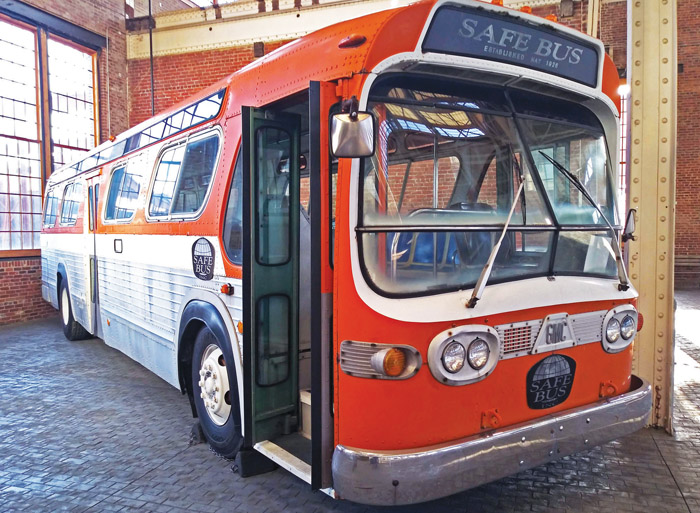 Winston-Salem Transit Authority is now displaying a bus from the Safe Bus Company at the N.C. Transportation Museum. Submitted photo

The N.C. Transportation Museum’s Black History Month offerings are planned to continue into the month of March.

A black history scavenger hunt, special displays about Winston-Salem’s Safe Bus Co. and the Carthage-based Tyson and Jones Buggy Co. as well as a big-screen presentation on the history of the Tuskegee Airmen are a part of the museum experience.

The black history scavenger map is a self-guided tour of permanent and visiting museum exhibits relating to black history.

The all-black firefighters known as the Quick Steps, black inventors who contributed to transportation safety, Jim Crow laws, and the music of turn-of-the-century lining bar gangs are all explored.

The interactive map includes a quiz for families as they tour the museum.

A temporary exhibit by the Winston-Salem Transit Authority is now displaying a bus from the Safe Bus Co., which operated in the city from 1926 to 1972.

Safe Bus Co. was formed in the 1920s to provide transportation to primarily black neighborhoods, which were largely underserved by the city’s trolley service, Southern Public Utilities Co.

The company was formed from 21 separate “jitney” operators who had been serving these neighborhoods competitively. Safe Bus continued to grow to more than 80 drivers, carrying 8,000 passengers each day.

When Winston-Salem’s contracted bus carrier departed the city in 1968, Safe Bus was tapped to provide transportation to all residents, making it the largest African-American-owned and -operated transportation business in the world.

In 1972, the Winston-Salem Transit Authority purchased the assets of Safe Bus Co.

An exhibit from the North Carolina town of Carthage on Tyson and Jones Buggy tells a story of success against enormous odds.

In 1857, William T. Jones, a freed slave, joined Tyson and Kelly as a painter. He was so successful at his job that he was made a partner in the firm two years later, and the business flourished as Tyson, Kelly & Co.

Jones fought in the Confederacy during the Civil War and was captured as a Confederate colonel. Still, he managed to be success in a wartime prison, making and selling moonshine to Union prison guards. The earnings he made were used to relaunch the buggy company when he returned from the war.

In 1872, Tyson and Jones bought out Alexander Kelly and the name of the firm changed to Tyson & Jones. About 100 buggies were produced by hand in a year’s time, but Jones pushed for innovation. With the addition of a steam engine, circular saws, drills, a planer and other machines, production jumped to 600 buggies per year.

Through the 1880s and 1890s, with continued innovation, attention to quality, and hard work, Tyson & Jones buggies could be found in all Southern states, with Dallas as one of their most important markets. At peak production, 3,000 vehicles a year rolled off the factory floor. Trend-setting members of society viewed Tyson & Jones buggies as a marker of high social standing.

Jones was one of the most successful men in town, with a beautiful home. Married to a white woman, his race was simply never mentioned in town.

While the widespread adoption of the automobile eventually led to the demise of the company, Tyson & Jones Buggy Co. is celebrated each year in Carthage.

Jones’ home is now the Old Buggy Inn, where guests can stay when visiting during the annual Buggy Festival.

America’s Tribute to the Tuskegee Airmen

Feb. 27 through March 3, the museum welcomes a mobile movie theater that tells the story of the nation’s first African-American pilots.

“Rise Above: America’s Tribute to the Tuskegee Airmen” tells the story of the Tuskegee Airmen, the famed all-black fighting squadron that broke barriers through the pilots’ courage and determination to serve the United States during World War II.

In response to campaign promises made by Franklin D. Roosevelt, the Army Air Corps reversed its long-standing rejection of black applicants to its aviator program. In 1941, a segregated air unit was created that would eventually be referred to as the Tuskegee Airmen.

The Tuskegee Airmen’s record of success in wartime was a leading factor in the desegregation of all the nation’s armed forces and helped set the stage for further civil rights changes in the decades to come.

The traveling theater presents the story on a 160-degree panoramic screen, enveloping viewers with the feeling of being in the cockpit, soaring above the clouds in a P-51C Mustang, the signature aircraft of the Tuskegee Airmen.