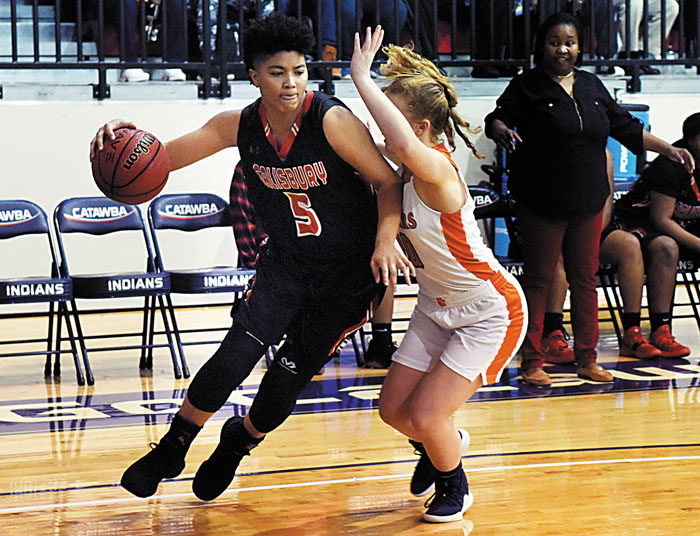 WELCOME —The truth hurts — and it was delivered with clarity Friday night.

“What went wrong?” coach Lakai Brice repeated backstage at North Davidson High School, where Ledford splashed 10 3-pointers and earned a 68-57 victory in the CCC Tournament final. “I don’t really know. The start of the game went wrong. When Bry (Troutman) missed her first foul shot, I knew it was going to be a long night.”

Blame it on Lyrik Thorne, the Ledford sharpshooter who dropped a career-high 52 points and ran figure-8’s around Salisbury’s well-intentioned defenders.

“They did try,” said the 5-foot-6, Catawba-bound guard. “They tried a box-and-one. They tried two people on me. They tried coming at me from the weak side. I’m glad, because they pushed me to do what I had to do.”

Nothing seemed to work. It ended Salisbury’s pursuit of its first tourney title since 2011. The Hornets (22-4) went big-game hunting and came home empty-handed, their five-game winning streak over, after shooting just 24 percent from the field (16-for-66). They led only once — when Troutman converted the second of two free throws 12 seconds into the game.

“It just wasn’t our night,” said Troutman, a 6-2 senior. “None of our shots were falling.”

Troutman, a Wingate signee, finished with a double-double (25 points, 11 rebounds) and added six steals. But she managed only one field goal and eight points in the second half.

“We played the best defense we could play,” winning coach Chris Doby said, after Ledford (20-6) garnered its second straight league tournament. “It seemed like (Troutman) killed us in the first half. They’re all tall and long and have so much reach on us. We just had to get boxouts, get stops and make them defend us.”

Apparently, that worked. Salisbury fell behind, 9-3, in the first two-and-a-half-minutes and trailed, 22-15, after Thorne hit a 16-foot jumper late in the opening quarter. SHS used Troutman’s spinning layup from the left block and Rachel McCullough’s 3-pointer to stay within 32-27 at halftime.

“Bry was very aggressive, said Brice. “She’s played that way the last couple games. She’s not settling for the jump shot, but taking the ball to the basket and doing some really good things. If she gets doubled, she looks for her teammates and makes all the right passes.”

Troutman’s layup with 5:21 remaining kept Salisbury within 57-48. But Ledford made eight of 12 free throws and got a rainbow 3-pointer from freshman Ashley Limbacher in the closing minutes — maintaining a double-digit lead.

When it ended, there was no doubting the star of the game.

“I really felt good,” Thorne said, after sticking four 3-pointers and netting 31 points in the second half. “I knew I had to take over. My teammates, they set me up for layups, making plays on the fly and 3-pointers. They gave me the freedom to take the shots I wanted.”

So did the Hornets.

“I wish we could have done a better job defending Lyrik,” said Brice. “We all knew coming into the game what a great player she is. We just let her get off too many shots and score too many points. Fifty-two, that’s too many to get against a team like us.”

Doby wasn’t surprised, implying Thorne’s performance was as normal as cream cheese on a bagel.

“Well, No. 1, she’s got an offensive mindset,” he said. “She likes to attack. Nothing against Salisbury, but we’ve seen very few players that can stand in front of her and make her stop. She always has the green light, but this was as well as she’s shot it in a while.”

NOTES: Both teams will participate in the 2A state playoffs beginning next week. Pairings will be announced Saturday. … Despite the loss, Salisbury has won 13 of its last 15 games. It’s lost two of three against Ledford this season. … A total of 42 personal fouls were called and Doby was assessed a technical with 2:36 remaining in the third quarter. … Ledford won its fourth straight tourney title. It captured the Mid-Piedmont Conference Tournament six of the last seven years it was a member.