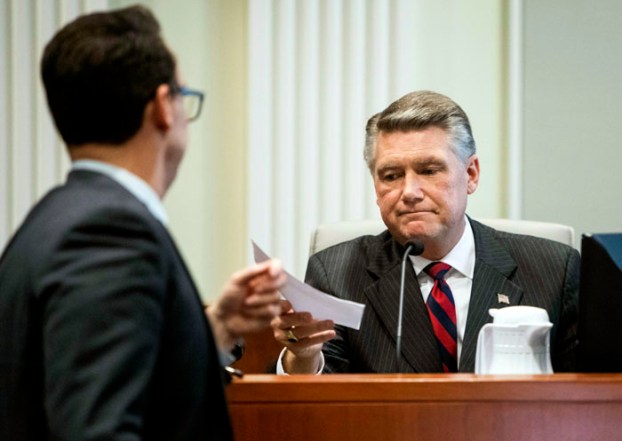 Among those in potential legal trouble are the central figure in the scandal, political operative Leslie McCrae Dowless, and some of those working for him. According to testimony heard by the board, they illegally gathered up voters’ absentee ballots and, in some cases, filled in votes and forged signatures.

The Republican candidate for whom Dowless was working, Mark Harris, has denied knowledge of any illegal practices by those working for his campaign. But he, too, could come under legal scrutiny.

Harris led Democrat Dan McCready by just 905 votes out of about 280,000 cast last fall in the district in the southeastern part of the state. But the state refused to certify the outcome because of suspicions Dowless tampered with mail-in absentee ballots in rural Bladen and Robeson counties. Under state law, only voters and their close relatives can handle completed ballots, a measure intended to guard against tampering.

On Thursday, the five-member elections board unanimously ordered a do-over election after Harris abruptly reversed course and called for a new one. No date has been set.

McCready said Friday he is ready for another election and he intends to be a candidate. Harris has not said whether he intends to run.

Wake County District Attorney Lorrin Freeman in Raleigh said her office has been investigating potential Bladen County voting irregularities for over a year. The investigation has been expanded to include last year’s election, she said.

In an email Friday, she said she expects the state elections board to submit its investigative files to her office, and “we will determine what, if any, supplemental investigation is required.”

Federal prosecutors also could pursue charges under a law against interfering with an election for federal office, state elections board attorney Josh Lawson said. The U.S. Attorney’s Office in Raleigh has refused to say if an investigation is underway.

Dowless has denied wrongdoing through his attorney. He refused to testify at the elections board hearing without a promise of immunity from prosecution.

Dowless’ step-daughter, Lisa Britt, could face criminal charges after admitting under oath that she collected dozens of ballots and forged signatures and dates while working for him.

As for the GOP candidate himself, Harris admitted to writing personal checks to Dowless in 2017, a potential legal violation if they weren’t reported by his campaign. Also, he could be in legal jeopardy over his testimony during the board hearing.

On Thursday, Harris was on the stand when an attorney for the elections board pressed him repeatedly over whether his attorneys had turned over crucial emails. McCready’s lawyer, Marc Elias, reminded Harris that he was under oath.

Harris’ lawyer asked for a break, and Harris returned to the stand more than an hour later to read a statement admitting he misspoke, saying ill health, including two recent strokes, had caused confusion and memory problems. He then agreed that his apparent election victory was tainted and a new election was needed.

“What we saw this week in the hearing was a culture of corruption. We saw emails that were hidden from the board under subpoena. We saw lying on the stand,” McCready said Friday.

Asked if he is satisfied at where the investigation stands, the Democratic candidate responded: “I imagine that the district attorney’s office and the U.S. attorney will probably be picking things up.”

And if Harris runs again, McCready said, “He is going to need to ask for forgiveness from the voters.”

McCready told supporters Friday at a brewery in Waxhaw, near Charlotte: “I am running in the special election to represent the people of the 9th District.”

“Folks, there’s a lot of people that have had their confidence shaken in recent weeks because of the fraud conducted by Mark Harris’ campaign,” McCready told a gathering of several dozen supporters. “There’s a lot of people right now in North Carolina that are disillusioned in our electoral process.”

He told the crowd that he and his team are going to “knock on every door” in the district to earn votes and to reassure constituents that he’s the type of politician who will do the right thing.

“We’re going to talk to people about doing what’s right instead of what’s wrong,” he said.

McCready has been assembling a new campaign staff and raising money to run again in the district that stretches from Charlotte through several counties to the east. His campaign finance report showed McCready raised $487,000 during the final five weeks of 2018. His campaign sent out a campaign fundraising plea late Thursday, citing the board’s decision.

Also Friday, President Donald Trump weighed in on the issue, saying he condemns all voter fraud “and that includes North Carolina.”

Trump was asked why he had not condemned what has happened in the 9th District.

“I condemn any voter fraud of any kind, whether it’s Democrat or Republican,” Trump said. But he quickly added that Texas and California as places where votes “were not exactly properly done.”