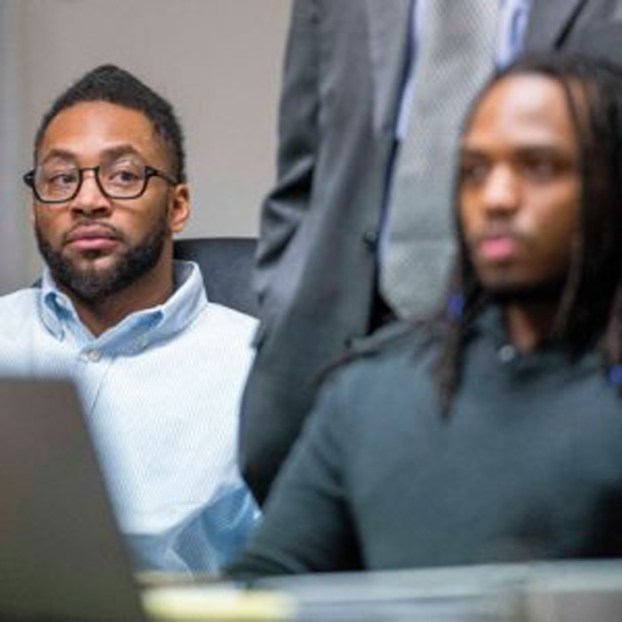 SALISBURY — Two men will spend the rest of their lives in prison after jurors on Friday found them guilty of the 2014 murders of Antonio “Tony” Walker and James “Junior” Walker.

The victims were shot multiple times inside their Spencer home.

After a couple of hours of deliberations on Friday following nearly two weeks of testimony, jurors unanimously said that Darius Abel, 29, and James “Mikey” Robinson, 28, are guilty of first-degree murder. Both men were sentenced to life in prison without the possibility of parole.

Sobs could be heard from the audience where Angela Hill, the mother of Tony Walker, sat surrounded by her family, including granddaughter Lamiyah Walker, who tried to speak about her father, Tony Walker, but was overcome with emotion.

Cries could also be heard from the families of Abel and Robinson as the verdict was read and the sentence issued by Superior Court Judge Jeffery Carpenter.

Both Abel and Robinson declined to speak, but they said through their attorneys — Darrin Jordan of Salisbury and Jay White of Concord — that they will appeal the verdict.

A week ago, Angela Hill testified that she and her daughter, Jasmine Walker, along with Hill’s brother, Junior Walker, were forced to the ground at gunpoint by three men wearing gorilla masks who forced their way into their Fifth Street home.

The two women had returned from watching a movie and were talking with Junior Walker when the intruders walked into the home. The women thought the men were friends of Tony’s there to play a joke on them. But they quickly realized it was not a joke.

According to both mother and daughter, Kenneth Abel asked for Tony Walker by name. The other two intruders, identified by Kenneth Abel as his cousins Darius Abel and James Robinson, went into a bedroom.

A scuffle ensued and shots were fired, according to testimony. The men left the bedroom, and Tony Walker stumbled out of the bedroom, bleeding from his side. When Junior Walker tried to protect his family by reaching for his own gun, Kenneth Abel warned him not to do it.

The women said Junior Walker was shot multiple times, including in the head. He was beaten with the butt of his own gun. Tony Walker was shot again in the back and neck.

Investigators from the Spencer Police Department and Rowan County Sheriff’s Office said Kenneth Abel dropped his cellphone inside the house. Abel told the court he and Darius Abel tried to go back to the house but heard sirens.

Kenneth Abel accepted a plea arrangement in September in exchange for testifying against his cousins. He has not been sentenced yet but is expected to serve less than 26 years.

Investigators also found a gorilla mask, a glove and a du-rag not far from the scene. The glove contained the blood of Junior Walker and Tony Walker. The inside of the glove had DNA consistent with that of James Robinson, according to a lab technician who testified.

An iPhone that was tested had Kenneth Abel’s DNA on it, but the cellphone case was inconclusive because of the insufficient quantity of DNA it contained.

A former teacher spotted the three men the night of the murders buying three gorilla masks from the Halloween section of Walmart. The former teacher told the court he recognized Darius Abel and James Robinson but noted a tall man was with them.

The three men were captured on store surveillance video buying the masks and leaving the store separately, then meeting in the parking lot.

A neighbor told the court he saw two men walk through his backyard shortly after the murder while walking his dog.

The men would later meet up at Darius Abel’s home and then go their separate ways. Kenneth Abel fled to Winston-Salem, where a girlfriend lives, and Robinson left the area and was arrested a few weeks later in Roanoke Rapids.

SALISBURY — Rowan County Assistant District Attorney Paxton Butler said Thursday that the evidence in the 2014 murders of a... read more