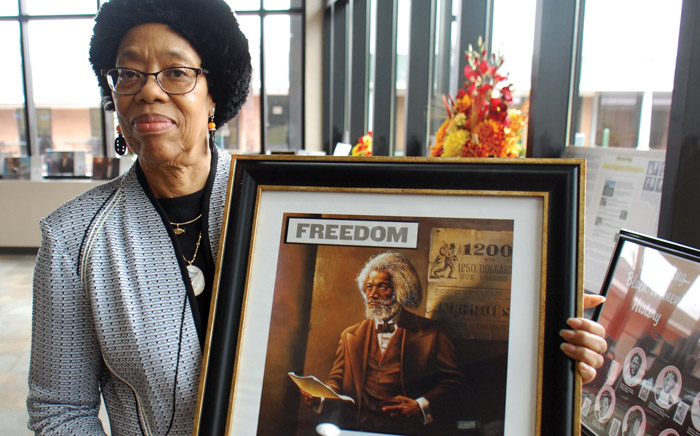 Mary A. Love often incorporates her stamps that recognize black heritage with other media to make attractive, educational displays, such as this one on Frederick Douglass. Mark Wineka/Salisbury Post

SALISBURY — When you have a stamp collection like Dr. Mary A. Love’s, you might lean toward keeping it tucked away in a safe and only bringing it out at dinner parties or to impress fellow collectors.

Not so with Love.

“I say a stamp collection doesn’t always have to stay in a closet,” says Love, an adjunct professor of Christian education at Hood Theological Seminary.

Love has a valuable, focused collection of U.S. Postal Service stamps that celebrate black heritage. She incorporates her stamps into storyboards, collages, posters, framed displays and other media as a way to educate.

“The teacher in me tries to come out in the way I collect,” says Love, who retired in 2016 as editor of church school literature for the AME Zion Church. “I still preserve (a stamp), yet it’s in a shareable manner so people can learn from it.”

For the past two weeks — today is the last day — Love had displayed her stamps and considerable information behind many of the individuals and eras represented in a section of the Aymer Center at Hood.

The reactions are always the same.

First, those spending time with the displays say they had no idea so many people of color have been honored with stamps.

Second, they acknowledge learning about heroic, talented, courageous, trailblazing individuals with whom they were unfamiliar.

U.S. stamps failed to recognize black heritage for a long time. It wasn’t until 1940 when Booker T. Washington became the first African-American to be honored with a stamp — 93 years after the first U.S. postage stamp was issued in 1847.

“I had to look long and hard to find a mint Booker T. Washington stamp,” Love says.

Since 1940, the Postal Service has done a much better job recognizing black history and culture.

“The last I counted,” Love says, “I’d say it was roughly 135” people of color honored on stamps.

That number doesn’t include stamps that show people of color more generically, not specific individuals — things such as sickle cell awareness, the Broadway musical “Porgy & Bess” and the Kwanzaa holiday and civil rights events, such as the Montgomery bus boycott in 1955, the Little Rock Nine in 1957, the March on Washington in 1963 and the Selma march in 1965.

The Postal Service began its “Black Heritage Series” in 1978 with the Harriet Tubman stamp, and an African-American individual (he or she must be deceased) has been honored with a stamp each year since.

Singer Lena Horne was, for example, on the 2018 stamp; the late entertainer Gregory Hines graces the 2019 stamp. A Marvin Gaye stamp will debut April 2.

The collecting and studying of stamps is called “philately,” and Love belongs to the Ebony Society of Philatelic Events and Reflections — ESPER — named for the group’s founder, Esper Gold Hayes, who died earlier this year.

Fascinated by stamps as a kid, Love tried an early homemade collection of stamps she would cut off envelopes on mail coming to her house.

Her preservation of that collection failed miserably, and she gained interest again only when a seminary professor took her on a tour of the postal museum in Washington and she also attended a stamp show.

“I got serious about doing the collecting 20 years ago,” Love says, and by then she knew the proper preservation techniques and also made her focus African-American heritage stamps because of their educational value.

Her favorite stamp is that of Ida B. Wells, who was born a slave in Mississippi in 1862. She went on to report on the lynchings of blacks, while also organizing societies against lynchings and lecturing across the country.

Love has visited the Montgomery, Alabama, museum that documents the tragedy of lynchings in America.

“It’s a painful site,” Love says, “but I think we need to know and care about the lives of others.”

Love recently was the featured guest in a Salisbury children’s program sponsored by Families and Communities Together. She brought stamps, of course.

The parents and children had been told to bring their computer tablets or smartphones to the session for research purposes. Some of Love’s informational displays also were available.

Love handed each child two different African-American stamps from her collection — showing individuals they would not know — and she asked the children to find out who the people were and report back to her.

They could keep the stamps.

“I wanted to be a motivator for them,” Love says, adding she hopes the kids would appreciate the stories of people overcoming adversity to be successful. “We ran out of time because the kids got into it and the adults as well.”

Love, who lives in Charlotte, also incorporates stamps into a new business she has called Love’s Creative Resources.

“I just love creating,” she says. “I call myself creative crazy.”

She likes to think of those stamps as always being visible in a home, especially where children live.

“I love to share my hobby, which for me, is more than a hobby,” Love says.