North Hills students study the mystery of glass and fire 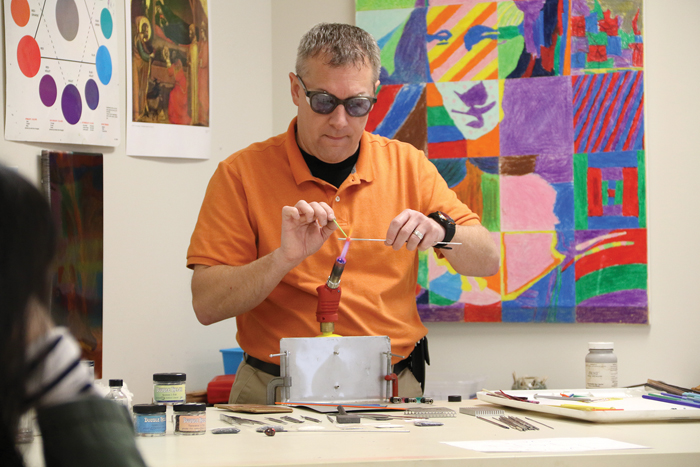 Have you ever looked at a glass bead and admired its beauty? Was it the shape that caught your eye or was it the colors that drew your attention?

Often, these beautiful characteristics are created by using fire and glass.

Students in Michael Owens’ visual art classes at North Hills Christian School were able to see glass transformed into beauty as they learned about lampworking.

Lampworking, also known as flameworking or torchworking, has been documented as early as the fifth century B.C. It was first practiced with oil-fueled lamps; modern artists use torches that are fueled by mixing propane gas, natural gas or butane with air or oxygen.

MAPP gas is also used as a portable fuel for hobbyists.

“Fire is powerful, and I was amazed to see how it was used to create beautiful pieces of art,” a fifth-grader said during the lampworking presentation.

The glass used in lampworking is sometimes referred to as soda-lime glass or “soft glass.” Soft glass melts at a lower temperature but does not react well to sudden temperature changes, which cause thermal shock to the glass.

Owens has been a lampworking artist for nearly 12 years. When he started with lampworking, it was to produce unique beads to add to his custom handmade jewelry.

“Lampworking to me now is very therapeutic and relaxing,” said Owens. “The glass is very unforgiving, yet extremely manipulative for even the newest artists in glass. Showing this art form to my students has hopefully opened their minds and eyes to other possibilities within other art mediums.”

High school student Anthony Schnitzer said his favorite part of the demonstration was “learning about the different mediums and opportunities to make a decent living off of it.”

Students were particularly entranced by how the flame melted the glass rods and the beads that were created.

“I loved seeing how the glass slowly turned into a putty state and formed a beautiful bead,” said middle school student Meg Weaver.

North Hills Christian School is a nondenominational college-preparatory Christian day school serving students in junior kindergarten through high school. It is accredited by the Southern Association of Colleges and Schools, a division of AdvancEd, and by the Association of Christian Schools International, an organization recognized by the North Carolina Division of Non-Public Education.

The water is rising