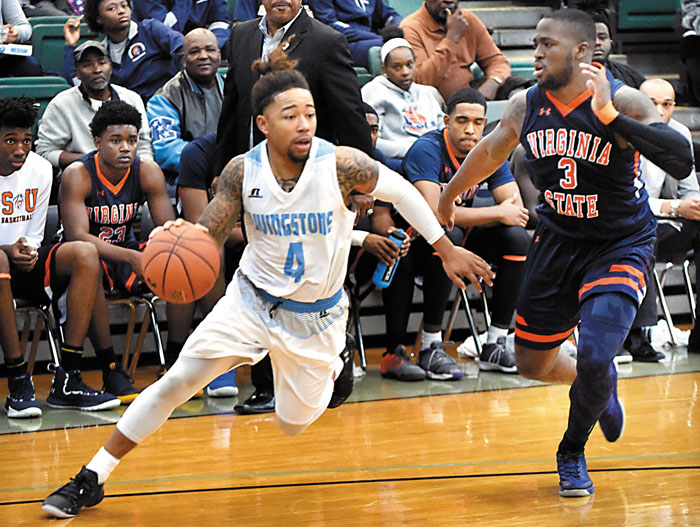 Wayne Hinshaw file photo/for the Salisbury Post ... Livingstone guard Roger Ray (4) makes a move, in an earlier game this season. Ray scored a career-high 38 points on Wednesday night against St. Augustine’s but it wasn’t enough, as the Falcons won, 91-85.

SALISBURY — On a night when the St. Augustine’s men’s basketball team could do no wrong, Roger Ray couldn’t make it right.

“The young man brings it every night,” coach James Stinson said, after Livingstone (16-10, 9-8) fell to 7-4 in Southern Division games. “He’s going to play until he can’t play any more. He tried to motivate his teammates, to get them to play at his level. But they didn’t respond.”

Instead, Livingstone coughed up a 12-point first-half lead and secured a No. 2 seed in the upcoming conference tournament. Ray — who shot 9-for-20 from the field and added seven assists — was unavailable for comment because he required treatment for a strike to the throat, suffered in the final minute.

St. Aug’s (9-16, 6-11) improved to 4-7 in division play and avenged a Jan. 30th overtime loss to Livingstone. The Falcons received a career-best 40 points from cool-under-pressure guard Tyre Gathright, a 6-foot-4 senior who converted 11-of-17 field goal attempts and 14-of-15 free throws.

“He’s like that every day,” said winning coach MarQus Johnson. “That’s how he walks around campus — like a silent assassin.”

Gathright fit the part, especially after Livingston slam-dunked and ally-ooped its way to a 37-25 lead in the first 17 minutes. His scoop layup, followed by a three-point play and four straight free throws, helped SAU close within 40-37 by halftime.

“We got punched in the mouth early,” Gathright said. “It’s the way we responded that got us back in it. Livingstone is a tall team. We had to focus more on little things like passing, coming the ball and doing the fundamentals.”

Despite its highest output of the season, Johnson felt St. Aug’s needed to slow the game’s often-frantic pace. “At halftime, we were down three and had allowed 11 points off turnovers,” he said. “That told me we just had to settle down and start taking our time.”

That strategy helped the visitors launch the second half on a 14-3 scoring spree. Jalen Gaddy’s 3-pointer from the right corner gave the Falcons a 44-43 lead they never surrendered. A minute-and-and-a-half later Gaddy connected again, this time from the left side, to complete a 12-0 that made it 51-43. The lead ballooned to 67-53 when Gathright scored on a runaway layup with 10:21 to play.

“It was more ourselves, not something they did,” Handley said, moments after LC absorbed its third loss in four games. “We came out in the second half lackadaisical. We didn’t bring the effort, the energy we had in the first few minutes of the game.”

Both coaches pointed to rebounding as a pivotal factor. St. Aug’s, led by D.J. Harrison’s double-double (14 points, 11 rebounds), held a 39-34 advantage off the glass.

“We didn’t get anything out of our post,” Stinson said. “Nothing. Not a thing. There’s no excuse for that, but it’ll have to get better.”

LC’s starting front court of 6-10 sophomores Navar and Lydell Elmore combined with 6-10 junior Kenny Grant for all of six rebounds. When crunch time arrived in the closing minutes, each occupied a seat on the bench.

“Control the boards,” Johnson said. “That was one of our keys tonight. Livingstone’s guys are all so long — and that gives them a chance to win every game.”

The Blue Bears inched as close as 79-76 when Ray hit a 21-foot splashdown with 3:18 to play. Then Handley’s acrobatic, over-and-under layup made it 83-78 with 1:54 on the clock.  But down the stretch, St. Aug’s sank eight consecutive free throws and escaped with the win.

“They out-hustled us and got the big rebounds in the second half,” Stinson said. “That says they’re prepared for the tournament — and we’re prepared to exit. But it’s still CIAA basketball and anything can happen.”

NOTES: The Blue Bears shot 55.6 percent from the field in the first half before finishing 29-for-66. … Ray was 7-for-14 from three-point range and made 13 of 15 free throws. … Division-leading Shaw (8-3) clinched a No. 1 seed in the conference tournament with a 65-62 win against Fayetteville State. … Livingstone closes its regular season at 4 p.m. Saturday when it hosts Winston-Salem State.