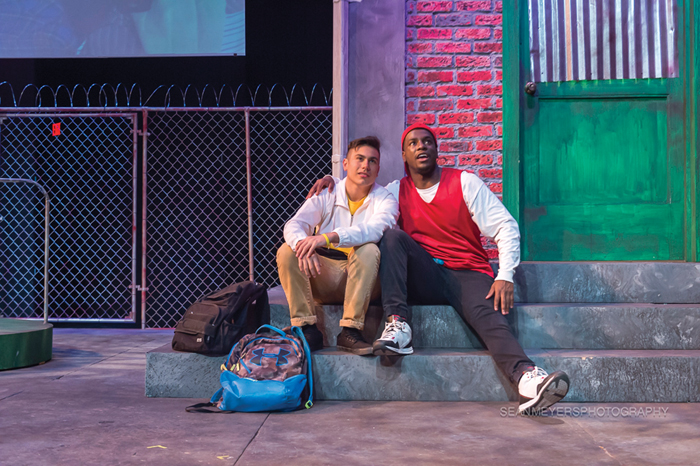 Through a partnership between the Catawba College Theatre Arts Department and Lee Street theatre, launched in fall 2017, junior or senior theater arts students may apply each semester for an internship at Lee Street for three hours of academic credit.

Livers is happy that he applied and was selected.

“At Lee Street, they give the full-out experience to the audience that I love,” Livers said. “It’s a great working environment. Craig Kolkebeck (artistic director) and Rod Oden (technical director) run a tight ship, and I really love how they work. They welcomed me with open arms, and I’ve enjoyed every minute of it.”

So far this semester at Lee Street, Livers has been stage manager for the show “The Mystery of Irma Vep”  and was a teaching artist for students at Henderson Independent High School who are preparing to stage an original production at Lee Street on March 15-16.

He’ll help them narrow down their production ideas and finish the script. He’s also looking forward to the possibility of being cast in a role in Lee Street’s upcoming production of “Blood Done Sign My Name,” a play by Catawba theater arts alumnus Mike Wiley that opens April 18 and runs through April 27.

“Mason has grown so much as an artist and young educator since coming to Catawba,” said Beth Homan, chairwoman of theatre arts. “CataLST just seems like the next logical step in this growth. We are particularly excited that Lee Street is able to bring him together with accomplished alum and Blue Masque Hall of Famer Mike Wiley. I think they have a tremendous amount to offer one another.”

Kolkebeck said he is thrilled to have Livers as an intern at Lee Street theatre.

“With education as the primary focus of his internship, his working with students at Henderson is right on target with where I had hoped this collaborative program would go,” Kolkebeck said. “With the gross decline and even demise of theater education in our school systems, there is an even greater need for theater practitioners to get into the communities and help young minds find their voices through theatrical presentation.

“Seeing Mason’s joy when he talks about what he’s accomplished with the kids tells me we’re right on track with where we want to head with the program. Having the secondary portion of his internship be as an actor in ‘Blood Done Sign My Name’ is the icing on the cake.”

Livers, who is from Charlotte, landed at Catawba College in tandem with a friend from high school.

“I was looking to come here to play basketball, and I liked the smaller college. I felt like I’d be a person here rather than a number in a seat.”

When knee injuries changed his basketball plans, he stuck with Catawba because of its strong theatre arts reputation and offerings. He looks back on his decision without regret. He is a theater education major and is pursuing a minor creative writing.

“Since I like to write and create things, I thought theater education would serve me best. I like to create my own stuff and this gives me more opportunity to create.

“I like being in the theater. It makes me appreciate what we do more because I see what it takes to put on a show. We’re all working together and collaborating. It’s not just a one-man show. I know that when I’m working on a show, I’m all in.”

“I started theater late – in my senior year in high school. My role as the Cowardly Lion in ‘Wizard of Oz’ was my first show. Then, we did a show called ‘A Curious Savage,’ and I played a character named Jeff who suffers from PTSD. It was a very strange but funny play, and it was very hard to stay in character.”

“It was my first real taste of what musical theater was and the first time I tap-danced,” he said. “I do dance, but I never took a class; it just came natural for me.”

Last summer, he landed an internship at Kenny Leon’s True Colors Theatre Company in Atlanta. He spent the summer going into schools to help conduct theater workshops with students. He was also tapped to do a pre-show speech for the company before a production of “Dot.”

As a CataLST intern, Livers says he looks forward to continuing his theatrical experiences.

“Working with Craig on a show as an actor, and that was one of the reasons I was so interested in the internship at Lee Street. Before he casts a show, he immediately blocks the show, and I like that. It makes it easy as an actor and a stage manager.”

Livers, 22, has this advice for other students who seek to follow a path similar to his: “Stay grounded and patient. Not everything is going to happen to you at once. Stay level-headed and stay the course.”

Editor’s note: In addition to the semester-long CataLST internship collaboration between Catawba and Lee Street, 2019 marks the second year that the Catawba Music Department has been part of offerings at Lee Street theatre. Catawba music instructor and banjo player Jeff Little will perform with the Jeff Little Trio and Catawba College Vernaculars (Catawba student musicians) at Lee Street at 7:30 p.m. March 30. For tickets, visit www.LeeStreet.org.

Catawba theater arts juniors and seniors who have passed 60 hours and met GPA and additional departmental requirements are eligible to apply for the CataLST internship. Applicants should seek intensive professional experience in their chosen area of emphasis (acting, directing, design, stage management, and others) and want to build skills and resume credit in a secondary focus area of their selection.