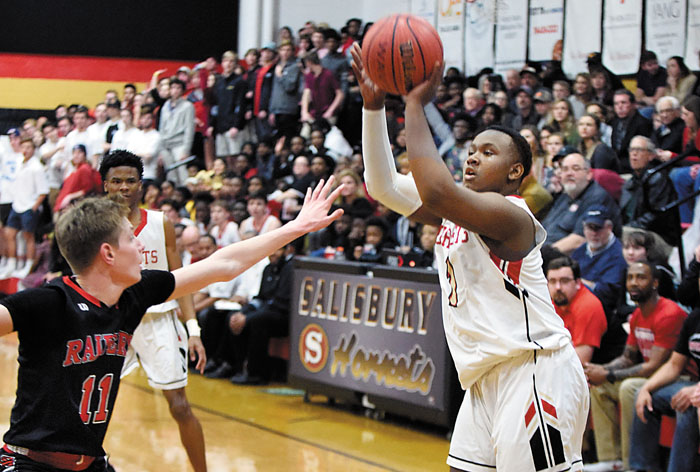 The cold-shooting Hornets scored only 16 points in the first half.

The teams tied for second in the regular season and had split their head-to-head meetings, so Thursday’s game served as a tiebreaker. Lexington (16-9) will be seeded as the No. 2 team from the CCC for the 2A state playoffs. Salisbury (17-8) is still an automatic playoff qualifier as the No. 3 team in the 10-team conference.

Salisbury will await word on its seeding and first-round opponent. The NCHSAA will release the brackets on Saturday. First-round games are set for Tuesday, Feb. 26, with the second round on Thursday, Feb. 28.

The difference in winning and losing for Salisbury on Thursday is a somewhat lesser seed for the playoffs. Salisbury wasn’t projected to have a first-round home playoff game (the top 16 seeds in the 2A West bracket will play at home) —  win or lose.

Lexington, a 72-55 loser to Salisbury in the most recent meeting of the teams in Lexington, used 2-2-1 full-court pressure and held the Hornets to their second-lowest offensive total of the season. Salisbury’s shakiest scoring effort came in a 69-38 setback against North Rowan at Catawba in early January.

“We know they’re a press team, but a lot of press teams don’t like to get pressed,” Lexington coach Josh Pittman told the Lexington Dispatch.

Salisbury made only one 3-pointer all night, and it’s difficult to drive and finish against Lexington, which has 6-foot-9 center Alex Holt (21 points, 16 rebounds) protecting the rim.

Lexington jumped to a 12-2 lead at the outset and was up 26-17 at the break.
Kevin Chawlk and Cam Gill led a a charge by the Hornets to get within 29-27 in the third quarter, but Lexington held the lead with buckets by Holt and Tedric Jenkins.

Salisbury made another run in the fourth quarter as Lexington lost Holt to his second technical. The Hornets pulled within three at 46-43, but Zay Kesler missed two free throws.

Joseph Witherspoon’s stick-back bucket for the Hornets as he was fouled made it 46-45, but he missed the free throw that would have gotten the Hornets even.

The Hornets had several more opportunities but didn’t score again.

Gill led the Hornets with 13.