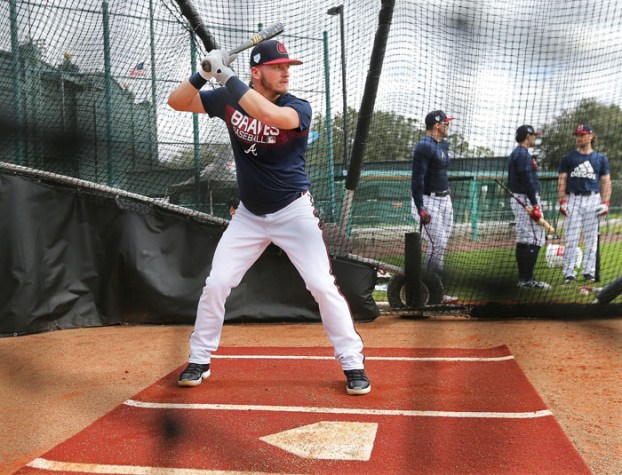 Donaldson, at 33, trying to prove he can stay healthy

LAKE BUENA VISTA, Fla. (AP) — Finding a job was pretty easy for Josh Donaldson. Proving he can keep it will be the tough part.

The former AL MVP didn’t have to wait long for a new opportunity, signing a one-year, $23 million contract with the Atlanta Braves less than a month after the World Series ended.

“I didn’t expect it to go that quickly,” Donaldson said Wednesday, the day before his first organized workout with the NL East champions. “It was my first time in free agency so I had something of an idea, but you don’t really know. I was very happy with the timing of it. They gave me the ease of the entire offseason to know which team I was going to be with.”

At 33 and coming off two straight injury-riddled seasons, the third baseman understood his market value had changed, that he would have to prove he can play an entire season.

“I wasn’t expecting much (contract) length,” he said. “I think you have to be realistic in what you’re looking for.  . . . One year, I felt, was a great opportunity to come here and help this organization. I feel like if I go out and play well, there could be a chance for more years after this.”

After finishing among the top eight in AL MVP voting four straight times and winning the award with Toronto in 2015, Donaldson was limited to 113 games by a calf injury in 2017. Last season, due mostly to a shoulder injury, he played in just 52 games with the Blue Jays and Cleveland Indians.

“I’m not a robot,” he said. “Everybody, if they play long enough, is going to deal with injuries — 2017 was the first time I’ve missed time due to an injury. Then 2018 was a lost season because of injuries. As we continue in our careers, our bodies are constantly evolving, and we’re just trying to be ahead of that and focus on being as efficient and as strong as possible.”

Donaldson spent the offseason working on his lower body, trying to gain strength in his feet and toes and improve his mobility.

While acknowledging little familiarity with the former American Leaguer, Braves manager Brian Snitker knew Donaldson would be a good fit when he called him soon after the signing.

Donaldson, who grew up in Alabama as a Braves fan, has a sense of coming home at a crucial point in his career.

“I just have a little more to prove this year than probably in years past,” he said.

NOTES: Although Thursday will mark the Braves’ first full-squad workout, the routine won’t be much different from the last three days, with everybody having reported. “We’ll have some team-oriented things in, we’ll start working on some fundamentals. That’ll be the biggest change,” Snitker said.  . . . RHP Touki Toussaint and LHP Kolby Allard will face the New York Mets in Saturday’s exhibition opener at Port St. Lucie.