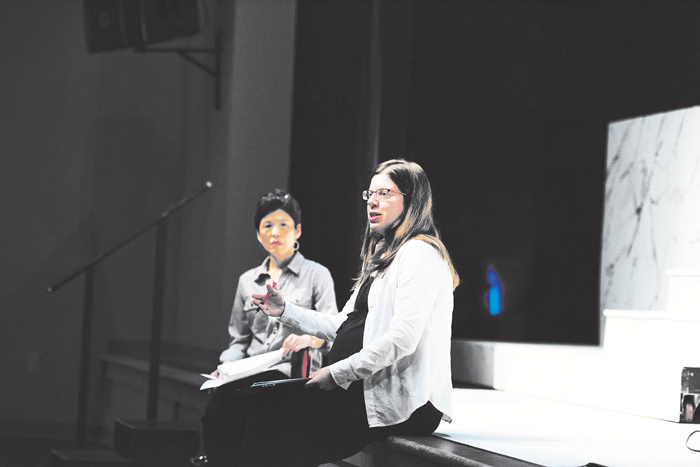 A gathering of community college and university educators in music, visual arts and theater to support the associate in fine arts degree has morphed into a statewide conference that’s bringing more than 200 people to Salisbury this weekend.

The N.C. Community College Fine Arts Conference will be held today through Saturday downtown. Based at the Meroney and Norvell theaters, the conference will provide education, networking and arts opportunities for representatives from more than 50 community colleges, public universities, and independent colleges and universities throughout the state.

By the time the three-day conference is done, estimates are that it will provide between $65,000 and $75,000 of economic impact to the city.

“Visitor spending is up 60 percent since 2008 because of events such as this, with overnight stays,” said Tara Furr, chief marketing and communications officer for the Convention and Visitors Bureau. “This is a good, medium-range impact event. Jenn (Selby) should be very proud, because the conference has continued to grow year after year. This is the first year we’ve partnered with them for an overnight stay package. In 2018, we supported 38 different groups, which represented 2,700 room nights and $11 million in economic impact.”

The conference had its genesis in 2012, the year the North Carolina General Assembly put mandates in place assuring that two-year community college program credits would transfer more seamlessly to the four-year college system. But the associate in fine arts degree was not included, said Selby, director of philanthropy, transfer and the arts for Rowan-Cabarrus Community College.

“I created a database of my peers because I did not know them,” Selby said, adding that it led to the organization’s creation. “This was the first time, to my knowledge, that the community college and UNC system faculty shared a common mission. They were keen to come together.”

The organization came together at Waterworks Visual Arts Center in the winter of 2013, in the midst of an ice storm, with an attendance of 20.

The annual meetings are open to administrators, advisoes, part-time and full-time faculty — pretty much anyone who’s interested, Selby says.

This year for the first time, advertising and graphic design programs are included in the conference. Also for the first time, there’s a keynote speaker. Joe Poshek, dean of Irvine Valley College in California, will talk about the connection between neuroscience and the arts.

What hasn’t changed in six years is the location.

“Everyone loves coming to Salisbury,” Selby said. “It’s centrally located, we’ve got a great cultural scene, and the parking is easy.”

“I have so much support from our community,” she added. “I’ve got a great board of directors who is really involved, and I have an amazing support system at the college. This is a sacred week for us.”

With roles in philanthropy and the arts, Selby said, “I get to work in multiple capacities, which I love.”

The Rowan-Cabarrus Community College Foundation assists with the logistics side of the conference, handling paperwork and registration.

If planning and executing a three-day conference sounds intimidating — well, Selby says it is.

As soon as one conference wraps, she starts planning for the next. A survey at the conclusion of this year’s conference will solicit ideas for 2020. Selby also sent out a call for proposals for sessions. She started building the agenda with those ideas, added statewide topics of timely interest, and added cultural and evening activities.

The conference started at the Meroney, but has expanded to include the Norvell.

“The participants love the two spaces,” Selby said, “and we like supporting PPT. There’s plenty of space for breakouts and concurrent sessions.”

Participants will join topical lunch groups in groups of 10 both Friday and Saturday, Selby said.

“We’ll take 200 people and support our local businesses at lunchtime. If you’re willing to be creative, you can host a terrific arts event in downtown Salisbury.”

Taking advantage of the area’s vibrant arts scene, the conference is offering pre-conference events today. These include a music option to visit the North Carolina Music Hall of Fame in Kannapolis or two art options — a walking tour of the Salisbury Sculpture Show or a visit to Waterworks.

Evening gatherings include a happy hour sponsored in the exhibit hall at the Norvell by McGraw Hill, followed by a mixer at New Sarum on Friday with dinner at Grievous Gallery on Saturday.

Selby says these and other activities allow time for conversations between colleagues at community colleges and universities.

“We have hard conversations,” Selby said. “We’re passing off our students to our university colleagues. It’s like we’re co-parenting, so it’s important we’re on the same page.”

That page, she says, is all about serving the students in the best way possible.

Erin Dougherty agrees. A past presenter, she’s an associate professor of theater in costume design at Catawba College who’s attended the conference for the past three years.

“It’s been a way for us to connect with community colleges, and provide some insight on how to make things easier for students to come to a four-year college,” Dougherty said. “It’s a good linkage for us. It’s good to talk with colleagues across the state to see what kind of art is being created, and to talk about our real-world problems.”

Brandon Guthrie is dean of arts and humanities at Cape Fear Community College in Wilmington, one of the conference’s sponsors.

“For faculty members, it’s great for them to come and learn about new developments, so there’s some cohesion among fine arts faculty and administrators,” Guthrie said. “It brings everybody together at the table, and then we branch out after the conference is over and take action on these things.”

Guthrie added that it’s nice to feel part of a statewide organization and the conference.

“I look forward to it every year, because there are familiar faces and we pick up where we left off,” he said. “And it’s nostalgic for me because my grandparents lived in Kannapolis during my formative years.”

“The cool thing about this conference is that we have tangible results,” Selby said. “We have passed six statewide transfer agreements, we have done curriculum revision with concentrated AFAs in music, theater and visual arts, and we’re starting to work toward national accreditation of AFA programs. Those are real things. They work to best serve students, and we are all collaborating. That’s what’s so rewarding to me.”