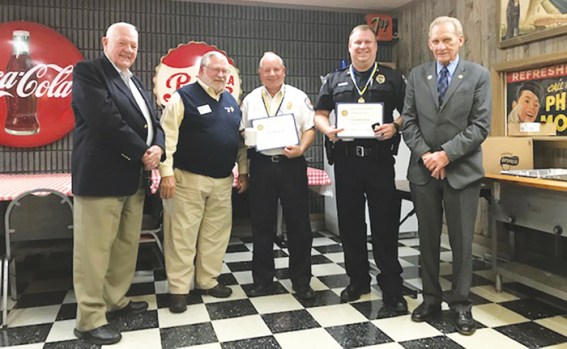 During its meeting this week, the China Grove Rotary Club celebrated the 115th birthday of Rotary International with a program that recognized the town’s fire and police chief as well as the assistant chiefs of both departments.

Police Chief Andrew Deal and Fire Chief Mike Zimmerman were awarded the Paul Harris Fellow recognition, one of the highest accolades given by the Rotary Club.

The award is reserved for Rotarians who make significant contributions — both of money and time — to the work of the Rotary Foundation. Rotarians are allowed to single out community leaders and service-minded people who meet the high standards set by Rotary founder Paul Harris.

China Grove Mayor Lee Withers and Rotary President Jim Morton praised Deal and Zimmerman for their exemplary service and dedication to the town. The awards were presented by Rotary District 7680 Assistant Governor Dick Lewis of Concord.

Certificates of excellence for service above self were presented to Assistant Police Chief David Walther and Assistant Fire Chief Dustin Baker by Morton and President-elect Frank Jones. Walther and Baker were selected for the honors by their peers for dedicated service to China Grove and the south Rowan County community.

“What better way to celebrate our birthday than to recognize these five citizens for dedication and exemplary service to their fellow man and community?” said Morton.

Rotary International celebrates its 115th birthday on Saturday. The club was launched in Chicago on Feb. 23, 1905, by Paul Harris and three business friends.

The China Grove club was chartered in 1936 and is a part of District 7680 in mid-North Carolina.