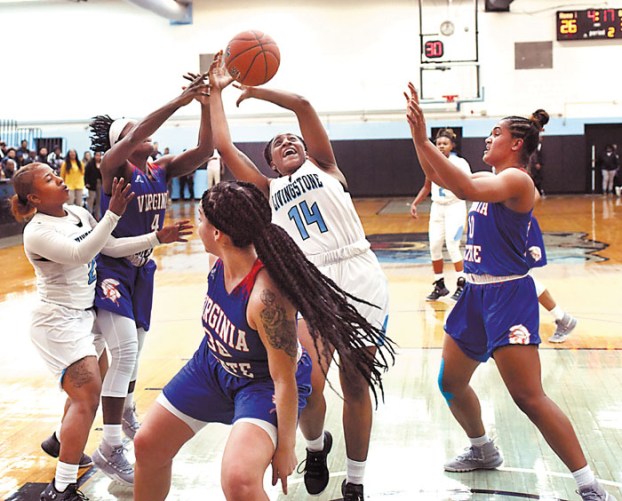 The Blue Bears struggled mightily before a 28-point fourth period put away a hard-fought, 75-67 college basketball win over St. Augustine’s.

The Blue Bears closed the game on a 19-10 run, after the Falcons had definitely put a scare into the home team.

After trailing by as many as 13 points in the third period (42-29), St. Aug’s fought back to take one-point leads on three occasions in the fourth quarter. The Falcons’ last lead came at 57-56, on a jumper from Angela Caraballo with 5:49 left.

LC took the advantage for good on a layup from senior wing Kyala Searcy, making it 58-57 at the 5:08-mark. The Blue Bears slowly began to add to the margin on layups from Asia Green and Kedra Bradley and a 3-pointer from Darra Walker — making it 68-61 with 2:21 left.

The Falcons cut the margin to five points again at 72-67, with 53 seconds remaining, but Searcy and guard Daisa Harris sank free throws down the stretch to ice the issue.

The first half saw both teams struggle — Livingstone with shooting and St. Augustine’s with holding onto the basketball.

The Blue Bears led at halftime, 32-25, despite shooting just 27 percent from the field (10-of-37), including a dreadful 1-of-10 mark from 3-point range. The visitors also limited LC’s second-chance opportunities by out-rebounding the Blue Bears, 19-7.

But St. Aug’s aided Livingstone with 19 turnovers in the first 20 minutes.

LC did manage to get to the free throw line in the second period, making 10-of-12 from the stripe. That led to the Blue Bears leading by as many as nine points twice, the last time at 1:59 left in the half (30-21).

Harris scored 15 points for LC in the first half, including 6-of-8 at the foul line.

Harris did not score in the third quarter and St. Aug’s had a 17-5 run over the final six minutes of the frame, sending the teams into the final period with LC leading, 47-46.

Still, St. Aug’s 30 turnovers offset the poor shooting from Livingstone. The Falcons made 29-of-61 shots from the field (48 percent), but the loss of possessions from the turnovers greatly hurt the visitors’ chances to win their fourth game of the season.

Green and Harris led Livingstone with nine rebounds each.

NOTE: The Blue Bears return to action on Saturday afternoon, hosting Winston-Salem St. at New Trent Gym (2:00 p.m.,) prior to the men’s game.