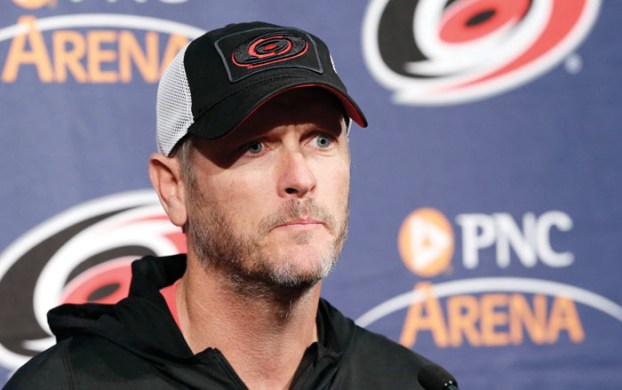 FILE - In this May 9, 2018, file photo, Carolina Hurricanes owner and CEO Tom Dundon takes questions during an NHL hockey news conference in Raleigh, N.C. Dundon is investing $250 million in the Alliance of American Football. Dundon also will serve as chairman of the fledgling eight-team league that began play on Feb. 9. His involvement came together in a matter of days last week, according to Dundon and Alliance co-founder Charlie Ebersol, though Dundon had been monitoring the AAF's development and debut. Ebersol dismissed reports Tuesday, Feb. 19, 2019, that the Alliance was getting a financial bailout from Dundon.(AP Photo/Gerry Broome, File)

Dundon also will serve as chairman of the fledgling eight-team league that began play on Feb. 9. His involvement came together in a matter of days last week, according to Dundon and Alliance co-founder Charlie Ebersol, though Dundon had been monitoring the AAF’s development and debut.

Ebersol said Tuesday that reports the Alliance was short on cash and needed a bailout from Dundon in order to make payroll were untrue. He said the league had a technical glitch in its payroll system that has been fixed.

“Tom’s funds were transferred to Alliance accounts last week, and players have never been in jeopardy of not receiving their earned paychecks,” Ebersol said. “It was a clerical error and has been resolved. The two are unrelated.”

Ebersol joined with Pro Football Hall of Fame executive Bill Polian less than a year ago to create the Alliance.

“This has been an extraordinary undertaking for us,” Ebersol said. “It’s a giant challenge and opportunity, and as a startup you are constantly looking for some peace of mind. When we got out of the first week of games, we saw there was so much interest from investors, and if we had one person who could take care of us for a very long time, that would be great.”

Dundon said the AAF won’t be seeking more investors at this time.

“We won’t bring in anybody for capital. We’re not going to take people’s money,” he said.

“It’s so early into this. We’re all in the entertainment business, so we’re just making sure to continue to do what they have done, which is put out a quality product people want to watch and consume, and hopefully we have the capital in place to take advantage of new opportunities. Things are a lot easier when you have got the capital and connections to execute.”

Dundon also is the co-founder of Trinity Forest Golf Club in Dallas, home of the PGA Tour’s AT&T Byron Nelson tournament; the majority owner of Employer Direct Healthcare, a health care services company; and a primary investor in Topgolf, a sports entertainment company.

The Alliance has teams in Atlanta; Phoenix; San Diego; San Antonio; Memphis, Tennessee; Birmingham, Alabama; Orlando, Florida; and Salt Lake City. It will play a 10-week schedule before its playoffs, finishing on the final weekend of April.

Early response on TV — it has deals with CBS, Turner and NFL Network — and digitally was positive, Ebersol said.

“We think there will be other opportunities,” Ebersol said, “but the fact we took one of the biggest worries of any startup off the table with a partner who has proven he knows how to build businesses — and not build to sell but build to build — is huge.”

MEXICO CITY (AP) — The PGA Tour again is taking a close look at changing the size of its cuts,... read more