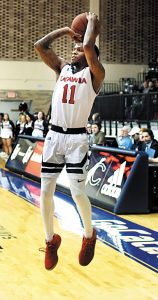 One-point losers to the 10th-ranked Royals at Goodman Gym on Jan. 16, the Indians fell 87-83 in the highly anticipated rematch at Levine Center.

Catawba led 83-79 when Jeremy McLaughlin made a layup with 1:19 remaining, but the Royals scored the final eight points of the night.

With the score tied at 83-all, Shaun Willett scored inside for Queens with 18 seconds left.

On Catawba’s next possession, Jameel Taylor was called for an offensive foul. Then Daniel Carr made two free throws with four seconds remaining to clinch the victory for Queens.

Marcell Haskett poured in 27 for the Indians, shooting 10-for-17 and connecting on four 3-pointers. Taylor scored 14, Jordan McElveen had 13, Devin Cooper had 12, and Malik Constantine scored 10.

Both teams shot the ball in the 48-percent range from the field. Both teams made eight 3-pointers.

Catawba dropped to third place and heads to second-place Lincoln Memorial for another tough road game on Saturday.