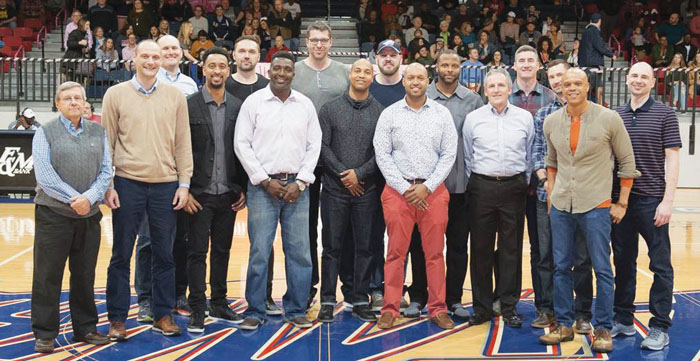 It was a basketball reunion of the powerful 1997-98 Catawba team that brought players back from overseas.  Nezdad Gusic, a 6-foot-6 Croatian, looked tall until 6-8 Davor Krusevljanin, who grew up in Bosnia and Croatia before playing his senior year in Greensboro, walked over to greet him. And then 7-2 Frenchman Gaetan Cotigny towered above Krusevljanin. He filled up the room.

“It tells you a lot about how special that team was when guys come back from other countries,” said Marvin Moore, the South Atlantic Conference Athlete of the Year in 1999. “It’s heavy when you think about 20 years going by. It’s been emotional. Gusic starts crying every time someone new walks in.”

Moore and Wade were the backcourt duo for the Indians and are all-time greats. Both were listed on All-America squads and were first team all-region performers. Both were South Atlantic Conference players of the year — Wade in 1998 and Moore the following season. Both have Catawba Sports Hall of Fame plaques on the wall at Goodman Gym.

Coaches were on hand as well. Assistant Bill Haggerty, a fixture at Catawba from 1984 to 2013, made an appearance.

So did head coach Jim Baker, who guided the Indians through many fine seasons from 1994-95 to 2013-14. He had his best season of all with that 1997-98 squad that went 25-6. Baker was honored as South Atlantic Conference Coach of the year five times, but that was the only season he was recognized as the top coach in the region.

“That team just had the right mix,” Baker said. “We had size, we had defenders, we had scorers, and we were two-deep everywhere. Marvin and Art were great players, of course, but we also had guys who enjoyed doing the dirty work. Jacob Parks (a 6-8 enforcer from Trinity) would knock people down.”

Moore is listed in the Catawba record book not just for scoring, but for huge career totals in assists and steals.

Gusic could shoot. He knocked down 163 3-pointers before he finished at Catawba in 2001. That’s even more than Wade, and not far behind Moore.

Besides scoring more than 1,100 points, Krusevljanin was one of the top shot-blockers in Catawba history.  Tony Davenport, a guard from South Iredell High, made All-SAC during his time at Catawba. Jeremy Carswell, a 6-7 forward from Hickory’s St. Stephens High, made the All-SAC tourney team in 1998. There were a lot of guys on that team who could play.

“More than the games, I remember the practices,” Moore said. “Art and I were very competitive with each other and pushed each other in practice. Guys hated to lose, even in practice. There were times when practices got so hot that Coach would have to stop it. At the time, I didn’t always see it, but hindsight is 20/20. Those tough practices made us who we were.”

While they got after each other like Batman and the Joker in practice, Moore, from Hertford in eastern North Carolina, and Wade, a Virginian who went to high school near Martinsville, were the perfect combination when it was game time.

“Great players and great leaders,” Baker said. “I didn’t have to give many halftime speeches. Art and Marvin had usually said everything that needed to be said before we even got down the steps. I also recall that Art and Marvin called for one players-only practice that I didn’t know about until I started getting chewed out about it the next day.”

That team could do a lot of things and could win in different ways. It may have been the best defensive team in Catawba history, setting the school record for steals and holding opponents to 41.1-percent shooting for the season. That’s also a school record.

On the other end of the court, this was one of the top 10 scoring teams in Catawba history.

Catawba got off to a slow start in 1997-98, losing November non-league games to Pfeiffer and High Point.

The Indians went 6-0 in December, but lost their SAC opener at Lenoir-Rhyne. There was another SAC loss at Carson-Newman in overtime in late January and a two-point loss at Mars Hill in early February.

“But we never lost a home game,” Baker said. “We had a long winning streak going at home.”

Protecting its home floor every time is how Catawba was able to win the SAC regular season with an 11-3 record.

A road win at Gardner-Webb and home victories over Presbyterian and Carson-Newman gave Catawba momentum going into the SAC tourney — hosted by Mars Hill.

The championship game of that tourney — Catawba vs. Wingate — remains a landmark game in Catawba history. Moore (31) and Wade (33) combined for 64 points. Records were set.

“That game was late in my career and provided the capstone for my career,” Wade said. “That game — it was the pinnacle. We played as well as a team as we could possibly play.”

There’s some difference of opinion on exactly how many 3-pointers Catawba made in a row, but it was a lot. The late Horace Billings, who covered that game for the Post, wrote that the Indians made their last 10 3-point attempts of the first half, plus their first two in the second half.

Moore shot 8-for-11 on 3-pointers. Wade was even better. He was 9-for-10 from long range, tying the school record for 3-pointers made in a game.  That meant remarkable 17-for-21 3-point shooting from those two. Baker called it the greatest performance he’d ever seen.

As a team, Catawba shot 21-for-31 on 3s — 68 percent. Four Indians — Davenport, Krusevljanin, Pete Kuhl and Kelvin Pannell — made one apiece.

Fourteen of the 15 players on the 1997-98 team made it back on Saturday to talk over old times and to be saluted by fans at Goodman Gym.

The only 1997-98 team member who couldn’t make it was walk-on guard Chris Montanaro. He’s a chiropractor in upstate New York who competes in ironman competitions.

Apparently, all the members of that team still enjoy competing.

“They were a really good group,” Baker said. “Carswell had asthma, but he never said a word about it, never complained. We didn’t find out about it until the spring of his senior year. It was just a different era. Guys now complain about all sorts of things.”

Moore had a pro career lined up overseas, but a deadly earthquake in the summer of 1999 canceled his basketball season in Turkey. An auto accident in Monaco finished his athletic dreams, but that led him to rewarding seasons as a Catawba assistant coach, and then a career in education where he’s done outstanding things. He received a Distinguished Alumni Award from Catawba last fall.

For Wade, a high school basketball coach in Guilford County before he moved into administration, the 1997-98 Catawba season remains a key influence on his life.

“The guys on that team, it’s not like we talk every day, but we’re still a family,” Wade said. “And I learned so much about team-building and leadership from being part of that special team. Those things help me in my work every single day.”