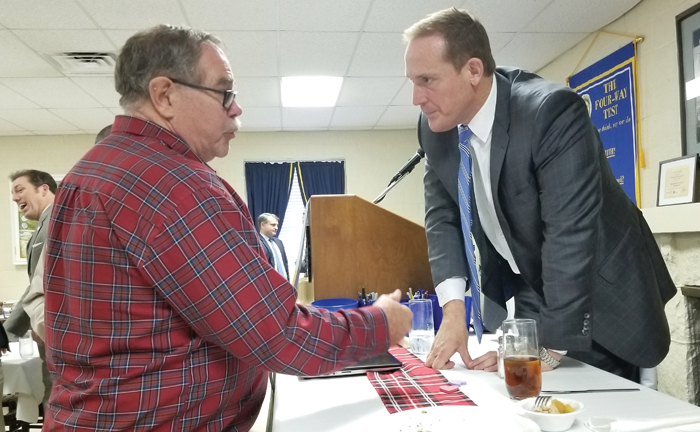 SALISBURY — Republicans are not united on President Donald Trump’s emergency declaration to fund a wall at the U.S.-Mexico border. Rowan County’s representatives in Congress are an example of that disagreement.

On Friday, after not securing the amount of funding for a border wall he wanted from Congress, Trump declared a national emergency. He also signed a funding bill that included $1.4 billion for border security and would avert another government shutdown, but he had initially asked for $5.7 billion for a border wall.

While members of Congress such as Rep. Ted Budd, R-13, say the declaration is within Trump’s powers as president, others such as Rep. Richard Hudson, R-8, and Sen. Thom Tillis, R-N.C., say they’re worried about the precedent it sets.

Budd, who was in town Tuesday to speak to the Salisbury Rotary Club about term limits for elected officials, told the Post the optimal way to provide border wall funding would be through Congress and that he supports the president’s declaration.

“Unfortunately, Congress did not deliver that in the 115th Congress, so I think it’s within his presidential powers,” Budd said.

“Last year, we lost 72,000 people in one year just due to drug addiction and overdosing,” Budd said. “This is a real crisis, and most of that is coming through our borders. Yes we need fencing. Yes we need wall. Yes we need people. Yes we need technology.”

Budd doesn’t support securing the border with only technology solutions such as drones or thermal cameras. A physical wall would be best, he said.

“The main concern is that it be effective,” Budd said. “I don’t care about the material as long as it’s durable and effective.”

Hudson echoed Budd’s frustrations about the lack of money approved by Congress to secure the border.

But Hudson, whose 8th District stretches from Cabarrus and Rowan counties to Fort Bragg, says he is particularly concerned about taking funding from military construction for the wall and wrote a letter to Trump saying as much. Hudson says he’s also worried about whether a Democratic president may try something similar in the future.

“I worry it sets a precedent future Democrat presidents would abuse to achieve a radical agenda like the Green New Deal or to confiscate guns from law-abiding citizens,” Hudson said in an emailed statement. “While this process now plays out in the courts, I continue to ask the administration not to tap into already appropriated military construction funds that our troops and their families need at Fort Bragg.”

Meanwhile, Tillis and Hudson seemingly share the same view about how Trump’s decision might set a bad precedent.

“It wouldn’t provide enough funding to adequately secure our borders, it would likely get tied up in litigation, and most concerning is that it would create a new precedent that a left-wing president would undoubtedly utilize to implement their radical policy agenda while bypassing the authority of Congress,” Tillis said in a statement Friday.

Budd, though, said he’s not worried about any precedent Trump might set by declaring a national emergency for a policy matter.

“That has been set as the argument to prevent him from doing it, but there have been 40 uses of it since the act was established by Congress,” Budd said. “It’s a power Congress gave to the president to call a national emergency. It’s not for something whimsical.”