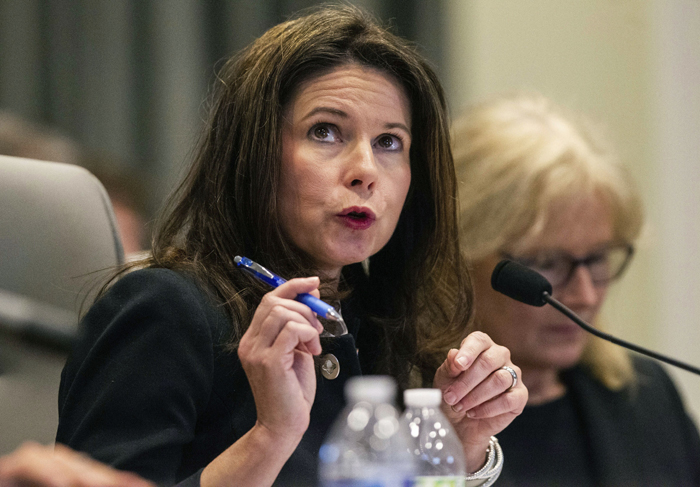 Kim Westbrook Strach, executive director of the State Board of Elections and Ethics Enforcement, questions a witness during the second day of a public hearing on the 9th Congressional District voting irregularities Tuesday at the State Bar in Raleigh.Travis Long/The News & Observer via AP

RALEIGH — The political consultant hired to manage Republican Mark Harris’ campaign in the 9th Congressional District said Tuesday he was surprised by how little he knew last year about a campaign operative’s sketchy activities.

Political operative Leslie McCrae Dowless conducted an illegal and well-funded ballot-harvesting operation last year, the state elections director testified Monday. Dowless’ workers in rural Bladen County testified at a special state elections board hearing that they were directed to forge signatures, collect blank or incomplete ballots voters handed over, and even fill in votes for local candidates who hadn’t earned them.

Dowless was hired to work for Harris and focused on boosting mail-in votes for the GOP candidate in the south-central 9th District. Harris said he sought out and hired Dowless because he secured votes, including for a Republican rival in the 2016 GOP primary.

Harris is expected to testify in the hearing Wednesday. The elections board is expected either to declare a winner or order a new election after the multiday hearing wraps up.

Harris decided to deploy Dowless before Andy Yates and his firm, Red Dome Group, began working for his campaign. Yates said he was instructed to pay Dowless but said he didn’t know about the legal trouble Dowless faced after the 2016 general election. That was months after Harris lost a primary election to incumbent Rep. Robert Pittenger and discussed with an attorney whether to challenge Dowless’ surprising results for a third GOP candidate.

Republican officials never signaled the risk of trouble ahead, Yates told the elections board under questioning. They didn’t inform him that Dowless’ work collecting mail-in ballots in 2016 was sent to federal prosecutors for potential criminal prosecution, Yates said.

“It shocks me that they didn’t,” said Yates, adding he thought GOP officials had an obligation to warn him about Dowless.

Yates testified he told state Republican Party Executive Director Dallas Woodhouse the day after the primary that Dowless was working for Harris, and Woodhouse raised no red flags.

Woodhouse told reporters after the hearing that losers in party primaries often voice complaints, but the party machinery can’t get involved in intraparty campaign spats. Woodhouse said when nothing happened to Dowless after accusations of 2016 ballot-harvesting were forwarded to prosecutors, “it was my belief that everything was legal.”

Yates said he initially believed Dowless’ history of delivering big vote results in Bladen County involved effective and legal methods. Yates insisted that had he known about Dowless’ methods, Harris would have had to make a choice about cutting him or Dowless.

“If Dr. Harris had told me he didn’t know about it, I would have advised him that we needed to immediately terminate our relationship with Mr. Dowless,” Yates said. If the Republican candidate wouldn’t, “I would have told Dr. Harris that I need to resign from the campaign.”