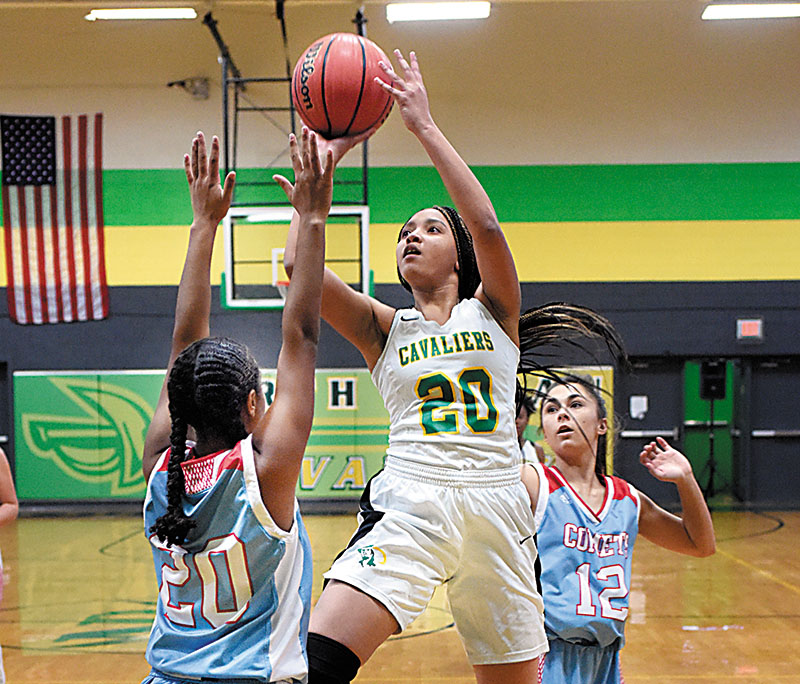 Wayne Hinshaw / for the Salisbury Post North Rowan’s Hannah Wilkerson drives on North Stanly’s Lexi Goode. The Cavaliers took down the Comets, 51-39, in the first round of the YVC tournament Monday night.

SPENCER — North Rowan freshman Hannah Wilkerson was under the weather on Monday.

Her father (head coach Lamar Wilkerson) and grandfather (assistant coach “Papa” Wilkerson) told her this was one of those times she had to be tough, that she had to be there for her teammates in the first round of the Yadkin Valley Conference Tournament.

And she was. Hannah drove for four 3-point plays, scored 22 and led the Cavaliers to a 51-39 win against North Stanly.

“My stomach hurt a little bit, but this was a big game for me and for my team,” Hannah said. “We all had our roles to do, and we did them.”

It’s been a successful family affair for the surprising, third-seeded Cavaliers (14-11).

They started the season 3-6, but they’ve been a different squad since early January. They became a pretty tough 1A team when they added bouncy forward Jamiya Daniels. Daniels and teammate Makiya McDaniel did a job on the boards against North Stanly.

It wasn’t a smooth start for the Cavaliers, who couldn’t get anything to fall. They led 7-3 after the first quarter.

“We missed so many shots right at the basket,” Coach Wilkerson said. “North Stanly is well-coached and had changed some things up defensively since we played them last week, and we couldn’t make anything. But we’ve been there before. Defense is our constant. We kept working on defense. That kept us in it until our offense could come around.”

North Rowan point guard Natavia Taborn got points off her sticky defense in the second quarter, and senior Taren Sherrill came off the bench to make the first 3-pointer for the Cavaliers. North Rowan took a 23-16 lead to halftime.

With 6:36 remaining, North Stanly’s defense forced Wilkerson to go to her left, so she showed she could do that. Her tough, three-point play put the Cavaliers up 37-28.

“You know if you just saw Hannah walking around the school you’d never know she played ball,” Coach Wilkerson said. “She has a very humble spirit, but she’s a kid with a passion for basketball.”

North Rowan made 20 free throws in the game, more than twice as many as North Stanly. That was the biggest difference-maker.

With 2:10 remaining, Wilkerson grabbed a defensive board in traffic and dribbled coast to coast. She wiggled through three defenders, stayed focused on the rim through hard contact and had herself another three-point play. That made it 46-33, and that was the last straw for a North Stanly team that had fought a more talented squad tooth and nail.

“I didn’t feel great, but I was never nervous,” Hannah said. “I just had to go out and play. It was our defense that won this game for us. When you play good defense, offense follows.”

That’s one of the things her father taught her, just as his father taught him. Three generations of Wilkersons had a lot to feel good about on Monday.

North Rowan will get its third shot at second-seeded Gray Stone in a semifinal on Wednesday at 4 p.m. at South Davidson.