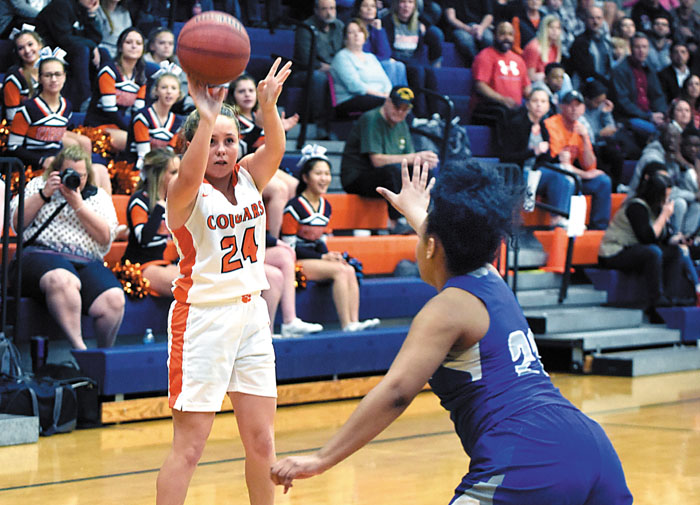 Wayne Hinshaw file photo/for the Salisbury Post ... Carson guard Maci Cooper (24) shown in an earlier game against Statesville, made five 3-point shots to lead the Cougars past East Rowan, 59-22, Tuesday night, in semifinal game at the NPC Tournament in Statesville.

STATESVILLE — The only bad thing about being the Cinderella of the North Piedmont Conference girls basketball tournament is that eventually, midnight strikes.

One day after posting a headline-grabbing first-round upset, East Rowan was no match for top-seeded Carson in Tuesday’s 59-22 semifinal-round loss.

“At this point in the season, you have to play every game like it’s your last,” winning coach Brooke Stouder said at Statesville High School, where Carson (24-1) limited East to nine field goals and secured a berth in Friday’s championship game. “So this week, we have to win to move on. And next week (in the 3A state playoffs), we’ll have to win to move on. East obviously played a solid game last night, but what we can’t do is take anyone for granted.”

Not even fifth-seeded East (14-12), a team the Cougars trampled twice in regular-season matchups. The Mustangs surprised everyone but themselves with Monday’s win against West Rowan and were brimming with confidence before yesterday’s tipoff.

“After beating West last night, how could we not be?” said East coach Kevin Holland. “Everyone knows West is good and we played really, really well. Tonight, we had a pretty good look right off the opening tap, but couldn’t get it to fall. Then it pretty much went downhill from there.”

Grace Eagle failed to convert that breakaway layup attempt, opening a window for Carson to score the game’s first six points and build a 13-3 first-quarter lead. By halftime, it was 28-5.

“We thought they were going to be fired up and come out ready to play,” said Carson’s Maci Cooper, the game’s high-scorer with five 3-pointers and 15 points. “But they struggled all night. We brought our ‘A’ game, anyway.”

Carson shot 47 percent from the field (22-for-47), including 10-for-23 from beyond the arc. After building a commanding lead in the first two periods, the Cougars hit five straight 3-pointers to start the second half. Sophomore Colbie Perry’s tape-measure shot from the right side fueled an 11-1 spree that gave Carson a 45-8 edge with 2:39 remaining in the third quarter.

“Three-point shooting is definitely a strength of our team,” Stouder said. “It has been all season. The nice thing is we have a lot of people who can shoot it. We don’t have to rely on one or two of them to have good nights.”

“That’s just what they do,” Holland added. “They knock ’em down. Every position, every player can shoot it.”

“I think we just came in prepared,” said Cougars’ guard Ellie Wilhelm. “We played solid defense and knocked our shots down.”

Holland spent much of the night peering under the hood, tinkering with East’s engine. “It was just bad defense on our part,” he said. “We played man, we played 1-3-1, then 3-2 and 2-3. I played everything. Nothing worked.”

The final three minutes amounted to little more than a victory lap. Carson’s Hannah Isley maneuvered for a layup from the left block, then found space for another bucket from the right. Cooper’s last-minute 3-pointer capped the scoring.

“Either way, we have to win to keep moving on,” said Wilhelm. “We have to get it done on Friday.”

NOTES: Carson, the defending conference tournament champ, has won eight straight games. Its 51-41 loss at Statesville on Jan. 18 remains the only blemish on its near-perfect complexion. … Cooper shot 5-for-7 from three-point range and Wilhelm was 3-for-4 from long distance. … East has dropped four of its last five decisions but could land a 3A state playoff berth. Holland reported the Mustangs were ranked 44th by Max Preps before yesterday’s tipoff.