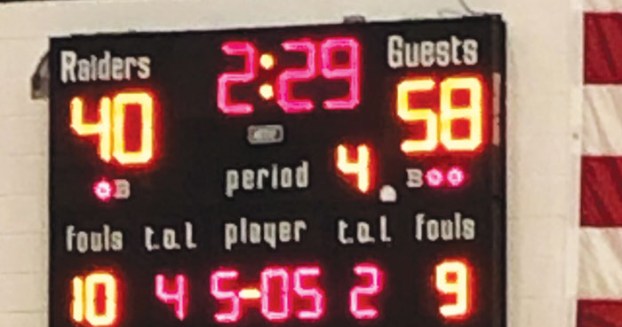 Amy Cosey/Statesville Record & Landmark ... The scoreboard at North Iredell High School shows that the boys basketball game with East Rowan on Friday was ended after a fight between the teams. 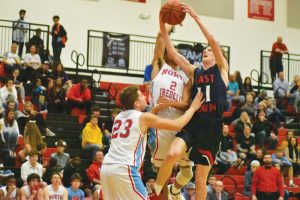 East Rowan’s boys won their last basketball game of the season but in Friday night’s case, there was no celebration.

The Mustangs won the game, 58-40, over North Iredell in Olin, but the contest ended with 2:29 remaining on the clock, after pushing from two players escalated into a bench-clearing fight.

The game officials stopped the contest at that point. Reportedly, fans were also involved, which has prompted an investigation by the Iredell County Sheriff’s Office, according to the Statesville Record & Landmark.

The Record & Landmark reported that Iredell County Sheriff Darren Campbell said his detectives are reviewing video in an attempt to determine exactly what happened and if criminal charges are warranted.

Campbell said that several players from both teams left their respective benches and a fight broke out.

Iredell-Statesville Schools’ Public Information Officer Boen Nutting said, in an email, that administration is working with game officials and the North Iredell High School staff to complete a review of the fight at the end of the contest, which was the final game of the regular season for both teams.

East Rowan was to have been the No. 4 seed in this week’s North Piedmont Conference Tournament and North Iredell was the last-place seed for the six-team league. Now, the season is over for both the Mustangs and Raiders. The tournament now moves straight into the semifinals for the remaining four schools — Statesville (1), South Iredell (2), Carson (3) and West Rowan (5).

Nutting said the Iredell school system is committed to learning exactly what happened. “We are committed to getting all the facts and working with these agencies to be able to put factual information out to our stakeholders. It is imperative that we have processes in place to reduce the likelihood that incidents like this occur in the future,” she said.

Dr. Art Paschal, athletic director for Rowan-Salisbury Schools, confirmed on Monday that East Rowan’s season is over, as the officials ejected everybody on the team for fighting, or at least, for coming off the bench.

“As a result, the (North Carolina) high school athletic association’s rules say that if you have three ejections for fighting during the course of the year, you cannot participate in the state playoffs — or if you have six ejections for any reason, you cannot participate in the state playoffs,” said Paschal. “So, in one swoop, we’re in violation of both circumstances … so the season is over.”

Paschal, who had been out of town and was driving back on Monday afternoon, said that no decision has been made whether to appeal any of the ejections or suspensions.

“The first video I’ve seen, you couldn’t make out a whole lot,” said Paschal. “You could see that something was going on, but it was hard to see details. Apparently, there is another video waiting on me to see, one that is much clearer.

“One of the East ADs was at the game and witnessed everything,” continued Paschal, “so we’re just moving forward right now to see if an appeal on behalf of maybe a few kids from East Rowan is warranted. The NCHSAA rules state that if you leave the bench area, during a fight, you are ejected for fighting. That’s hard, but that’s the rule. We’re trying to gain as much information as we can and I don’t think it’s going to change anything, but that’s where we stand right now.”

Paschal went on to explain that if a student is ejected in basketball for fighting, it’s a four-game suspension — if the athlete plays a spring sport.

“It carries over from season to season, but not year to year,” added Paschal. “So at the end of the school year, for example, an underclassman who doesn’t play a spring sport, it doesn’t carry over to say, football, next school year.”

The situation is similar to one in February 2016, when male basketball players from North Rowan and Salisbury got into a scuffle in the regular season finale. Enough players from both teams were deemed involved that neither squad advanced to the Central Carolina Conference Tournament or the state 2A playoffs.

“Just like with that incident, I hate that this happened Friday night, but it did and we’re going to comply with the high school association rules,” said Paschal. “Again, we’re just trying to figure out if there can be an appeal on anybody’s behalf from East Rowan. But you have to have video evidence to support that, so I’m interested to see the other video upon my return.”

As far as the Iredell County Sheriff’s Office investigation goes, Paschal hopes that no fans went too far on Friday night, but if they did, he will have no sympathy for them.

“No one has contacted me about that part of it,” added Paschal. “But I tell you, good for them (law enforcement). If there was somebody there as a spectator who wasn’t doing what they were supposed to do, I hope they throw the book at them. I hope that they are able to find the culprit, if there is one.”

No one at East Rowan High School chose to comment on Monday, referring the Salisbury Post to the RSS office.

Donna Swicegood, sports editor at the Statesville Record & Landmark, contributed to this article.