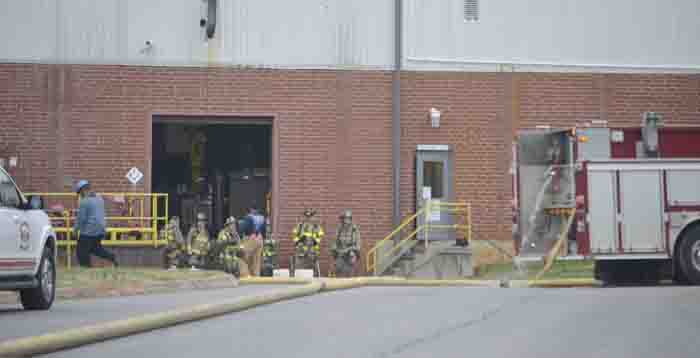 Three people were injured Sunday at Granges, formally Norandal, at 1709 S. Jake Alexander Blvd., after a furnace door blew off inside the plant. The people were assessed by Rowan EMS at the scene, but were not taken to the hospital. Salisbury Fire Department crews and multiple other agencies responded. Shavonne Walker/Salisbury Post

The explosion occurred shortly before 2:30 p.m. at what is the former Norandal plant at 1709 S. Jake Alexander Blvd. The furnace door was thrown about 50 yards, said Battalion Chief Jay Baker of the Salisbury Fire Department.

Baker said the three plant employees were near the furnace when the door flew across the room. Their injuries and were checked by Rowan EMS crews on the scene, but the declined to be taken to the hospital.

There was extensive damage to the area near the furnace as well as the back of the building where the metal exterior walls were distorted.

The city Fire Marshal’s Office also responded to the scene.

The cause of the explosion is under investigation.

Fire crews were positioned at the front of the plant as well as the rear. Other crews were on standby at the entrance.

No other injuries were reported.