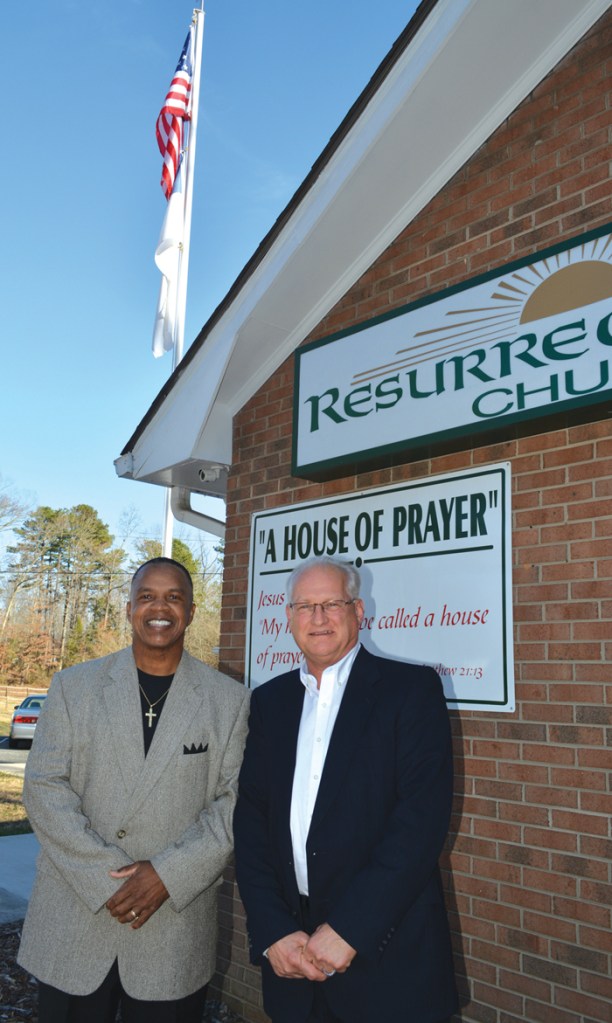 Dr. Joseph Morrison of York, S.C., left, a friend of the Rev. Jerry Snipes, right, is guest preacher for the homecoming service Feb. 24

The unassuming brick building has been home to the non-denominational congregation since 2016. The church was founded in the living room of The Rev. Jerry Snipes’ home in December 2001. Snipes says that his wife, Melissa, and their adult daughters, Sarah and Clara, have been an integral part of the church since its inception. The Snipes have two grandchildren and one on the way.

Shortly after its beginning, the congregation met in the chapel of Summersett Funeral Home — where Snipes still works one day a week — for 18 months. Snipes led what he calls “church in a box” from 10 a.m. to noon, and those services began on Easter 2002. “That was a blessing when you’re starting from nothing.”

The group met at Salisbury Woman’s Club for a short time before having a storefront at the Empire Hotel on Main Street. That was home for 12 years.

“That was a different kind of church,” Snipes says. “We’d pass out doughnuts and cider for Friday Nights Out.”

In March 2016, Snipes discovered that the Newsome Road property, used by several denominations since being built in the early ’70s, was available. Within a week, the congregation had voted to purchase the property. After cleaning, painting and some remodeling, members met for the first time here on May 15, 2016.

The congregation now meets each Sunday morning at 10, with 7 p.m. services on Wednesdays, and a service of prayer and healing on the fourth Sunday of each month at 6 p.m. “Unplugged,” the Sunday School program, takes place from 9 to 9:30 a.m. each Sunday.

“We have a teaching time and a question-and-answer time,” Snipes says. “If you want to ask, that’s the way you learn.”

With about 100 members, the congregation has about 40 to 60 members who regularly attend each week, Snipes says. “We are a small congregation, but as far as outreach, I’ve never seen people do what this group does.”

The church is heavily involved with Operation Christmas Child, not only collecting shoeboxes, but working in the warehouse and with deliveries. They also do mission work through Samaritan’s Purse and with Sudan Interior Mission. Locally, they support Pregnancy Support Center, Shield-a-Badge, and the Wings of Eagles therapeutic horseback riding program in Mount Pleasant.

Snipes says his congregation is a unique group, with some members who hail from Germany, Sri Lanka and India.

“We are sharing the Gospel and the life of Jesus Christ with all peoples,” he says. “It’s a special group of people from all walks of life.”

The church has sent letters of invitation to members, visitors, and those who have moved out of town. Local musician Matthew Weaver will be joining the church’s small band, Snipes says, and a covered-dish luncheon will follow the service.

“It’s going to be a morning of celebration,” he says.

Dr. Joseph Morrison of York, S.C., a friend and fellow chaplain from the Billy Graham Evangelistic Association’s Rapid Response Team, will be guest preacher. The two met in 2011 during training and have been friends ever since. When Snipes’ older daughter married in 2014, Morrison helped him conduct the service.

Morrison’s sermon title will be “Welcome Home,” and he’ll preach on the story of The Prodigal Son.

“God longs to accept people back,” Morrison notes. “Like that father, he’s standing there waiting for you to come home. I’m humbled for the Lord to put me on Jerry’s heart to be here for homecoming. I don’t preach sermons to make people feel good, I deliver messages to make people do good.”